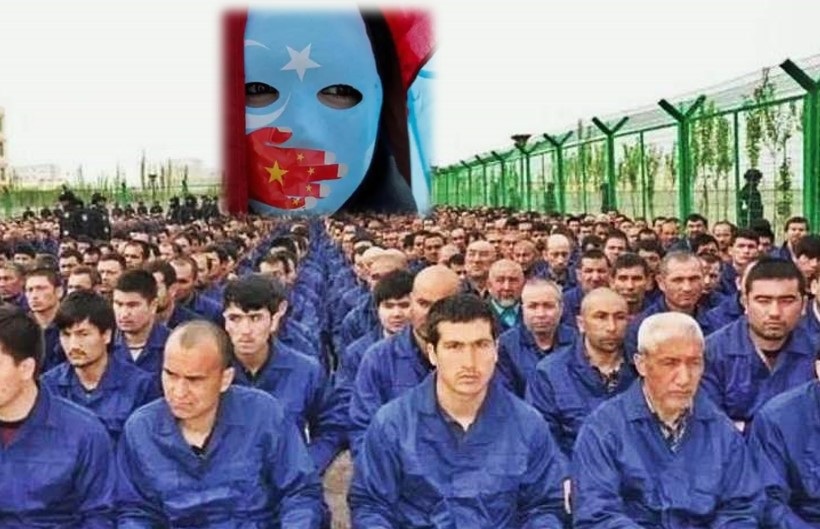 In a 2019 documentary, a Chinese Police officer in East Turkistan described the situation Uyghurs face with in following words: “What human right? They’re not seen as a human being to have a right.” This explanation is the simplest description of the persecution experienced by millions of Uyghurs in their homeland. What is being done to the Uyghurs, Kazakhs, Kyrgyz, and other Turkish communities living within Chinese-occupied areas is, to speak plainly and honestly, a genocide committed by the Chinese Communist Party (CCP).

The historical roots of the genocide in East Turkistan, go back to when the CCP began its occupation in 1949. Since the days of Chairman Mao Zedong, the CCP regime has developed a multitude of programs to Sinicize and assimilate the Uyghurs, as well as the land belonging to them. Every attempt has been made to forcibly transform this community in appearance, language, religion, and culture. The deliberate migration of Han Chinese into the region, compulsory birth control, and the gradual banning of elements of the Uyghur language and culture are all visible, but are not necessarily novel. During the so-called Cultural Revolution in 1966, all schools in East Turkistan were closed. Academics, scholars, and other prominent Uyghurs were imprisoned. Others were tried and shot in so-called people’s courts. Some were sent to camps similar in style to Stalin’s Gulags.

The people of East Turkistan were saved from this oppression and persecution for a short time in the 1980s. The Beijing government took immediate measures to prevent East Turkistan from being affected in the face of the Soviet Union’s invasion of Afghanistan in 1979 and decided to grant the Uyghurs the freedom denied to them in the past. However, this two-faced policy, the “false spring” that the Beijing government created, ended quickly. After Tiananmen Square in 1989, the Uyghur people were once again set as a target, as ‘the society to be destroyed by assimilation.’

Between the 1990s and 2000s, the Uyghurs resisted the pressures of China. Social events were darkened by the presence of the party, and turned into witch hunts by the Beijing government. The opportunity sought by the Beijing regime came to pass with the attacks of September 11th. The government immediately used the USA’s ‘war on terror’ concept for its own ruthless interests. It has transformed its policies aimed at exterminating the Uyghurs into the concept of a “war on terror.” Adding concepts such as “separatism” and “extremism in religion” to its argument allowed it to develop its genocidal policies to attack Uyghurs at every level.

Indeed, what happened during the 2008 Olympics is striking. The Olympics, which is meant to create an environment of peace and love through sports competition, where the international community competes together, was cruel for the Uyghur people. The Beijing government kept thousands of Uyghurs in prison for months without cause because it claimed to fight terrorism. Now, the regime has ruthlessly switched to a more offensive method. With new laws and regulations every year, steps have been taken to turn the lives of Uyghurs into a waking nightmare. Starting from Urumqi, every city was equipped with security cameras, security checkpoints were established at every 500 meters, and a variety of other invasive security measures were implemented.

In 2013, the Beijing regime announced the Belt and Road Initiative (BRI). The projects that will bring the Chinese Communist Regime to the domination of the vast geography stretching from Far Asia to Europe have been announced to the world, with tales of “investment, employment, common prosperity.” However, for the Beijing government, there is a major obstacle to these projects. This obstacle is East Turkistan, which is located at the center of Central Asia.

The lands of the Uyghurs are a hindrance for China, which wants to dominate the world. For this reason, they wish to destroy Uyghur presence in that region. A year after the announcement of the BRI, large construction projects began to be built on the edges of the cities in East Turkistan. It was widely heard that an officer said to an Uyghur who saw these constructions, “You will all be placed here soon.” The Beijing regime was building its first concentration camps already.

Attempts to move Uyghurs into Concentration Camps began in 2014. The policy of erasing the Uyghur identity and repression, which was carried out in small groups for a short period of time, soon descended on the whole population like a black cloud. President Xi Jinping, who visited East Turkistan at that time, said “never show mercy”; a sign of the ruthlessness the new policies had. Finding the rulers there weak, the Beijing government sent Chen Quanguo, who had previously served in Tibet and was known for his oppressive policies to the Tibetan people, to East Turkistan. He gave the order to his subordinates to “gather whoever is to be gathered.” Uyghurs were taken in groups on the streets of East Turkistan and deported to concentration camps. For this reason, since the beginning of 2017, Uyghurs in the diaspora have been losing contact with their relatives. Some do not reply again, while others, such as this article’s author, have heard the words “don’t call us again” from their families before they disappear entirely.

When the international community began to react, the Chinese regime clung to the lie that “we are not throwing anyone into ‘concentration camps’, they are in the vocational training programs.” The regime even announced that those in the authorized concentration camps in East Turkistan had graduated in 2019. The answer to whether there is real graduation from the camp was given by the Australian Strategic Policy Institute (ASPI) report. According to ASPI’s report, tens of thousands of Uyghurs, which today is now in hundreds of thousands, work like slaves in factories producing goods for Western companies. 80 world-famous brands (Nike, ZARA, H&M, and others) use the bloody labor of the Uyghurs to increase profit. China builds its economic dominance over the world on top of the lives of the people of East Turkistan. The CCP builds factories and workshops next to each concentration camp. In short, as the CCP officials say, there is no graduation; only the innocents who have been brainwashed and whose Uyghur identities are erased and turned into tools for the capitalist purposes of a so-called “communist” regime.

What is going on in these so-called education or vocational training centers? It is necessary to listen to the stories of those who testified at the Uyghur Genocide Tribunal, which took place in London, and the press organizations. Qelbinur Sidik, who was forced to work in the concentration camps, reported that people were persecuted with torture devices from electric chairs to electric sticks. Women, especially young girls, were raped and even witnessed officials boasting among themselves that they had raped Uyghur women. Tursunay Ziawudun told of a girl that was taken away from the wards every night. The girls who returned were crying silently in a corner, and she herself was taken to a dark room and raped many times. Omer Bekali, who came to the Genocide court with his hands and feet chained as they were in the camp, showed in truth how China behaved. China’s concentration camps are where people are constantly experimented on, some of whom are given unknown drugs, become ill, and disappear. The Chinese Communist Regime even sells the organs of Muslim Uyghurs to wealthy Muslims in the Middle East, calling it “halal.”  According to the UN Convention, the crimes described in the camps are genocidal.

So, for what reasons are Uyghurs sent to concentration camps? The crimes are listed in the “Karakax List”, which was made public a while ago: praying regularly, participating in religious conversations, covering one’s head, not having a passport, calling relatives abroad, traveling to countries with a Muslim majority, and more. If these crimes are taken into account, then half the world should be sent to concentration camps. The truth is that the CCP offers “No mercy” in carrying out Xi Jinping’s orders. With this policy, East Turkistan women are forced onto birth control, babies are killed in the womb, and the population is systematically reduced to wipe out the Uyghur generation. Dr Adrian Zenz stated, the Uyghur population in East Turkistan is expected to decrease to 2.6 million from above 10 million by 2040. This is included in the article “Measures to Reduce the Group’s Population” in the UN Genocide Convention. The children of Uyghurs staying in concentration camps are also victims of the genocide. It is stated that an estimated 900,000 children were taken from Uyghur families, most of them were placed in orphanages of the CCP, and some were sent to Han Chinese families. The Beijing regime, which aims not to have a single Uyghur left in East Turkistan, wants to bring about demographic change by forcibly marrying young Uyghur girls to Han Chinese men.

What is happening in East Turkistan is a genocide. The victims of this genocide are the Uyghurs, Kazakhs, Kyrgyz, and other Turkish communities. The international community has moral obligation to bring it to an end swiftly, and clearly.

Abdulhakim Idris is the Inspector General of the World Uyghur Congress, and Executive Director of the Centre for Uyghur Studies.

Jun 21, 2021
Can't help but feel sorry for the people who have now suffered for generations first at the hand of Brutal proselytizing Islam and now at the hands of Communism. What is especially unfortunate for Uyghur people is their faith, which has a bad reputation across the world but we must not forget that people are more important than their faith. And the Uyghurs themselves must realize it too. China than looses the last argument it has against them- The fundamentalism in their faith. The culture and language of these people must be protected at all costs. Communist China must bow down.

Jun 20, 2021
It's really astonishing. What is Pakistan, advocate of Muslims even if they're residing on moon or on any other planets, doing? Astonishing to note inhuman behaviour towards minorities of non muslims by Muslim countries including those who are surprisingly supporting inhumane regime such as in China and Pakistan.

Jun 19, 2021
Sir The cry of atrocities went unheard deliberately by the Muslim World and failed to raise the voice against China. Now MBS in a new role as a reformist should lead from front and get other world leaders in the act. India should also play active role here to stop the atrocity against the Uyghurs Their has been lot of talks hope to get see some real action soon.

Jun 19, 2021
I understand that the condition of Uygers is pathetic but their beliefs are not worthy I feel there should be major overhaul needed in Islam as proposed by Crown prince of Saudi Arabia. it is the need of the humanity🦜

Jun 19, 2021
Its high time a strong global narrative needs to be pushed up to deter the Chinese mindset. India should issue a statement on the this brutality. xi zinpig has to be shown his limit.

Jun 18, 2021
It would be in India’s interests if it works on a plan to help resettle the persecuted Uyghurs in areas outside China.

Jun 18, 2021
This is the eye-opening article and what's happening in China is really really a shameful act which should be stopped .