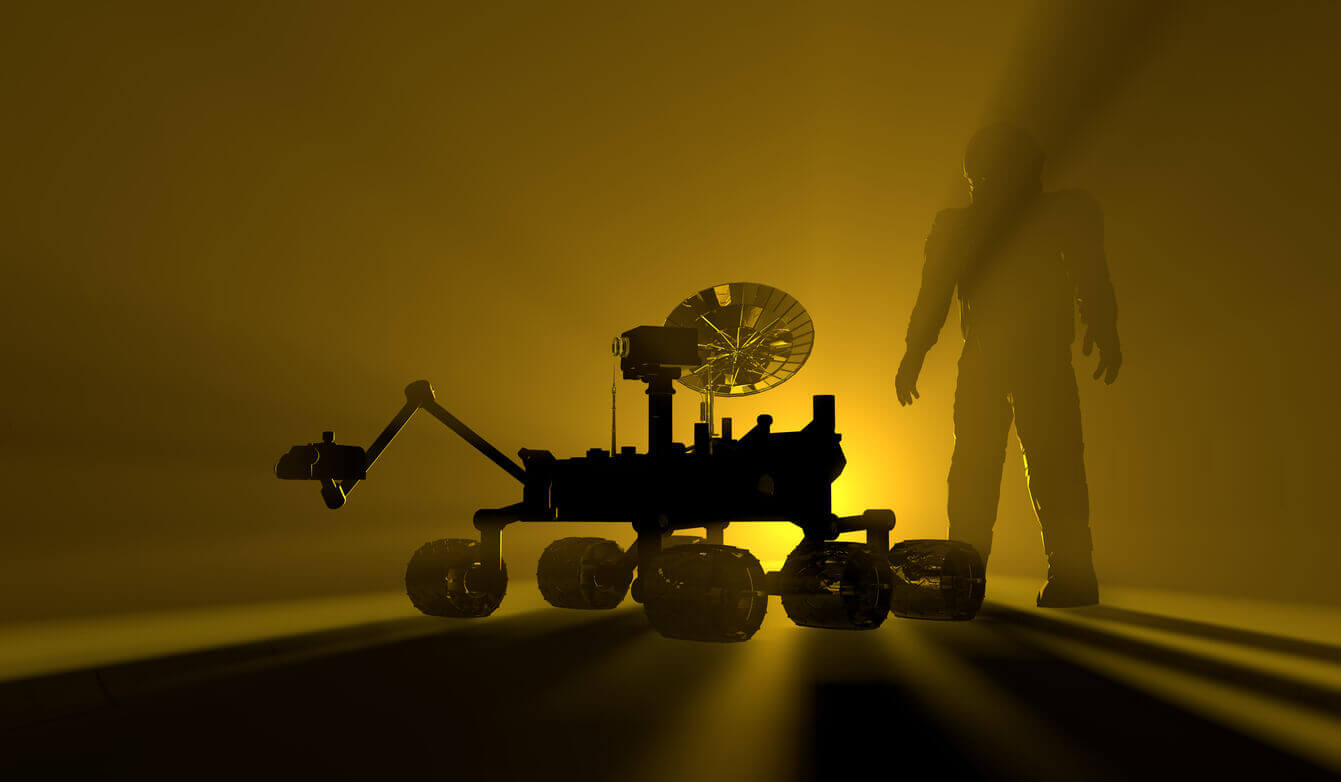 Outcomes in battles are a fallout of the side with better morale and will; but also the one with superior training and equipment. Indeed, all other factors considered, the side that uses technology to its advantage in any duel, skirmish or battle is more likely to win than not.

One of the entries in the Compendium of Problem Statements- 2020, an Indian Army Design Bureau (ADB) publication that seeks tailor made technology for the Indian Army (IA), is the entry for Tactical Unmanned Ground Vehicle (UGV) for close quarters surveillance and combat, originated in consonance with the UGV employment philosophy that has been formulated for the IA.

A UGV is a ground based platform that operates without human presence on-board. While small robotic systems for disposal of explosive devices as well as for other purposes have long been in use, the Armed Forces are now exploring the utility of the UGV for comprehensive combat support missions on the battlefield. The UGV is the land forces’ answer to Unmanned Aerial Vehicles and Remotely Operated Underwater Vehicles of the other two Services. These machines are employed by Armed/ Police Forces in situations where there is a probability of excessive fatigue or danger of casualties to personnel, as also where it is inexpedient to involve human presence.   The system architecture of the UGV will involve sensors for navigation / environmental feedback and could incorporate an onboard computer for autonomous functioning or could relay sensor acquired information to an operator who would then remotely control the vehicle.

In the early 1920s, a periodical magazine of the Radio Corporation of America, a leading electronics company, featured an article on an unmanned, remotely operated, radio-controlled car, a technology which showed promise in future adaptation to armoured vehicles. In November 1939, during the Soviet-Finnish War, the Soviets surprised their adversaries by fielding unmanned, radio operated and remotely controlled tanks .  These ‘Teletanks’ were mounted with machine-guns and remotely controlled from another tank. Their success saw the employment of at least two Teletank battalions against the Axis Powers in the initial stages of World War II. Not to be left behind, the Germans developed the Goliath Light Charge Carrier, a tracked UGV used by the German Army as a disposable demolition vehicle during World War II. The first significant development of a ‘true blood’ UGV is attributed to the Defence Advanced Research Projects Agency ( DARPA) of the US- this machine was equipped with a camera, sensors and an on-board computer to guide navigation and assigned robotic tasks. Post further development in the field, as part of the Strategic Computing Initiative for research into advanced robotics and Artificial Intelligence (AI), DARPA demonstrated the Autonomous Land Vehicle, the first UGV capable of complete autonomous navigation.

CVRDE commenced work on UGV development in 2007. The first significant milestone was the development of a remotely operated modified BMP- the NAG Anti-Tank Missile carrier (NAMICA). As a consequence of this development, CVRDE commenced the Mission Unmanned Tracked (MUNTRA), a technology demonstrator project credited with kickstarting strides in the associated  robotics field, which witnessed development of a number of frontline technologies including drive-by-wire (DBW), tele-operation, autonomous navigation system (in association with CAIR), multi sensor data fusion (MSDF), remotely operated surveillance technology, Chemical, Biological, Radiological & Nuclear (CBRN) reconnaissance and mine detection payloads, to name a few. In addition, CVRDE was also one of the four labs actively involved in the development of a high speed UGV based on a Honda- CRV as an Indo-Singapore international collaboration project.

Project MUNTRA.  CVRDE undertook Project MUNTRA in 2007. The objective of this project was to convert three BMP-II APCs into teleoperated/autonomous UGV platforms and to implement payloads for unmanned missions of surveillance, CBRN reconnaissance and mine detection/marking missions. The system configuration consists of three UGVs (one for each of the payload missions) and one base vehicle. The developed UGVs are named as MUNTRA-S for surveillance missions, MUNTRA-N for CBRN reconnaissance missions and MUNTRA-M for mine detection/marking missions.

The base vehicle is MUNTRA-B, from which the UGVs are tele-operated through wireless communication links, which are also used to relay video footage and other sensor data. The media used will typically be radio frequency (RF) communications, satellite links, or wireless fibre-optic, as UGVs will often require non-line of sight (NLOS) communications to support operations in urban and cluttered environments. The incorporated DBW technology allows the conversion of manual driver’s controls into electronically operated controls by way of electro-mechanical actuators.

The MUNTRA-S uses a suite of surveillance sensors, consisting of Short Range Battlefield Surveillance Radar (SR-BFSR) and an integrated electro-optics suite mounted on a retractable carbon composite lightweight mast. This surveillance suite allows a single operator to carry out surveillance upto 18 km under all weather, day/ night conditions. The full range of the collected surveillance data is transmitted to the Base Vehicle, where it is displayed for the information of the operator. The surveillance suite was successfully trial evaluated by the Central Industrial Security Force ( CISF) in January 2017.

The MUNTRA-M is equipped with mine detection sensors in the form of Ground Penetrating Radar (GPR) and Vapor Detection System (VDS). Once the mine is detected by the GPR, the vehicle is automatically stopped and mine presence confirmed by VDS. The location of the mine is then physically marked with spray paint and geo-located on the Graphic User Interface of the Base Vehicle. 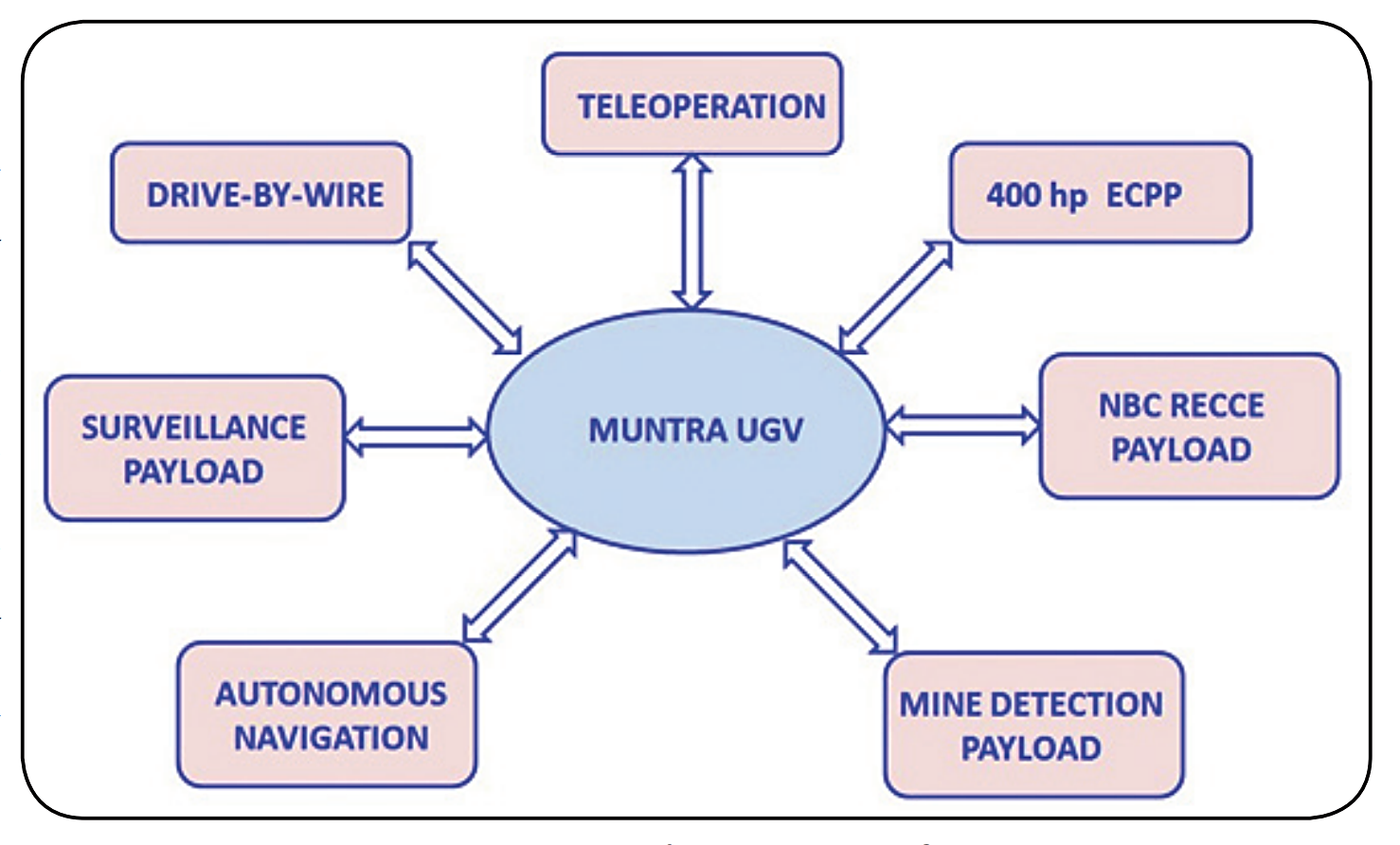 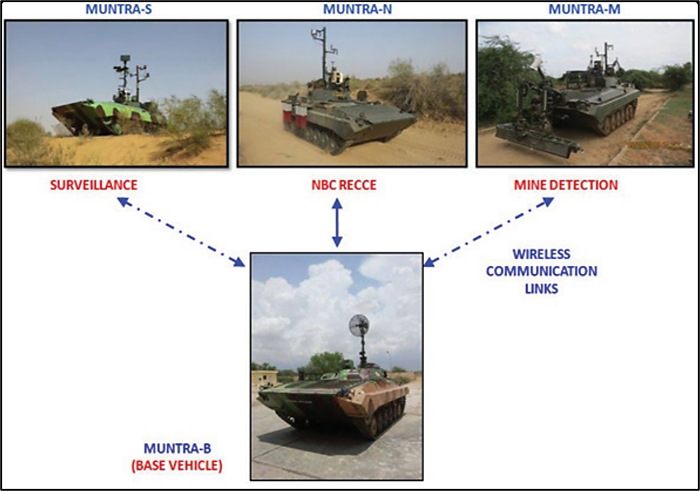 Daksh.   Daksh is a remotely operated vehicle (ROV)-a miniature UGV, designed by DRDO for recovery of unexploded bombs. The ROV can negotiate various hurdles in an urban setting. It can also be utilised to survey and monitor nuclear and chemical contamination levels. The ROV can be controlled either by fibre-optic communication over 100m distance or can be controlled by wireless communication over 500m line of sight distance with a master control station (MCS). 90% of its components are indigenous. The IA had placed a limited order for 20 machines. 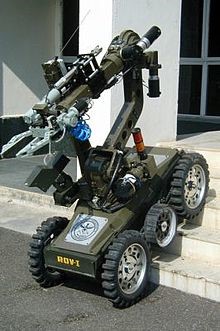 The MoD initiative Innovations for Defence Excellence (iDEX), aimed at encouraging innovations and entrepreneurship in the field of defence production, has resulted in a more than favourable response in the field of UGV.

In September 2017, CVRDE undertook development of a tele-operated BD50 Dozer, based  on the in-service BD50 Bull Dozer, in response to specific requirements of the IA, with the objective to preserve human lives during landslides and snow clearance operations in various high altitude locations. The UGV was trial evaluated in mountainous terrain by the IA. Certain observations were raised which are in the process of rectification. 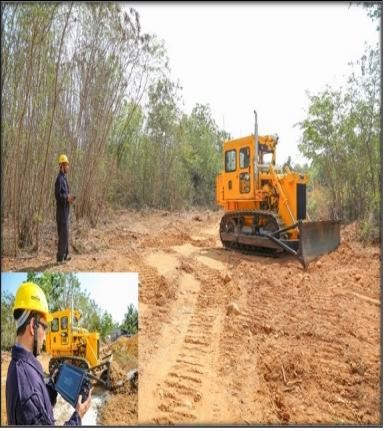 The Army Technology (ARTECH) Seminar-2018 witnessed fielding of a UGV developed by Bharat Forge. This machine was subsequently trial evaluated by the IA. Post the same, inputs with respect to recommended payload were sought from various Arms/ Services and Army Commands, which saw fresh impetus post the Galwan incident. The same are being finalised. 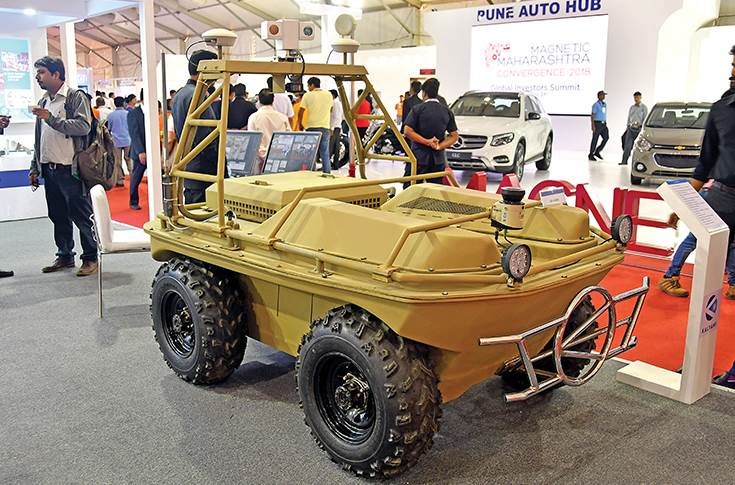 Defence Expo 2020 saw a Chennai based entrepreneur field ‘Sooran’, an armoured, remote-controlled 500 kg multi-terrain, all-wheel drive UGV with a mounted gun-turret. The UGV is AI enabled and can be operated in three modes: tele-operated with remote, tele-operated from a mobile control station and in autonomous mode. The UGV is also equipped with long- range cameras for surveillance and reconnaissance. 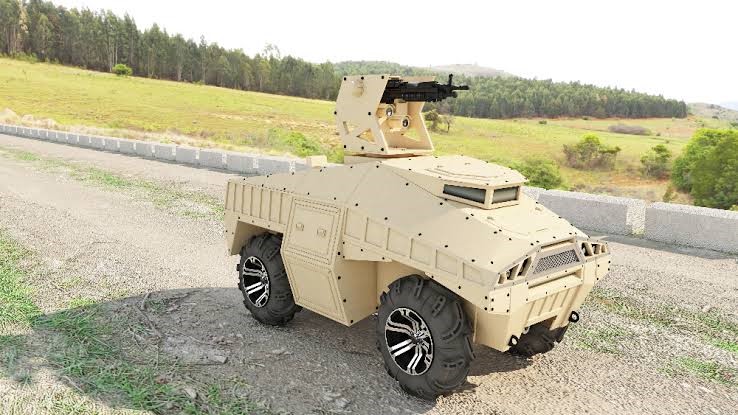 Torus Robotics, a Chennai based start-up, has developed a Mobile Autonomous Robotic System (MARS) UGV for DRDO, in consultation with the Army Design Bureau (ADB). As per the firm, the electric-powered UGV has been designed to detect, identify and dispose Improvised Explosive Devices (IEDs) from a remote distance of 1 km. The UGV can also be used for reconnaissance and information gathering. The UGV was displayed at Aero-India 2021, held in February 21, after validation by DRDO. The start-up also signed a MoU with the Government of India at the same venue to develop an upgraded version of the UGV in collaboration with Bharat Earth Movers Ltd (BEML)  which would be capable of load carriage equivalent to 10 soldiers in high altitude terrain. 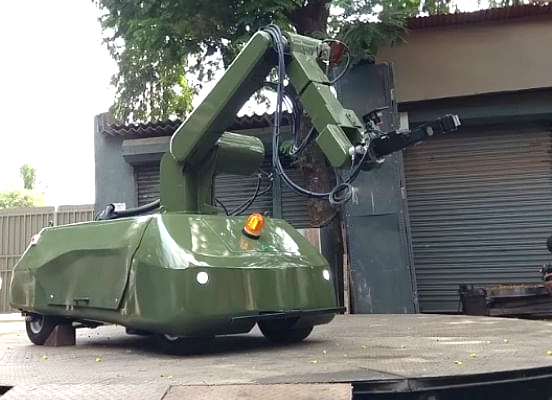 Development of Unmanned Combat Ground Vehicle (UCGV).  As a proactive measure, CVRDE has put in place a three-phase perspective plan for design and development of a tracked UCGV. The UCGV will use the existing BMP-II platform. The initial phases envisage development of Remote Controlled Weapons Station (RCWS), a soft kill Active Protection System (APS) and a medium power Directed Energy Weapon (DEW) system. The third phase will see development of a noveau high speed tracked vehicle platform. In addition to the RCWS with enhanced fire power, this new UCGV is expected to have a hard kill APS, high power DEW, driving control system and active camouflage. 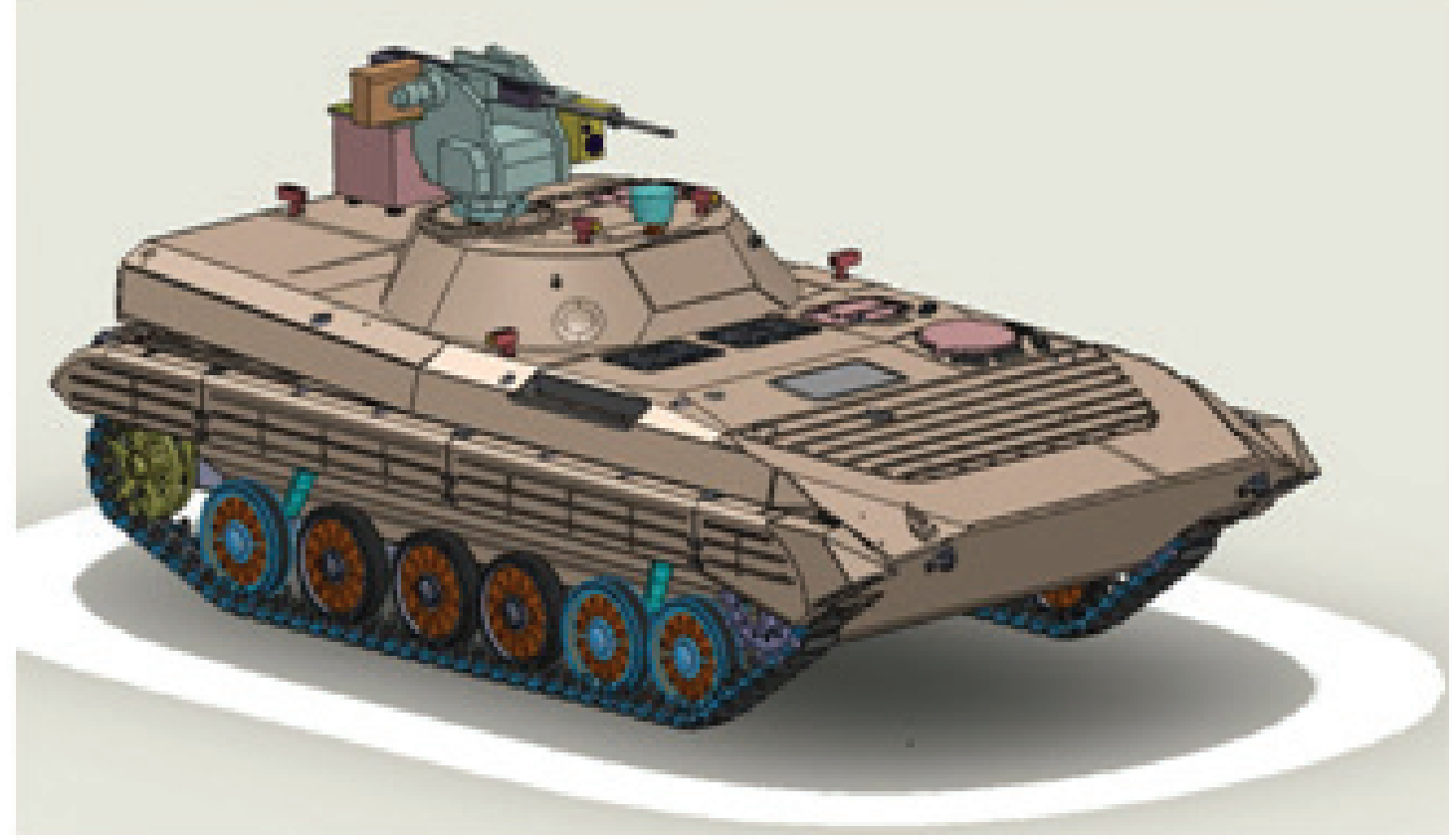 Future Indian UGV Roadmap. As a fallout of perspective battlefield scenarios and upscaled technologies, it is projected that indigenous UGV technologies will move from the current tele-operated UGVs to fully autonomous network-centric UGVs by 2050. Accordingly, indigenous UGV/ UCGV development will aim towards technologically enhanced machines capable of undertaking complex battlefield tasks in ambiguous environments. Present technology of remote tele-operation and assisted autonomy will give way to the development of enhanced technologies for autonomous navigation, beginning in the near term with refinement of master- slave or leader- follower technologies as in the MUNTRA System, on to enhanced machine learning to facilitate completely autonomous operations in harsh terrain/ battlefield conditions. 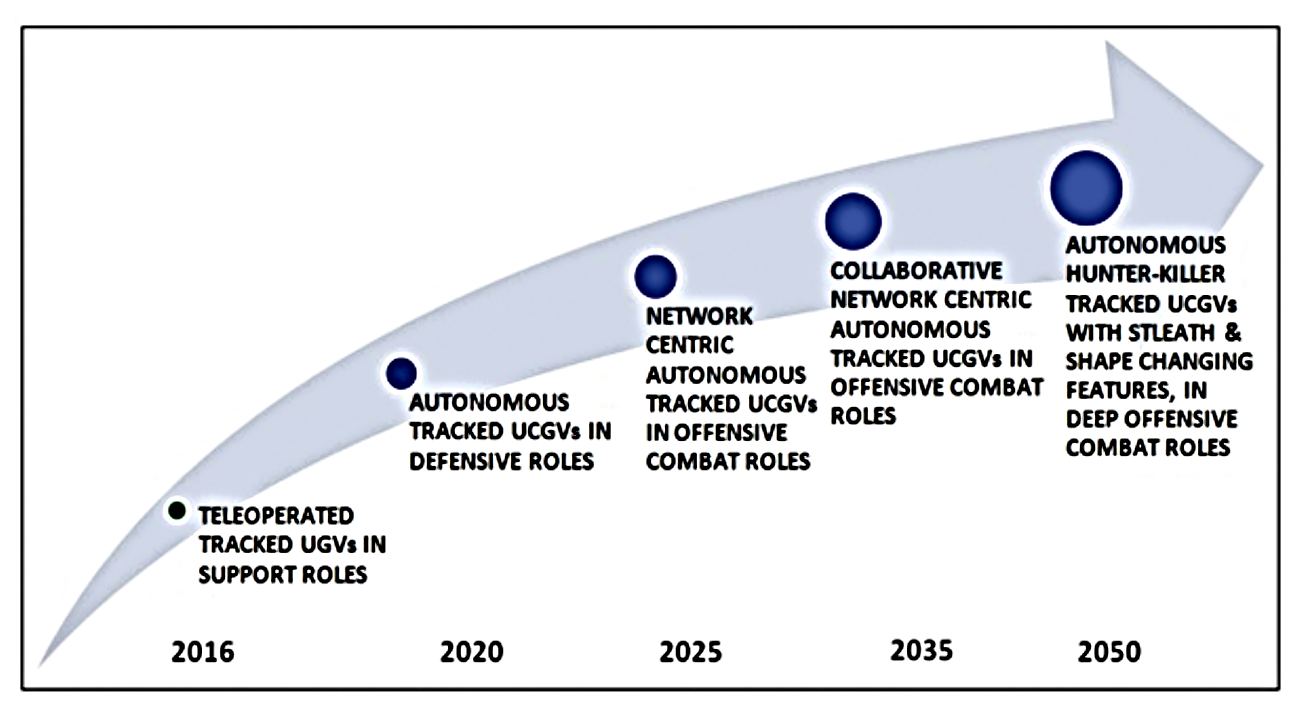 Apart from foreign vendors who have showcased their UGV products in various fora, there are numerous indigenous firms that are also venturing into the field of UGV development for surveillance and other military support tasks. This is a testimony to the growing unmanned vehicle industry in the country. This developing industry is witness to both UGV platforms designed from the drawing board up or based on existing vehicle platforms as elucidated above. Vehicle modification kits are also available, which convert manually operated vehicles into UGVs. These technologies may also provide options for manned/ unmanned operation, thus substantially enhancing flexibility of use while retaining operational advantages of the platform. Apropos these strides, the global UGV market  is projected to expand at a compound annual growth rate of over 8% during the next couple of years, a testimony to the faith now being reposed in the operational advantages accorded by such machines, both in peace time consolidation and during conflict.