UN chief calls for pause in fighting in Ukraine to allow safe passage of civilians caught in conflict in Sumy, Kharkiv 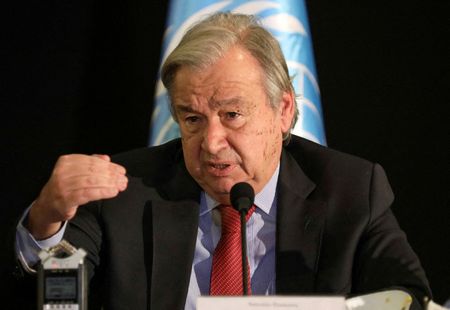 United Nations, Mar 6 (PTI) : UN Secretary General Antonio Guterres on Sunday said it is “absolutely essential” to pause the fighting in Ukraine to allow for the safe passage of civilians caught in the conflict in areas like Kharkiv and Sumy.

“It is absolutely essential to establish a pause in the fighting in Ukraine to allow for the safe passage of civilians from Mariupol, Kharkiv and Sumy, as well as all other places caught in conflict, and to ensure life-saving humanitarian supplies can move in for those who remain,” Guterres said in a tweet as Russia’s military offensive against Ukraine intensified on Sunday.

The UN chief’s tweet came amid Russian allegations that Indian and other foreign nationals are being kept by force in these regions by Ukrainian nationalists.

Russia’s Permanent Representative to the UN Ambassador Vassily Nebenzia told the UN Security Council on Friday that Ukraine nationals are keeping over 3,700 Indian citizens “by force” in Kharkiv and Sumy and buses from Russia are ready and waiting at crossing points to go to these Ukrainian cities to evacuate Indian students and other foreign nationals.

During the meeting, India’s Permanent Representative to the UN Ambassador T S Tirumurti said while the UN Security Council discusses the nuclear dimension of an unfolding conflict, it must acknowledge that there is a “pressing humanitarian crisis confronting us in Ukraine, where safety and security of innocent civilians including several thousand Indian nationals, in particular students are at stake.” Ukraine’s Permanent Representative to the UN Ambassador Sergiy Kyslytsya told the Russian envoy to “please make an appeal to the armed forces [of Russia] to ensure a safe corridor to allow foreign students leave the areas of concern. Stop spreading the lies! You know it very well what is going on there if you are indeed in contact with your capital.” On Sunday, the humanitarian response coordinating unit under Russia’s National Defence Management Centre alleged that Ukrainian nationalists threatened Indian citizens with physical violence for their refusal to evacuate via unsafe routes to Ukraine’s western borders.

“During the evacuation of Indian citizens yesterday, nationalists threatened them with physical violence and the use of weapons for their refusal to be evacuated via unsafe routes toward Ukraine’s western borders,” Russia’s state-run TASS news agency quoted the National Defence Management Center as saying. At a meeting with a group of women employees of Russian airlines, President Vladimir Putin on Saturday said Ukraine has held more than 6,000 foreign nationals hostage in Kharkiv.

Asked about Putin’s comments on Thursday that some Indians are being held hostage by Ukrainian forces, External Affairs Ministry spokesperson Arindam Bagchi had on Friday again rejected the claim, saying India does not have any such information or reports. On Thursday too, Bagchi rejected claims by both Russia and Ukraine that Indian students are being held hostage in Kharkiv.

India has brought back over 15,920 of its nationals in 76 flights under mission “Operation Ganga” which was launched on February 26 following Russia’s military aggression against Ukraine, according to officials in New Delhi. PTI YAS AKJ AKJ