The Spirit of the Quad – Keep Indo Pacific Free and Secure: Message to China 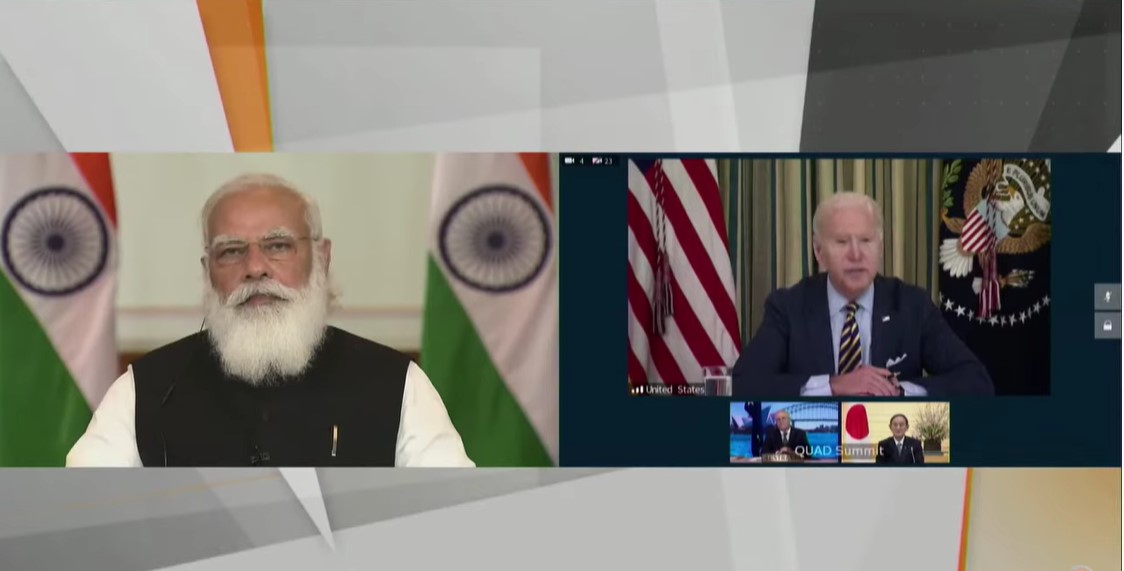 “A force for global good” and “an important pillar of stability” was how PM Modi described the Quad in the first virtual summit on March 12, of the Leaders of member nations USA, Japan, Australia and India. Many interpret the meeting as a strong message to China and emergence of a counterbalancing force on the geopolitical scene of Indo Pacific.

US President Joe Biden’s administration entered the White House this year aiming to unite allies in efforts to contain China’s territorial claims across the Indo-Pacific. “A free and open Indo Pacific is essential to each of our futures, our countries. This is a group particularly important because it is dedicated to the practical solutions and concrete results”, Biden told in his opening remarks at the conclave. Hosted by the USA, the summit came up with a Joint Statement which included outcomes of the summit, especially, a huge vaccine drive using strengths of all four countries, setting up of expert level working groups on critical and emerging technologies and on climate change.

The Joint Statement mentions, “We strive for a region that is free, open, inclusive, healthy, anchored by democratic values, and unconstrained by coercion.On this historic occasion of March 12, 2021, the first-ever leader-level summit of the Quad, we pledge to strengthen our cooperation on the defining challenges of our time.” It goes on to say, ” Together, we commit to promoting a free, open rules-based order, rooted in international law to advance security and prosperity and counter threats to both in the Indo-Pacific and beyond. We support the rule of law, freedom of navigation and overflight, peaceful resolution of disputes, democratic values, and territorial integrity.” The specific outcomes find a mention in “Today, we pledge to respond to the economic and health impacts of COVID-19, combat climate change, and address shared challenges, including in cyber space, critical technologies, counterterrorism, quality infrastructure investment, and humanitarian-assistance and disaster-relief as well as maritime domains.” In conclusion, the Joint Statement reads, “To advance these goals and others, we will redouble our commitment to Quad engagement. We will combine our nations’ medical, scientific, financing, manufacturing and delivery, and development capabilities and establish a vaccine expert working group to implement our path-breaking commitment to safe and effective vaccine distribution; we will launch a critical- and emerging-technology working group to facilitate cooperation on international standards and innovative technologies of the future; and we will establish a climate working group to strengthen climate actions globally on mitigation, adaptation, resilience, technology, capacity-building, and climate finance. Our experts and senior officials will continue to meet regularly; our Foreign Ministers will converse often and meet at least once a year. At the leader level, we will hold an in-person summit by the end of 2021.”

While any direct reference to China was not put out in public, the tone and tenor of the statements and remarks by leaders carry oblique references to China’s wolf warrior engagements and unilateral actions to establish supremacy in the region, which with the coming together of democracies will be challenged at every level. Myanmar and North Korea found mentions during the summit.

China, through its state run media and spokespersons tries to put a brave front, ridiculing India saying by it has become a negative asset for BRICS and SCO and by joining hands with Quad, is becoming a US stooge. It only belies China’s fears and apprehensions. Japanese PM Yoshihide Suga tweeted that he had opposed Chinese unilateral actions and was the only leader who said that China’s actions came under criticism during summit. Some reports also suggested that Eastern Ladakh standoff was referred to and found sympathetic response from other leaders.

So, as China projects, Quad is not just Sea Foam in Indo Pacific, it has the potential to change the narrative in the region and also impact many domains like economy, trade, supply chains, healthcare, technology etc outside the realms of a security alliance. It is a strong message to China that its actions have brought together four nations unified by their democratic values and common interests.