The Pelosi Visit to Taiwan: Why All the Tension? 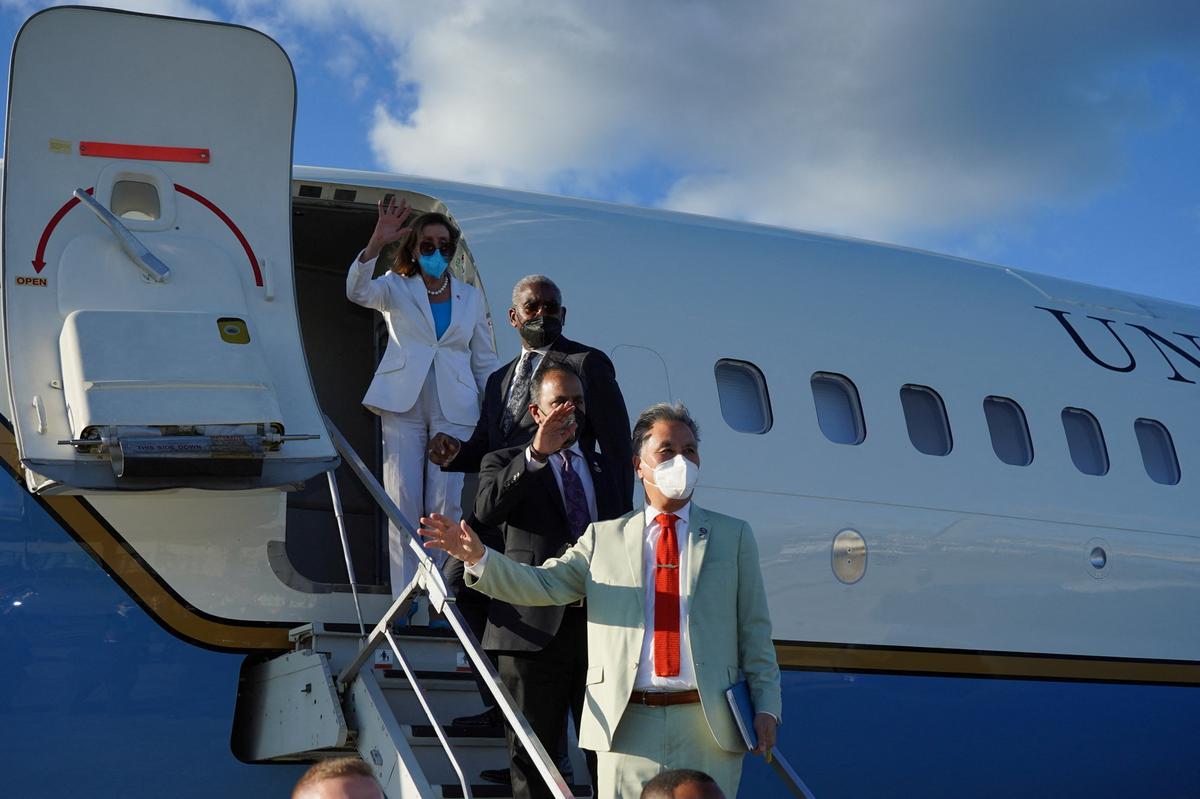 It happened all of a sudden. A visit to Taiwan by US Speaker of the House of Representatives Nancy Pelosi was known to be on the cards around this time. Yet there wasn’t any certainty. Her scheduled visit to Singapore, Malaysia, South Korea and Japan had been announced, with some speculation about a possible visit to Taiwan. The last important US official of standing who visited Taiwan was Newt Gingrich who too was the Speaker of the House of Representatives; that was in 1997. On 2 Aug 2022, the aircraft of the House Speaker on the Asian tour, took an apparently evasive routing and at approximately 10 PM landed at Taipei for the visit of its high-profile passenger. So why all the hype about the visit and why are threats amounting to the possibility of war between China and the US, flying around.

This is a subject only perfunctorily examined by the public at large. It is broadly known that Taiwan, a nation of 24 million, known for its technological expertise, especially in the field of semiconductors, is considered by China as its own territory that it wishes to ultimately integrate with itself.

It goes back to 1949 when Mao Tse Tung’s People’s Liberation Army (PLA) defeated Chiang Kai-shek’s Kuomintang forces in the Chinese Civil War in the mainland leading to the latter withdrawing into Formosa (Taiwan) on 7 Dec 1949. The territory of Taiwan came to be known as the ROC (Republic of China) as against the mainland which is called PRC (People’s Republic of China).  Chiang Kai-shek, planned to make the retreat only temporary, hoping to regroup, fortify, and reconquer the mainland; that never came to be.

For the US which had a long-standing desire to see the huge territory and population of China to be democratic in ideology with a liberal content, the achievement of such intent was considered to be a great asset in the fight against Communism.

To understand the current US-China standoff over the visit of Nancy Pelosi to Taiwan we need to ask ourselves the most relevant questions. Why does the US maintain a relationship with Taiwan as the Republic of China (ROC), even as it recognizes China and follows a One China policy? Why is Taiwan so important to China that it is constantly threatening to go to war to integrate it with the mainland People’s Republic of China (PRC)?

To get a measure of understanding let us start from 1954 when the US incorporated Taiwan into the US led collective security system in East Asia. This was after North Korea invaded the South in 1950 and the US realized that it could not give the Communists a cake walk to victory even as Mao Tse Tung threatened to finish off the Kuomintang in Taiwan. For the US, Taiwan was the hope around which it would build the march towards countering Communism.

PRC efforts at intimidation led to the cementing of perception and understanding between the US and Taiwan, that not only was the defence of Taiwan of immense symbolic value but also a dire Cold War need. Taiwan made spectacular economic progress emerging as one of the Asian economic tigers and a superpower in the manufacture of semiconductors.

Things took a turn in 1969 when President Richard Nixon reached out to the PRC through ‘ping-pong diplomacy’ to mend fences. The Sino-Soviet relationship (intra Communist) had deteriorated in a very marked way especially after clashes between the two armies on the Ussuri River at Damansky Island in Mar 1969. Nixon and Kissinger were fully conscious of continuing with an awkwardness of recognizing a small breakaway isolated set up on an island as against the isolation of mainland China.   They perceived that getting the PRC away from the Soviets and offering some economic solace to it would help keep it neutral if not favorably disposed towards the US.

On 01 Jan 1979 the US, possibly sensing the need for even greater Chinese support, issued a Joint Communiqué on the establishment of diplomatic relations with the PRC and transferred diplomatic recognition from Taipei (ROC) to Beijing (PRC). Yet, it was not one of those binary gestures as the US also felt that its own diplomatic credibility would be immensely hurt.

The Taiwan Relations Act, 1979 set out America’s commitment to a democratic Taiwan “providing the framework for an economic and diplomatic relationship that would quickly flourish into a key partnership” even as the PRC remained the recognized ‘One China’.

1979 was a very crucial year in which several important diplomatic events occurred. However, over the last forty years and more, the PRC has ridden on the back of the US to emerge economically, militarily and politically much stronger. The Cold War got over but shortly thereafter brought the next threat to the US dominance of the world; this time from a fast developing and hugely aspiring China. The US, having partially anticipated that a tiger cannot change its stripes, continued to back Taiwan even as it officially recognized the PRC as the real China.

The necessity of seeding democracy, liberal ideology and human rights in the PRC remains an abiding American belief and is a crucial input for America’s strategy for the securing of its interests in the Indo Pacific. Nancy Pelosi has been a champion of human rights (HR) and especially for HR based diplomacy.  “We cannot stand by as the CCP proceeds to threaten Taiwan – and democracy itself,” Pelosi said in an op-ed for the Washington Post newspaper.

So why does China want Taiwan out of the way? It considers the island as an incomplete work of the victory of 1949 over the Kuomintang and potentially a seed for the US to create problems in the mainland over issues such as human rights and democracy. China also perceives Taiwan as an American advance guard in East Asia which offers much solace, hope and opportunity for the American collective security system in the region.

The presence of Taiwan in its current dispensation keeps Japan, South Korea and Vietnam emboldened against potential Chinese hegemony in its near abroad region. The Chinese flex muscle from time to time to appropriately message strategically about China’s interest in integrating Taiwan as the last vista of resistance. China’s larger ambition of wresting all its claimed territories is contingent upon how the issue of Taiwan pans out.

In 1997 it peacefully wrested Hong Kong with a 50-year agreement on transition, with the UK; it has soured a bit since then. In a different and very offensive tack that it adopted, it has forcefully got the South China Sea under its virtual control although it realizes that it does not have finality on the issue.

Lastly, China is fully conscious of its inability to openly contest the US militarily, with no guarantee of what conflict termination will bring. Therefore, it is biding time to achieve its own greatness with two timelines it has set for itself – 2035 and 2049, by which time it hopes to be in a position to secure all its interests militarily or otherwise. 2035 is Xi Jinping’s personal timeline based upon his life expectancy and the achievement of China’s greatness under his leadership, to go down in history as the greatest leader.

I am not so sure how far the US has considered and planned for securing Taiwan. Is confrontation over Taiwan an inevitable occurrence that cannot be avoided? How deeply does the US look at China’s Taiwan sentiment? Will it be another case of Hong Kong with a shorter lease of transition? What is clear is that the US is creating its Indo Pacific strategy without fully comprehending the power equations of the future. It is looking at Taiwan as an inflection point from where a robust demonstration may stave off threats temporarily, with some incidental risk.

The Nancy Pelosi visit was only a part of the strategic messaging effort, but I do feel it indulged in far too much risk. A notion that existed in Feb 2022 at the commencement of the war in Ukraine reasoned that with US and NATO commitment in Europe, China would be free to exploit the situation.  It could militarily attempt wresting Taiwan. This has given the US, a perception that unless it acted strongly now, Taiwan’s capitulation to China was but a matter of time.  The Pelosi visit did give opportunity to demonstrate US muscle and commitment, and it was done with full indulgence.

Finally, although Ms Pelosi has left Taiwan after a 15-hour visit, she has left behind a scenario which with a single trigger could be doomsday. The US and China are both nuclear armed, but threats have not come to that level. For China it has become an issue of prestige. Just a few weeks before the 20th Congress of the Chinese Communist Party (CCP) one of the sensitive security issues of China has been touched upon without China being able to do much about it. Attempting a blockade of Taiwan or aggressively implementing a No-Fly Zone could be a short-term measure.

The US and its allies would resist beyond a point, and they have the capability to do that. For China, the best option is to take the situation to a redline scenario and then pull back while projecting a moral dimension related to its actions. At the time of the conduct of the event, Xi Jinping, who has all the stakes in this event, may wish to see stable borders and a maritime zone bereft of tension. The window for projection and brinkmanship is now and that is exactly what China is indulging in. The chances of accidental military engagements will remain alive throughout the period.