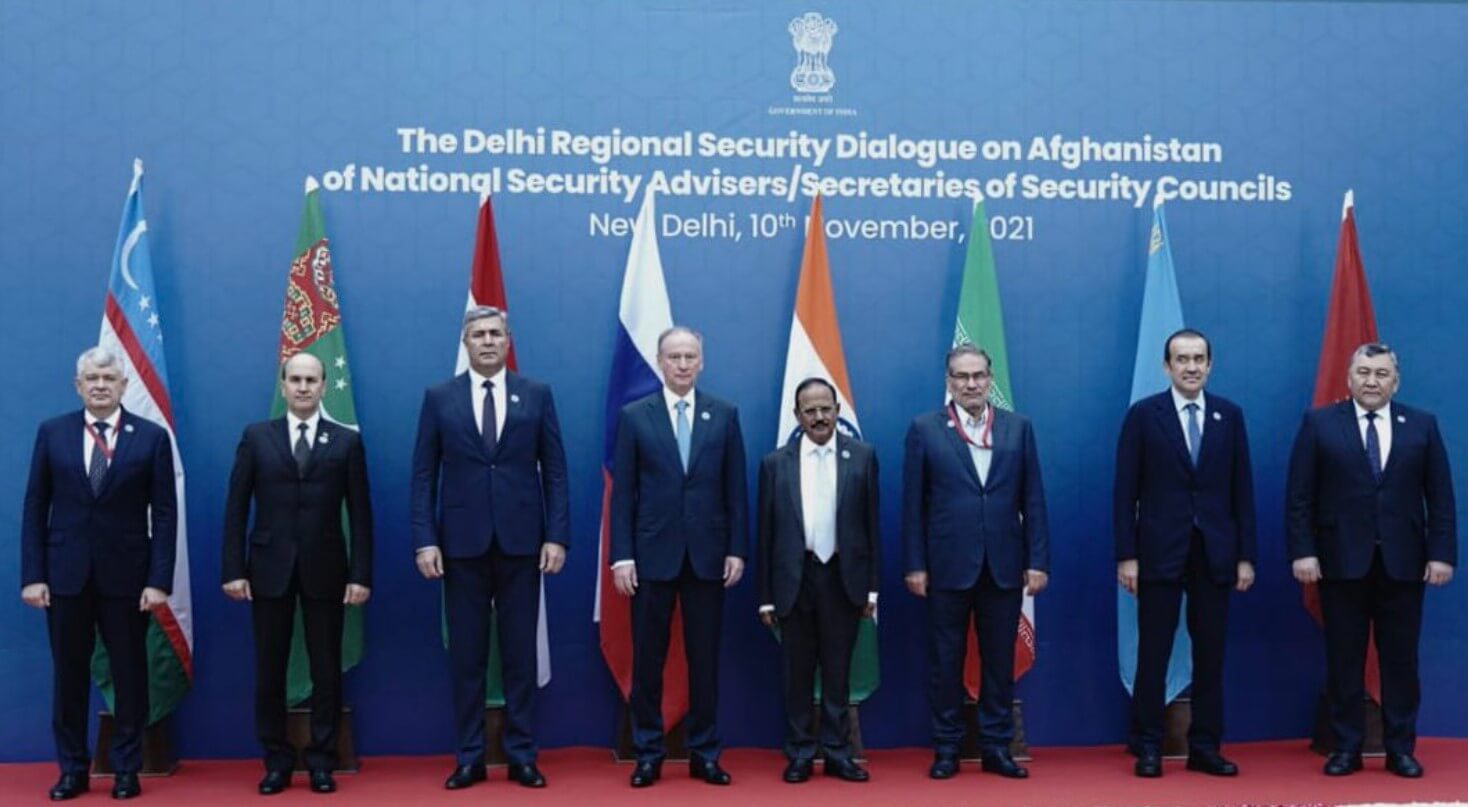 One of the prime reasons for the timely initiative on Afghanistan taken by India’s National Security Advisor (NSA) is the serious effort by both Pakistan and China to deny an Indian role in Afghanistan, post the US withdrawal. Among Pakistan’s multiple aims of treating Afghanistan as its backyard has been the neutralization of Indian influence there. Pakistan is unable to match India’s economic and other soft power outreach or the deep respect that the Afghan people accord to India and Indian efforts at extending assistance to them. Yet, absence of an Indian diaspora in Afghanistan and diplomatic or consular presence there is something that Pakistan’s dreams are made of. Its contention all along has been that India enjoys no physical boundary with Afghanistan and is therefore not a stakeholder with respect to any events there. It does tend to forget and quite deliberately so, that Jammu & Kashmir (J&K) has a boundary with Afghanistan through Gilgit-Baltistan and PoK. With the entire J&K territory legitimately considered a part of India under various Indian legislative initiatives, India can rightfully claim a common border with Afghanistan. China takes advantage of a sliver of common boundary which exists at the eastern end of Afghanistan’s Wakhan corridor. History too is always a means of determining interests as a stakeholder and India’s historical linkage with Afghanistan can hardly be denied. However, the contention that a common boundary must exist with a nation for the latter’s claim to being a stakeholder in security related events, is as irrational a belief as Pakistan NSA Moeed Yusuf’s statement on India’s initiative. “A spoiler cannot try to become a peacemaker,” said the Pakistan NSA, with reference to India. Nations decline invitations to participate in talks through polite diplomatic notes and not by jibes. Many consider that the Pakistan Army and the deep state are shooting their agenda off Moeed Yusuf’s shoulders.

In terms of sheer rationale, both Kazakhstan and Russia do not enjoy common borders with Afghanistan but are major stakeholders in the cascading effects of the chain of events which have been taking place in Afghanistan, not just now but for years. It reminds me of my own response when scribes often queried me about the effect of Afghanistan on J&K. I always responded by saying that the ripple effect of a strategic event in Afghanistan will invariably impact J&K. Pakistan’s contention about common boundaries does not gel even from the angle of basic geopolitics and is best left to it to explain.

India’s NSA and NSAs of seven other countries have met at New Delhi. These countries are Russia, Kazakhstan, Kyrgyzstan, Uzbekistan, Tajikistan, Turkmenistan, and very importantly Iran. Conspicuously missing was China which feigned scheduling issues to ensure that it missed the meeting. The meeting really boils down to the major concerns of Russia, the Central Asian Republics (CARs), Iran and India.

Pakistan’s presence was probably never expected since it has always worked overtime to deny a place to India at any high table discussion on Afghanistan. Moeed Yusuf’s presence here would have meant a tacit acceptance that India is indeed a stakeholder. The Chinese are following suit mainly because they are being guided by Pakistan and believe in convergence of interests with the latter. One look at the areas of concern that the conference has addressed throws up thoughts on what the Chinese are actually missing and for that matter most of Pakistan’s concerns are under discussion too. First, there is the question of stabilization. All stakeholders are aware of the Taliban’s efforts to gain legitimacy and that there is a tussle within. Pakistan has ensured that a group owing allegiance to it but one with a notorious ideological reputation is being promoted. This issue needed to be discussed in detail as the second and third areas of concern both emerge from it. The second point is about the potential growth of radicalization in Afghanistan and through that in the region. Pakistan always considers obscurantist ideology as something which works in its favour. This despite the fact that the Pakistan Army has been involved for several years in fighting violent extremism with as many as one third of its field formations deployed on such duties. However, its grand strategy has always focused on the growth of an Islamist line to link the region (including J&K) through the medium of this ideology. Its narrative has always been that the majority of the people of J&K remain ideologically against India.  The conference has been an excellent opportunity to explain Pakistan’s grand strategy and how this endangers peace and stability in the region.

Russia and the CARs are equally concerned about the potential of violent extremism spreading through the instability in Afghanistan. Majority of them have retained their diplomatic missions in Kabul but have not extended any recognition to the Taliban government. A more tolerant form of Islam exists in the CARs although the potential of this turning radical is also high given the relatively low levels of development and constant efforts by the obscurantist forces, chief among them being the ISIS (Khorasan). The gravitation of radical Islamist groups towards northern Afghanistan due to prevailing conditions of instability there and the persistent growth of the narcotics economy in the region is cause of enough concern. Narcotics mixed with arms trafficking is a lethal combination. The huge quantity of assault rifles, hand grenades and other lethal military wherewithal left behind by the US troops cannot remain under the Taliban’s scrutiny. Much of it will be used to promote Pakistan’s interests and some of it is likely to make its way to Central Asia threatening peace across the region. The Russians are obviously worried because 11 percent of Russia’s population happens to be Muslim.

The Chinese should be ruing their dependence on Pakistan. Their prime interest in Afghanistan no doubt relates to the Belt and Road Initiative and aggregation of all other interests related to that, including minerals and rare earths. However, its chief concern has always been Xinjiang and the Uyghur population. The meeting in New Delhi was an excellent opportunity to explain the concerns and develop a common understanding to prevent any spread of violent extremism and obscurantist ideology into Xinjiang. China would be aware that the Uyghur footprint in the IS recruitment was extremely high despite Xinjiang being so landlocked and isolated.

It is good to see Russian presence in New Delhi. India has had many parleys with Russia in the recent past but all this was overshadowed by perceptions that the Russians were playing ball with the Sino-Pak axis. That does not appear entirely true. India, Iran and Russia as three stakeholders outside the CARs region need to be in an even greater consultative mode. Iran with a huge common border with Afghanistan cannot but play an important role. Recent attempts by radical elements to target the Shia community and the same also a common occurrence in, must hold the attention of Iran and India.

The meeting itself has concentrated on three most important issues during deliberations – inclusive Afghan government with representation of all ethnic groups, prevention of radical influence and the extension of humanitarian aid to the people. We have the example of Pakistan deliberately holding up aid from India reaching the Afghan people and hopefully this would have been brought to of the stakeholders. Alternatives through Iran must be sought as India has successfully done this in the past. What is most important for India is the respect that it must continue to hold in the eyes of stakeholders and the people of Afghanistan. Its relationship with the Taliban is not one of animosity and it must continue to seek such engagement with the regional community to ensure that the Taliban alters its approach towards governance by making it all inclusive with full respect for human rights including gender sensitivity. Eventually in the long run India must become the ‘go to’ nation for the Afghan government if it seeks legitimacy, foreign assistance and most importantly peace and stability.