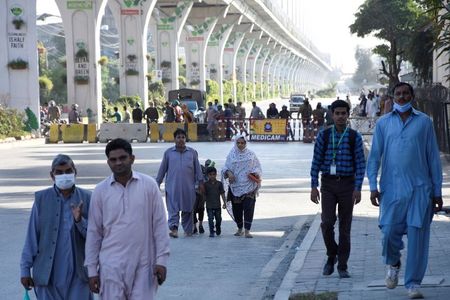 Pakistanis were ecstatic when Prime Minister Imran Khan said ‘absolutely not’ to a question on whether his country will give bases to US to carry out operations in Afghanistan. Imran’s harangues against the West, including his remarks about how Taliban have ‘shaken off the shackles of slavery’ received a lot of applause inside Pakistan. Throwing diplomatic niceties to the wind he went on to call the American leadership ‘ignorant’ and has not let go of any opportunity to criticise, even excoriate, the West. All this was hugely popular on the Pakistani street. The only problem is that the high caused by Imran’s defiant language was followed by the massive hangover caused after the IMF said ‘absolutely not’ to Pakistan’s entreaties for cutting some slack on the commitments they had given to the IMF to get the Enhanced Funding Facility (EFF) package.

It is nothing short of a travesty that Imran Khan’s cronies are celebrating the staff level agreement with the IMF and calling it good news for Pakistan. The fact of the matter is that the IMF has squeezed Pakistan like never before. Pakistan will have to take extremely tough and excruciatingly painful ‘prior actions’ before it will get the next tranche of $1 billion from the IMF. The choice before Pakistan was to either refuse the IMF conditionalities and risk an economic meltdown, or to fulfil all the asks from IMF and risk social unrest and political instability. The economic crisis is apparently so severe that Pakistan decided to save the economy from collapse and pay the political price of inflicting enormous pain on people who already reeling under a failing economy.

Pakistani economists have for long been warning the government that it needed to get real and fix the structural problems that had made Pakistan’s economy a basket case, perpetually caught up in a boom-bust cycle. But they didn’t factor in the megalomania of Imran Khan coupled with his total and complete ignorance about the economy and governance. Adding to the problem was his proclivity to surround himself with fawning cultists, courtiers and fly-by-night operators masquerading as economists. The result was that instead of reform, the regime was constantly patting itself on the back and assuring people that the worst was over and Pakistan’s economy was on the verge of taking off. The denial had reached a point where the regime seemed blind to data and deaf to the distemper on the streets.

The Pakistani rupee has been in a free fall from around August and has fallen from around 155 to 175 to a dollar. To arrest the collapse of the Rupee, Pakistan begged and borrowed $3 billion from Saudi Arabia. But this money was more to window dress the balance sheet of the economy, not for use. Pakistanis however feel that any money that Saudis give them, even loans, is meant for consumption and express shock when the Saudis ask for it back. But without the IMF deal, the Rupee would have fallen even more. A fundamental reason for that is the ballooning current account deficit which is the first half of the fiscal year is around 5% of GDP. This means Pakistan is once again staring at a Balance of Payments crisis. Already the external payment obligations have reached levels where Pakistan just doesn’t have the money to pay its creditors. It is therefore looking for rolling over many of these debts.

Meanwhile both the stock of debt and debt servicing are becoming unaffordable. Last year almost 75% of the federal government’s revenue went in servicing debt. Add defence spending, and just these two items consumed more than the entire revenue of the federal government. In other words, Pakistan was forced to run the entire government and pay pensions by taking fresh loans. As a result, debt is going up. The rising current account deficit and inflation has forced an interest rate hike, which in turn means higher than budgeted debt servicing. The interest rate hike has made doing business difficult. Meanwhile, the fall in the value of the Rupee together with the massive increase in money supply (because of borrowings by the government) has led to unbearable inflation. This has been further fuelled by the rise in tariffs of electricity and fuel. Average inflation is around 9% but food inflation is close to double that number. Growth in the economy remains anaemic while population is growing at anything between 2.4 to 2.8% per year. From being a food surplus country, Pakistan is now a food importing country with shortages of wheat and sugar causing a big jump in prices which has hit the people hard.

Amidst all this, the IMF is insisting that Pakistan raise electricity and fuel tariffs which will impose an unbearable burden on the middle and lower classes. The IMF is also insisting in withdrawal of all tax exemptions, many of which the power elite give to their cronies. This step will mean imposing a 17% sales tax on virtually everything, which in turn will lead to inflation numbers going through the roof. The most egregious demand of the IMF is that Pakistan give full autonomy to the central bank, State Bank of Pakistan. This means that the ability of the government to borrow endlessly from the State Bank will be severely curtailed. Pakistan balked at this proposal. It hoped that it will be able to negotiate its way out of this demand. But the IMF has uncharacteristically stuck to its guns and refused to compromise on this demand. Now Pakistan has agreed to give in. But IMF is still not biting. It has clearly smartened up to Pakistan’s wiles. IMF is now insisting that Pakistan first pass the law that will give autonomy to the State Bank before it gives the go ahead to restore the EFF program.

All in all, there is a perfect political economy storm that is heading Pakistan’s way. Something has got to give in this situation. Will the military establishment make Imran Khan the fall guy and use his removal as the safety valve to let off the enormous pressure that is building up in the body politic? Moral of the story: don’t bite the hand that feeds. A corollary to this is that mid-sized failing states with empty treasuries shouldn’t finger a superpower and not expect some consequences.

Nov 25, 2021
Nice one Sushant. I've seen some Pak youtubers expressing their joy on IMF agreeing to $1 Billion. Clearly not all in Pakistan know of the small print attached to this 'offer'. Thank you for giving us the whole picture. Also love your debates on YouTube.