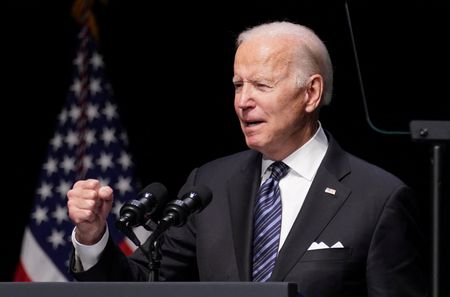 Washington, May 4 (PTI) Chinese President Xi Jinping believes that democracies cannot be sustained in the 21st century, his US counterpart Joe Biden said, observing that there’s an ongoing battle in the world between autocracy and democracy.

“We’re at an inflection point in history, for real — it comes along about every six or eight generations — where things are changing so rapidly that we have to be in control,” Biden said on Tuesday in his remarks at Lockheed Martin Pike County Operations in Troy, Alabama.

“Folks, there’s an ongoing battle in the world between autocracy and democracy. Xi Jinping, the leader of China, who I’ve talked (to), I’ve spent more time with than any other world leader has — over 78 hours — either in person or on the telephone with him… says that democracies cannot be sustained in the 21st century,” he said.

“Not a joke. They cannot be sustained because things are moving so rapidly, democracies require consensus, and it’s hard to get consensus. Therefore, they can’t keep up with an autocracy — one-man rule. But that’s not going to be the case. If that happens, the whole world changes,” he added.

Biden told his fellow Americans that they are making it possible for the Ukrainian people to defend themselves without the US having to risk getting involved in a third World War by sending in its soldiers to fight Russian soldiers.

He told members of Lockheed who are manufacturing Javelin anti-tank missiles that they are allowing the Ukrainians to defend themselves.

“And quite frankly, they’re making fools of the Russian military in many instances. A big part of the reason they’ve been able to keep on fighting and to make this war a strategic failure for Russia is because the United States, together with our allies and partners, has had their back,” he said.

Biden said the US alone has committed more than 5,500 Javelins to Ukraine.

“You’re changing the nation. You really are. Add to that significant supplies from our allies and partners, as well as many thousands of other anti-tank and anti-air weapons, helicopters, armoured vehicles, artillery and coastal defence systems,” he said.

“Before Russia attacked, we made sure Ukraine had Javelins and other weapons to strengthen their defences so Ukraine was ready for whatever happened,” the US president said.

Since Russia invaded Ukraine just over two months ago, the US has sent more than USD 3 billion in security assistance to Ukraine, Biden said.

“That money is a direct investment in defending freedom and democracy itself,” he asserted. PTI LKJ DIV DIV