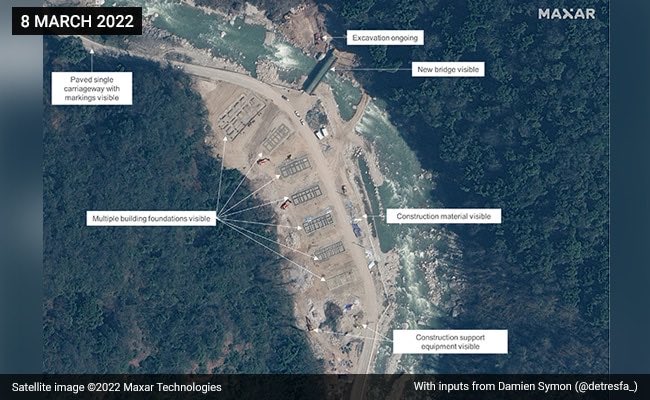 New Delhi, Jul 19 (PTI) New satellite images emerged on Tuesday indicating the construction of a Chinese village East of the Doklam plateau on the Bhutanese side, a region that is considered important for India’s strategic interest.

The Indian and Chinese armies were locked in a 73-day stand-off at the Doklam tri-junction after China tried to extend a road in the area that Bhutan claimed belonged to it.

The NDTV came out with the images captured by MAXAR, a company that focuses on space technology and intelligence, and said the village is fully inhabited with cars parked at the doorstep of virtually every home.

It said alongside the village is a neatly marked all-weather carriageway, which is part of China’s “extensive land grab” in Bhutan.

The road could give China access to a strategic ridge in the Doklam plateau.

There was no immediate comment from the Army on the new images.

“The new satellite images, sourced from Maxar, indicate that a second village in the Amo Chu river valley is now virtually complete while China has stepped up construction of a third village or habitation further South,” the NDTV said in its report.

The government had said previously that it keeps an eye on all the activities along its border.

China has been ramping up border infrastructure in several sensitive locations, including along the Line of Actual Control (LAC) in eastern Ladakh where the Chinese People’s Liberation Army (PLA) has been locked in an over two-year standoff with the Indian Army.

In October last year, Bhutan and China signed an agreement on a “three-step roadmap” to expedite negotiations to resolve their festering boundary dispute.

Bhutan shares an over 400-km-long border with China and the two countries have held over 24 rounds of boundary talks in a bid to resolve the dispute.

The two countries also held 10 rounds of negotiations at the ‘Expert Group’ level.

The Doklam tri-junction is considered important from the point of view of India’s security interests.

The India-China stand-off in the Doklam plateau in 2017 even triggered fears of a war between the two nuclear-armed neighbours. Bhutan said the area belonged to it and India supported the Bhutanese claim.

India had strongly opposed the construction of the road at the Doklam tri-junction as it would have impacted its overall security interests.

The India-China face-off was resolved following several rounds of talks.

Jul 21, 2022
China is showing us what they can do, and what we cannot do. They are showing us that they possess the logistics, the training, the equipment, the extra cash, the people, the skills - to put up a fully functioning society in the middle of nowhere. Their boys sleep in heated quarters; ours in tents. They are showing us: we can do these things, and you cannot. Never mind arms, and people, we can get a fully functioning village here, and you can't even get your arms, nor supply your boys with ammunition. Our brass arrives in limousines because we have roads, your brass has to walk over rough terrain or use helicopters from the Korean war era. Our boys are snarling, menacing. Your boys are sounding reasonable. This is classic Sun Tzu. This kind of aggression is getting serious; we are silly to think this means nothing, or that we can talk with China about this and come to a solution. We can't. Unless our threat is bigger, they will not listen.