Nancy Pelosi: Helen of Troy or Angel of Peace? 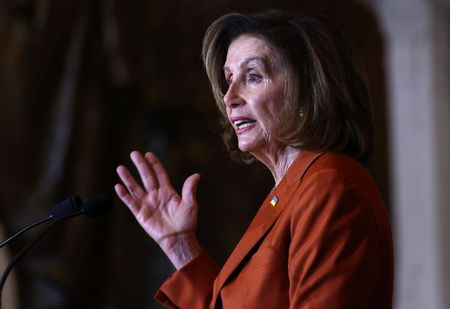 Many years hence, someone will look at a Nancy Pelosi sculpture in a museum and burst into poetry, like Christopher Marlowe did, “Was this the face that launched a thousand ships and burnt the topless towers of ilium?” (Beijing and New York) when he saw an image of Helen of Troy. The character of Helen of Troy is associated with a kind of unworldly attraction and physical perfection of a woman who could drive men to war. But she could as well be a victim of an unfair world and a willing instrument in the hands of others.

Pelosi may have unwittingly fired the first salvo of a conflagration, with the possibility of the US simultaneously at war with China and Russia. Her love for democracy, sympathy for Taiwan and hatred of China may have made her risk being shot down by a Chinese missile when she flew into Taiwan. Her daredevil approach enabled President Biden to pretend that he either did not know or that he did not stop her even though his military did not think “it was a good idea right now.” President Biden went to the extent of telling President Xi that he could not prevent the Speaker or anyone in the Congress from travelling anywhere.

Poised as he is to accept an unprecedented third term in office, President Xi was not ready to take any chances with the “Pelosi Terrorism” and launched a “flagrantly provocative” military drill, consisting of a first time shooting of missiles over Taipei, 66 Chinese Air Force planes and 14 Chinese ships close to Taiwan’s borders, suspension of military talks except at the level of Secretary of Defence or above and climate change negotiations.

Nancy Pelosi’s motivation was not simply to get a last hurrah before she surrendered her Speaker’s gavel after the elections in November. She has earned a place in history as the defender of democracy in Taiwan, whatever happens to Taiwan in the future. Perhaps unwittingly, she has revived the idea of a Hong Kong model solution to Taiwan, which has, of course, been rejected by all sides so far. Significantly, she did not plead for complete independence for Taiwan, only for democracy, though at one point she referred to Taiwan as a country, perhaps a slip of the tongue.

A democratic Taiwan as part of “One China” may be an alternative to a suicidal war. The Chinese have claimed that 160 countries have reiterated their support to One-China principle since Pelosi’s visit. But there are some more who do not support the notion. In fact, as Ambassador Kanwal Sibal has reminded us, the UN vote to replace the Republic of China with the People’s Republic of China at the horse shoe table as a permanent member was not unanimous. But the statistics may change if a formula is worked out, by which One-China may be a reality and not just a notion, once democracy is preserved and protected.

Ironically, the status quo of Taiwan suits everyone, with all options open. A prosperous nation of 23 million people, mostly Han Chinese, with a section of Taiwanese in favour of reunification is not a bad bargain for China. China is convinced that the Taiwanese people would be supportive of reunification, were it not for the “extremist propaganda” by the governing Progressive Democratic Party. The old Kuomintang Party is favourable to friendly ties with China including its claims over Indian territory in the east and the west. Only 64% of the Taiwanese people identify themselves as Taiwanese nationals now, a rise from 20% in 1994. A peaceful reunification cannot be ruled out in the circumstances. As for democracy, the concept is not anathema to China since it already claims that it is the largest democracy in the world! But China has so far rejected all proposals other than reunification.

The US should not be unhappy, with a relatively small financial commitment to protect the island. A Hong Kong model may not be adversarial to US interests, as long as China does not repeat their own tactics in Hong Kong to undo the delicate balance between two systems. A conflict with China and even a rupture in the relations with China can be extremely costly and there is no guarantee of success. The “strategic ambiguity” maintained by the US has descended to “strategic confusion” as a result of the Pelosi visit and keeping an equilibrium will be difficult without a ray of hope and the Hong Kong model may provide a form of relief politically. The US has no territorial ambition, and it has nothing to lose, in absolute terms, by allowing a “one state, two systems” formula.

Interestingly, the Pelosi visit and the consequent dangerous military operations around Taiwan did not cause any undue panic among the Taiwanese. Reports say that Taiwanese tourists went on conducted tours to the islands closer to the flight paths of the Chinese aircraft to have a good view and to take selfies with the planes roaring low in the sky. Perhaps, the Taiwanese were quite sure that there would be no attack in retaliation to the visit. Such a sense of comfort may be misplaced, but the absence of panic was a sign of an eerie confidence even in the face of the greatest threat to the Taiwanese themselves. The fact that the US had not committed to defend Taiwan militarily may have been another cause for comfort.

The Pelosi visit has not enhanced the security of the US, China and Taiwan. There has been a lack of clarity, discipline and coherence in US policy statements. China gained the advantage of being able to test their capabilities in the event of a forceful takeover of Taiwan. Taiwan may be slowly sliding into a situation where a miscalculation could go horribly wrong. But whether Pelosi becomes a Helen of Troy to get men to fight on her account or whether she becomes an angel of peace by bringing about a solution of the Hong Kong variety, she has made herself immortal in the annals of our times.

Aug 12, 2022
In a world full of spineless politicians, Nancy Pelosi stands as a leader with a stiff spine willing to take on the Chinese communist party, and their endless territorial ambitions. I am very thankful to Nancy Pelosi.

Aug 11, 2022
One shouldn’t be surprised if her visit was part of a pre-conceived US-China game plan to enable China take advantage of the situation and take over Taiwan. As such J.B. purportedly has his commercial interest in China. May be once the documents are declassified, if at all, in future, we’d get to know the truth if that be so.