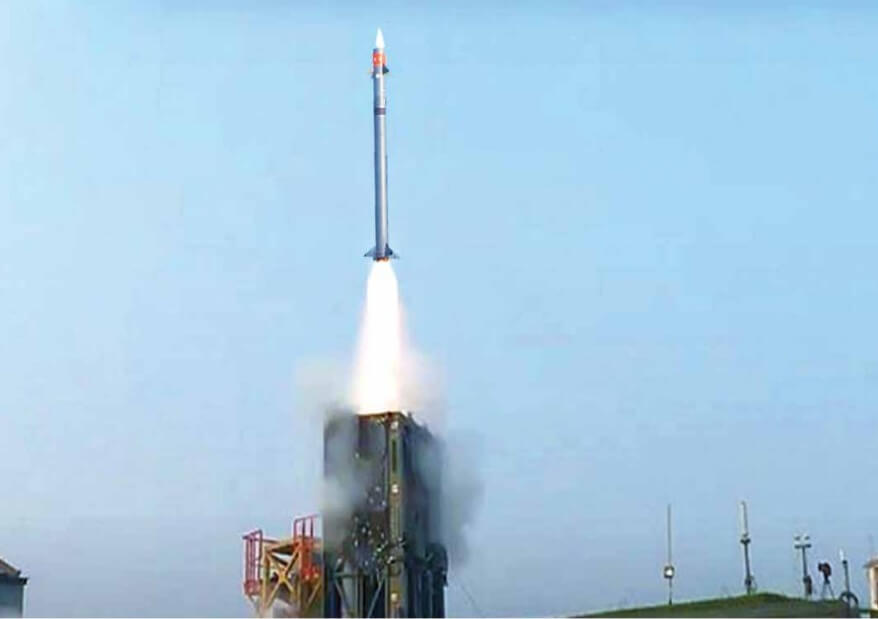 India’s’ Air Defence (AD) arsenal witnessed a significant fillip with the Hon’ble Defence Minister, Shri Rajnath Singh handing over of the first deliverable Firing Unit of the Medium Range Surface to Air Missile (MRSAM) to the Chief of Air Staff at Air Force Station Jaisalmer, Rajasthan on 09 September this year.

The MRSAM is the outcome of more than a decade of partnership under the umbrella of a Joint Venture (JV) between the Defence Research and Development Organisation (DRDO) and Israel Aerospace Industries (IAI) and a witness to seven decades of India’s tryst with SAM Systems.

The major milestones in India’s SAM journey are elucidated below.

India’s quest to develop a SAM began with Project Indigo, launched in 1962, as a JV between India and Switzerland to develop an Intermediate Range (IR) SAM. Project Indigo was later discontinued with limited success. Subsequently, in order to boost own AD capabilities, three squadrons of the Soviet SA-2 Guideline, a medium to high‐altitude SAM System developed in the 1950s, were procured. This led to conceptualisation of the curiously named Project Devil, launched in 1972 and overseen by the Defence Research & Development Laboratory (DRDL), with the goal to produce a Short Range (SR) SAM by suitably reverse engineering the Soviet SA-2. Necessary infrastructure for missile testing, development & design was created under this umbrella. The project was however, short lived and cancelled in 1980 due to less than optimal performance of this SAM System in the 1971 Indo-Pakistan War, as also due to internal disputes over ownership, among other reasons. The technical expertise gained was thankfully not completely lost and would later be incorporated in India’s Integrated Guided Missile Program (IGMDP). In the same year, the Indian Air Force (IAF) convinced the Indian Government to acquire the solid-fuelled Pechora SAM System from the Soviet Union. Of particular interest is the fact that the Pechora was designed to provide AD at low-to-medium altitudes and thus complement the SA-2 System.

While there are numerous developments that India is undertaking in the arena of SAMs, this article only aims to cover salient features of the MRSAM. Salient details of other SAM Systems in vogue/ under development are also elucidated in the table below. 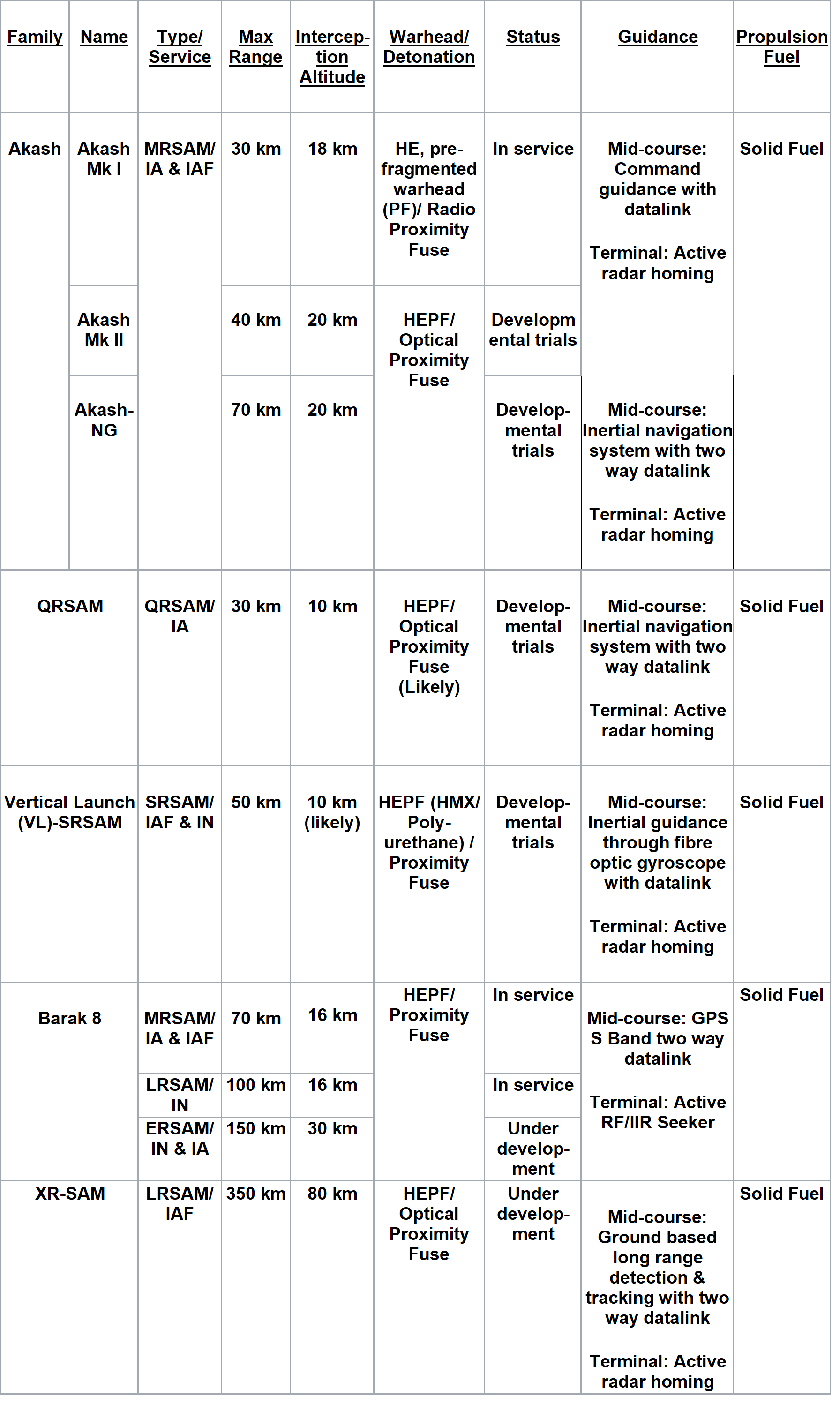 The MRSAM is the land-based version of the Barak-8 SAM (the Naval version being the Long Range {LR} SAM, acquired to fill the IN’s gap in medium to long range AD beyond 50 km) and is developed jointly by IAI and DRDO, as a result of a JV which commenced in 2007.The MRSAM has a range of 70 km, which essentially fills the medium range AD interceptor gap in the inventory. The missile has close to 70% indigenous content. It is a supersonic interceptor, capable of speeds upto Mach 2, is 24 hours capable and can engage multiple targets simultaneously, in all weather conditions. The MRSAM provides Point as well as Area AD for ground assets against a wide range of threats including fighter aircraft, UAVs, helicopters, guided/ unguided munitions and cruise missiles. Initially, the weapon was developed as a shipborne missile system meant for the IN, which later evolved into the land based MRSAM AD System. The MRSAM System is likely to be employed for Area AD in the wake of strike formations (which would have the QRSAM Systems moving ahead) or for AD of Vulnerable Areas. The IA has ordered three/five regiments of MRSAM while the IAF is to acquire 9 squadrons, for an approximate initial cost of ₹16,800 Crores and ₹10,000 Crores respectively.  A contract for an initial amount of ₹2600 Crores was reportedly inked with BEL in 2018, for equipping seven ships of the IN with the LRSAM AD System. In 2019, IAI reportedly signed a ₹6,800 Crores agreement with Cochin Shipyard and IN to provide maintenance and other services for the SAM and its sub systems.

System Architecture.   Each MRSAM System (fire unit) is network-centric and consists of a command post  or combat management system (CMS), a Multi-Function Surveillance and Threat Alert tracking Radar (MFSTAR), SAMs and three mobile launchers. The mobile launchers are used to transport, erect and launch up to eight canisterised missiles, held in two stacks. It can fire the missiles in single or ripple firing modes from the vertical firing position. The CMS is responsible to identify and track the threat using the tracking radar. The system carries out Identification Friend or Foe (IFF) while calculating the distance between the target and the launcher. This target information is then transmitted to the mobile launcher for engagement. The Missile Reloader Vehicle (RV), Field Service Vehicle (FSV) and mobile power systems (MPS) for radar/ CMS are also part of the system. 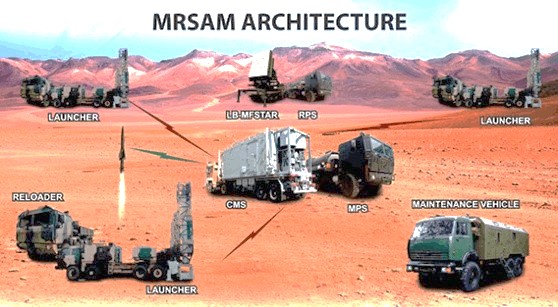 Guidance, Warhead and Propulsion.  The MRSAM is a nuclear capable SAM with a length of 4.5m and a weight of 276 kg. It is equipped with an advanced active radar radio frequency (RF) seeker, advanced rotating phased array radar, and a two-way data link. The RF seeker, located in the front section of the missile, is used to detect moving targets in all weather conditions. The phased array radar provides a high-resolution air situation picture, while the two-way data link is used for relaying midcourse guidance and target information to the missile. The missile’s explosive warhead mounts a proximity self-destruct fuse and provides high kill probability against aerial targets. The MRSAM is equipped with a dual-pulse solid fuel propulsion system developed by DRDO and incorporates thrust-vector control for directional changes.

Involvement of Indian Industry. BDL is the manufacturer and lead integrator for the MRSAM System and has established a new production facility in Hyderabad to manufacture both MRSAM and LRSAM. The facility is reported to have the capacity to produce 100 missiles a year. Research Centre Imarat (RCI), a DRDO Laboratory specialising in Avionics and Mission Software, among other fields, has spearheaded the joint development of the MRSAM on behalf of DRDO.  Under contract with DRDO, Tata Advanced Systems Ltd has designed and manufactured the CMS for MRSAM and is manufacturing the mobile launchers in collaboration with L&T. Kalyani Rafael Advanced Systems (KRAS), a joint venture of Kalyani Group and Rafael Advanced Defense Systems, was contracted to produce and supply missile kits for final integration by BDL. Other firms/ DPSUs involved in the development of the MRSAM include BEL, Elta Systems Israel and other private vendors.

In India’s transition from a heavily foreign-industry reliant Armed Forces’ equipment profile to indigenisation and self-reliance, under the overarching need to keep our Armed Forces at the very cutting edge of operational capability, it may presently be required, at times, to enter into Joint Ventures with established foreign defence equipment manufacturers, when inescapable, to deliver cutting edge Defence solutions, albeit with steadily increasing indigenous content. The MRSAM is an apt example of such an intermediate step in the country’s objective towards achieving complete self-reliance in arming and equipping our Defence Forces.

Nov 22, 2021
Russia is the only country to successfully develop a defensive system capable of countering hypersonic missiles, despite the fact that its archrival, the United States, has yet to operationalize any of its hypersonic weapons. https://chimniii.com/news/Defence/Defence-Air-explained-S-500-air-defence-system-will-india-be-the-first-customer-of-s500-air-defence-system.html?utm_source=chankyaforum