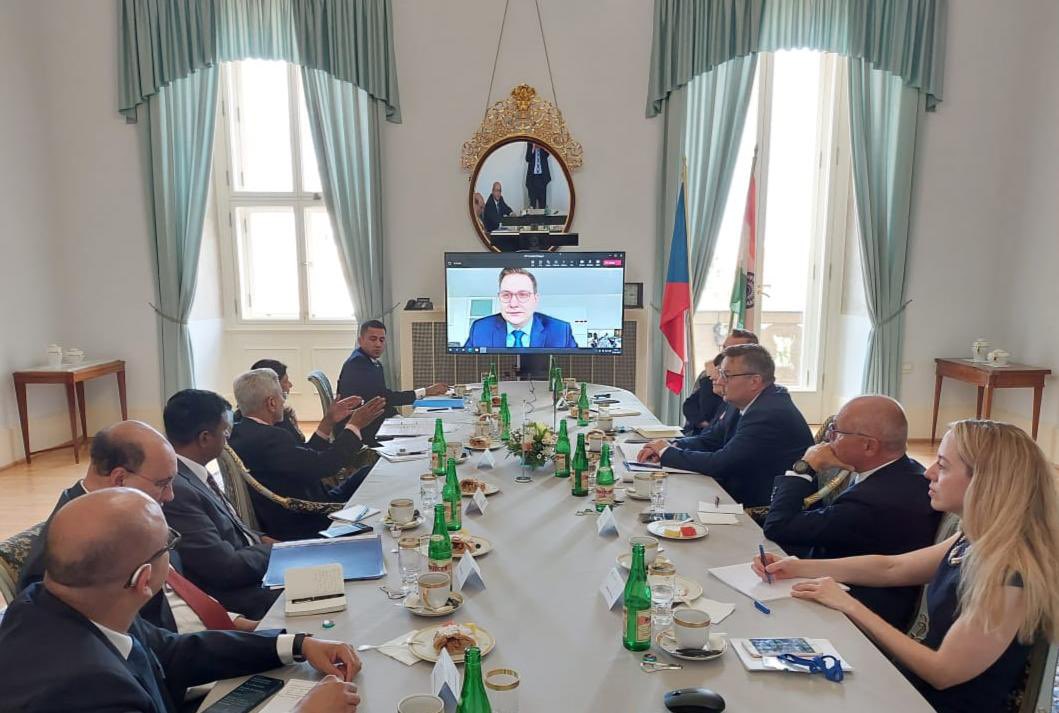 Prague, Jun 5 (PTI) External Affairs Minister S Jaishankar met his Czech counterpart Jan Lipavsky here on Sunday and had a productive discussion on the steady progress in bilateral cooperation, including in trade and defence, and exchanged views on the Indo-Pacific and the repercussions of the Ukraine conflict.

Jaishankar is here on the last leg of his two-nation tour to Slovakia and the Czech Republic to impart further momentum in ties with the two central European countries.

The Czech Republic will be taking over the European Union presidency from July 1.

“Noted the steady progress in bilateral cooperation, including in trade, defence, S&T, and people-to-people exchanges. Welcomed our trade level crossing US$ 2 billion. Exchanged views on the repercussions of the Ukraine conflict and the Indo-Pacific,” Jaishankar said in another tweet.

He also paid his respects to Rabindranath Tagore, who is widely admired by Czech people, at a memorial in a street named after the first Indian Nobel laureate.

Earlier, Jaishankar held a meeting with a delegation of Czech Members of the European Parliament and had a “good discussion” on India’s ties with the EU and the Czech Republic, the Indo-Pacific, food and energy security and digital cooperation.

The external affairs minister arrived in Prague on Saturday from the Slovakian capital Bratislava.

In Prague, he began his engagements by meeting a delegation of Czech Members of European Parliament (MEPs) Jan Zahradil, Tomáš Zdechovsky, Mikulas Peksa and Veronika Vrecionova.

“Began my engagements in Prague by meeting a delegation of Czech MEPs. A good discussion on India’s ties with EU and the Czech Republic, the Indo-Pacific, food and energy security and digital cooperation,” Jaishankar said on Twitter.

India, the US and several other world powers have been talking about the need to ensure a free, open and thriving Indo-Pacific in the backdrop of China’s aggressive military manoeuvring in the region.

China also claims nearly all of the disputed South China Sea, though Taiwan, the Philippines, Brunei, Malaysia and Vietnam all claim parts of it. Beijing has built artificial islands and military installations in the South China Sea.

Jaishankar, after his meeting with the delegation of Czech MEPs, thanked them for taking time out on a Sunday.

His visit comes at a time when Europe is grappling with the implications of the Russian invasion of Ukraine and persistent efforts by the European countries to convince India to take a tougher position on Moscow for its actions.

The Ministry of External Affairs had said in a statement ahead of his departure that Jaishankar’s will discussions with his Czech counterpart will provide an opportunity for a “comprehensive review of our bilateral cooperation”.

In addition to meeting the political leadership of the country, Jaishankar will also interact with a cross-section of the Indian diaspora, including Indian students in the Czech Republic.

“India has traditionally enjoyed close and friendly ties with both Slovakia and the Czech Republic. The external affairs minister’s visit will impart further momentum to bilateral relations with the two Central European countries,” the MEA had said.