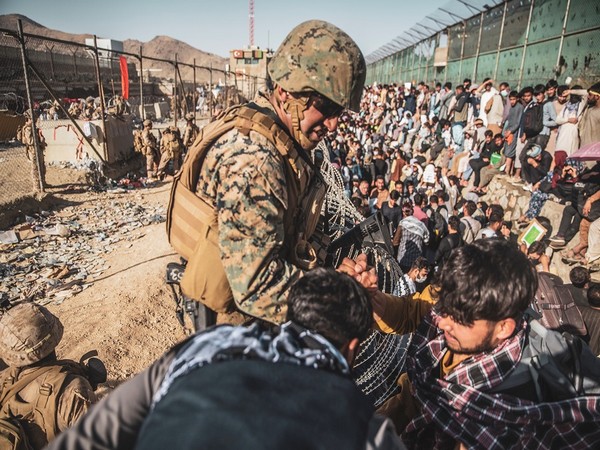 Washington [US], August 28 (ANI): ISIS-Khorasan, the Islamic State’s Afghanistan and Pakistan arm, the group behind the Kabul airport attack is trying to turn the Biden administration’s exit into a bloody spectacle.

Hannah Allam and Souad Mekhennet, writing in The Washington Post said that for months, terrorism analysts warned that Islamic State-linked terrorists in Afghanistan would try to turn the Biden administration’s exit into a bloody spectacle.

On Thursday, a suicide bomber and multiple ISIS-K gunmen killed 13 US service members and at least 169 Afghan civilians in the attack at the Kabul airport.

With its signature blend of complexity and cruelty, the attack was seen by many observers as a reminder to the Americans and the Taliban that, no matter who was in the presidential palace, Afghanistan would remain contested, said Allam and Mekhennet.

Amira Jadoon, an assistant professor at the US Military Academy, has written extensively about ISIS-K, arguing that an unconditional US withdrawal and Taliban takeover would bring about “the most permissive” environment for the group to operate.

“And this is what we are seeing now,” Jadoon said. “ISK’s main goal right now is to stay politically relevant, disrupt efforts to stabilize the country, and also undermine the Afghan Taliban’s credibility.”

In the hours before the attack, US and Western governments warned of a specific threat related to ISIS-K and urged people to stay away from the airport. But the crowds returned Thursday, taking their chances before the evacuation window closed for good, reported The Washington Post.

In a speech from the White House on Thursday evening, President Biden blamed the Islamic State and addressed the attackers directly: “We will not forgive, we will not forget, we will hunt you down and make you pay.”

An August 17 US Defense Department report said, “ISIS-Khorasan exploited the political instability and rise in violence” from April through June “by attacking minority sectarian targets and infrastructure to spread fear and highlight the Afghan government’s inability to provide adequate security.”

“The blast at the airport today is showing that unfortunately, a very bloody future is ahead of us,” said an Arab intelligence official, who spoke on the condition of anonymity because they were not authorized to be interviewed, reported The Washington Post.

ISIS-K began operating in Afghanistan in 2015, according to a report by the Center for Strategic and International Studies.

Started in 2014 by Pakistani national Hafiz Saeed Khan, who pledged allegiance to the Islamic State’s former leader, Abu Bakr al-Baghdadi, it was a small band of mostly Pakistani militants operating in the eastern Afghanistan province of Nangarhar.

Some recruits came from the Taliban, though members of other extremist groups in the region also defected to the Khorasan group, according to the CSIS report.

As with other Islamic State affiliates, ISIS-K has stayed nimble and able to regroup after military blows. The founder died in a US airstrike in 2016, according to CSIS.

But, the United Nations estimates that ISIS-K retains a core group of some 1,500 to 2,200 fighters in Afghanistan’s Konar and Nangarhar provinces. Smaller cells are scattered across the country, said Allam and Mekhennet.

Attacks like the one at the airport are why armed groups are preparing for internecine battles, said an Afghan militant with ties to the Taliban and Al-Qaeda, who spoke on the condition that he be identified only by a nom de guerre, “Abu Muhammad”.

He also said that the terror attack at Kabul airport was “a punishment also for all those who want to leave Afghanistan to go and live in the West”.

Jadoon, the US Military Academy academic, and co-author Abdul Sayed reported in March that ISIS-K had claimed responsibility for 47 attacks in the first two months of 2021, comparable to the group’s peak years of 2017 and 2018, when it was linked to 100 and 84 attacks, respectively.

Jadoon said ISIS-K is probably contemplating a number of ways to take advantage of the fluid situation in Afghanistan right now.

She said three areas to watch are the group’s efforts to recruit from the Taliban and other terrorist groups, prison-break operations to free fighters and attempts to carve out strongholds in Nangarhar and Konar in order to stop the spread of ISIS-K. (ANI)