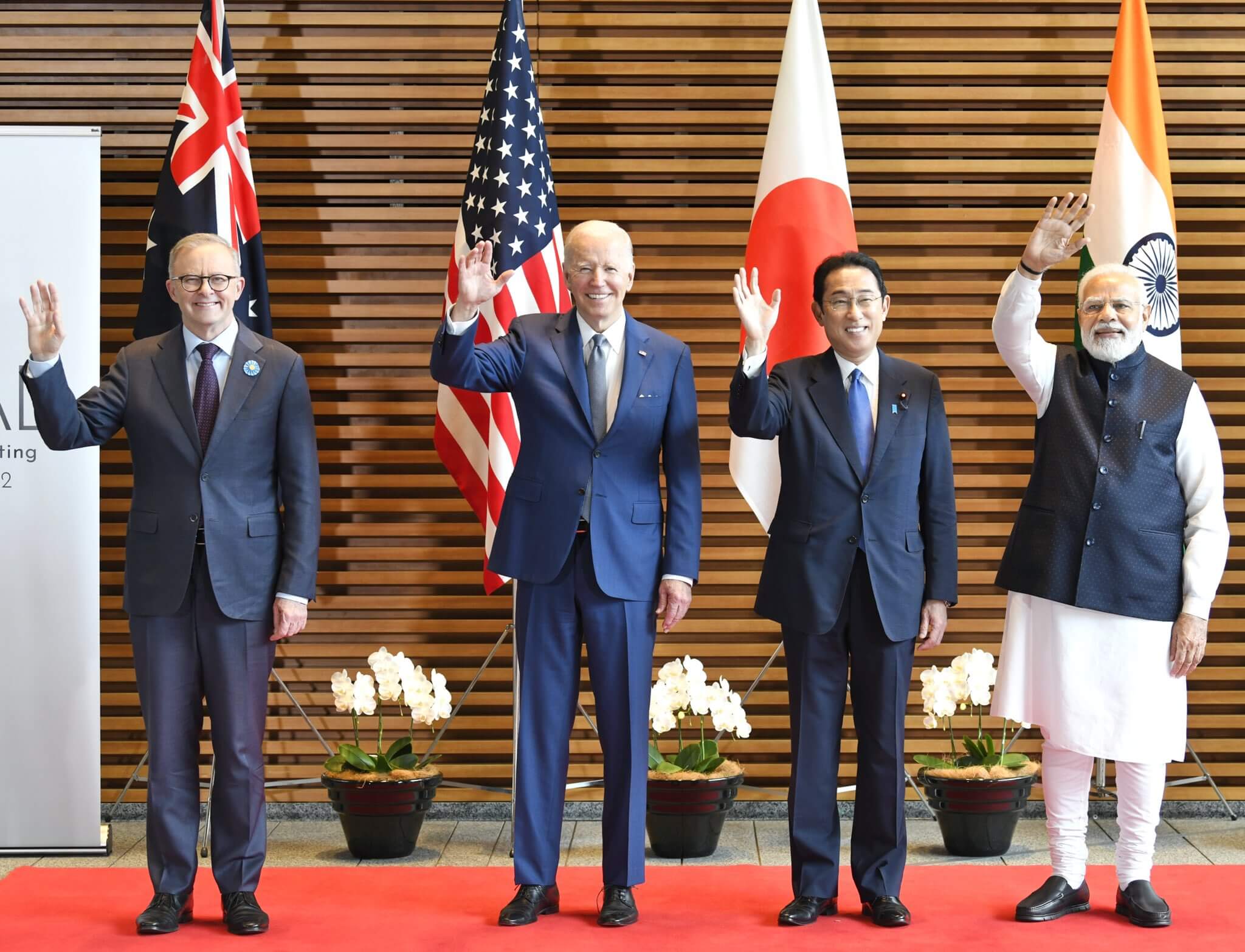 How much the world is nearing a catastrophic confrontation and how intimidated China feels about the response to its coercive aggression in the Indo Pacific, was made evident by the fact that even as the just concluded summit of the Quad was ending in the Japanese capital Tokyo, two warplanes each from China and Russia, flew over the Sea of Japan towards the East China Sea. Later two more Chinese aircraft relieved the earlier ones and flew with the Russian aircraft deeper towards the Pacific Ocean.

Although quoted as pre-arranged training manoeuvres, such instances where international summits of various groups are intimidated when their heads of state or government are meeting, is a new norm in the developing strategic tension of the world; an awkward method of strategic communication, to say the least. The Russians appear to have shed inhibitions and have come clearly on the Chinese side thus creating more distinct battlelines in the Indo Pacific region, something they were more reluctant to do before the war in Ukraine.

Ever since the not so elegant US withdrawal from Afghanistan on 31 August 2021 and then after outbreak of the three-month-old war in Ukraine, President Joe Biden’s ability to balance US interests in the Indo Pacific had been held in check. Getting out of Afghanistan and the stabilization of West Asia with reasonable success, were supposed to pave the way for enhanced US focus towards the Indo Pacific.

However, the crisis in Ukraine has activated the European theatre in no small way. China’s assessment was likely veering towards the belief that the US would be unable to find the ability to simultaneously focus on Europe and the Indo Pacific. Yet, despite Joe Biden’s recent record low approval ratings, he has been decisive in attempting to ensure that the Indo Pacific remains in US sight. The run up to and the conduct of the high-profile Quad summit has definitely demonstrated US intent towards preventing diversion from the larger goal of preventing China’s unbridled domination over its neighbourhood and its natural extension which happens to be a crucial strategic zone for US interests.

A lot was packed into the summit attended by the four member nations; US, Australia, Japan and India. It provided Prime Minister Narendra Modi the opportunity to delve into relevant aspects of foreign policy, strategic security and economic issues all in a very short time. The relevance of giving substance to the Look East policy, although in a different context, cannot be lost especially so soon after PM Modi completed his first physical foreign tour of 2022 with his visit to Germany, Denmark and France. The latter visit was praised for the transformational content in its outreach and putting ‘Look West’ also on the radar.

To counter China’s economic dominance of the Indo Pacific a fresh economic arrangement proposed by President Joe Biden has found favour with India. The Indo Pacific Economic Framework for Prosperity (IPEF) seeks to counter China’s influence with creating integrated, resilient and clean economies. IPEF will be a group similar to RCEP (which India did not join due to China’s domination of the same) but without China, Myanmar, Cambodia and Laos; the last three being China’s closest supporters. 13 nations are a part of IPEF which the US has termed as ‘non-free trade’ and ‘non-security’ in outlook.

IPEF obviously has a strategic orientation without being security branded. It will be another platform through which the US hopes to take on board many like-minded states which have been chary of China’s ways. The IPEF initiative, primarily a step to facilitate and urge member nations to decouple themselves from the Chinese stranglehold, was also a part of the larger communication strategy at play by the US. This included the demonstration of commitment to the Indo Pacific, across domains. The event preceded the Quad summit by a day but set the tone in no small measure. In fact, it brought body to the Quad Plus process, bringing important nations such as South Korea, Vietnam and Philippines (all important stakeholders) besides many other important ASEAN states and included New Zealand, thus taking concerns further deep into the South Pacific.

The most important item in the series of engagements underway at Tokyo was the Quad summit itself. While a divergence in views on the war in Ukraine was expected and did arise, there was total unanimity in the response of the four nations; US, Australia, Japan and India.

PM Narendra Modi has been a part of the Quad leadership quartet the longest and therefore brings institutional knowledge and wisdom to the group. PM Anthony Albanese of Australia came to Tokyo within hours of his swearing in ceremony and will obviously be a very important personality, especially Australia’s role seems to be expanding with the potential entry of China into the South Pacific islands. Japanese PM Fumio Kishida has been around long enough to know the ropes of the Indo Pacific and it’s under his leadership that Japan is making further strides on the military front. Of course, it was Joe Biden’s total trust in India’s commitment to the Quad that ensured that no crack was allowed to widen.

Keeping the interests in the Indo Pacific bracketed away from the influence of events in other regions is a huge challenge itself. The maturing of the Quad was on display as each of the leaders gave their public statements on the basis of their views and perceived national interests. None of these clashed. The common purpose of bringing unanimity, to counter China’s belligerence, was achieved without any roadblocks small or big. China often brings coercive, provocative or unilateral actions seeking change in the status quo of the Indo Pacific. Against that it is the ‘rules-based order’ and the ‘open and free’ environment desired by the nations of the region against China’s disruptive strategies which has driven the success so far. However, the securitization of the Quad may yet be far and the desire to achieve that too remains in the grey zone.

While China may consider the Quad summit and the deliberations as provocation, India needs to be clear that its stakes also get enhanced. The quasi-security label gives the Quad the leeway to keep strategic issues on the agenda. However, Indian policy makers have always to be mindful of the fact that they have a common land border with China with several disputed areas. China also has a clear intent to keep India militarily engaged on the northern borders, as a part of a broader strategy to prevent its strategic rise in competition with China. The provocations by China against India in April 2020 made evident China’s discomfiture with India’s progressively gaining confidence. It was concluded by many analysts that these provocations would remain on China’s strategic agenda to force India to pull back from the Strategic Partnership with the US and its like-minded countries.

However, it’s a measure of India’s confidence that it has pursued its interests without any compromise. Perceived bumps which may have emerged on the road of Indo US relations in terms of India’s neutrality over Russia’s actions in Ukraine, seem to be getting ironed out with the US adopting an approach of strategic accommodation. President Joe Biden has been enormously supportive also, after initial misgivings. PM Modi’s personal record of governance especially when it came to handling the pandemic and the crisis with China was a factor which found ready praise.

On the bilateral side much was achieved in the one-on-one meetings with the other leaders by PM Narendra Modi. What is extremely important is the US President’s full commitment towards committing military resources for the security of Taiwan. The immediate future will witness a test of nerves as China checks out the US for its commitment. The Sino-Indian border which is currently quiet with negotiations ongoing is also likely to face some uncertainty. India has to be prepared for a showdown anywhere along the long border as a part of China’s messaging to the US camp. It’s the Russian linkage which will keep China in dilemma because it will make options for Russia extremely difficult and not getting Russian support for its ventures will dilute its stand.

May 2022 has been a good month for Indian Foreign Policy; the East and the West smartly balanced, but testing times lie ahead as the Ukraine war winds down and China starts to get impatient over Taiwan.

May 31, 2022
QUAD? I am quite aware what US, Japan, Australia want. Here is what India needs. US pressure, military intelligence, to neutralize Pakistani military (clandestine) operations. If we cannot get that, then all we are doing is serving QUAD, we don't receive any benefits.