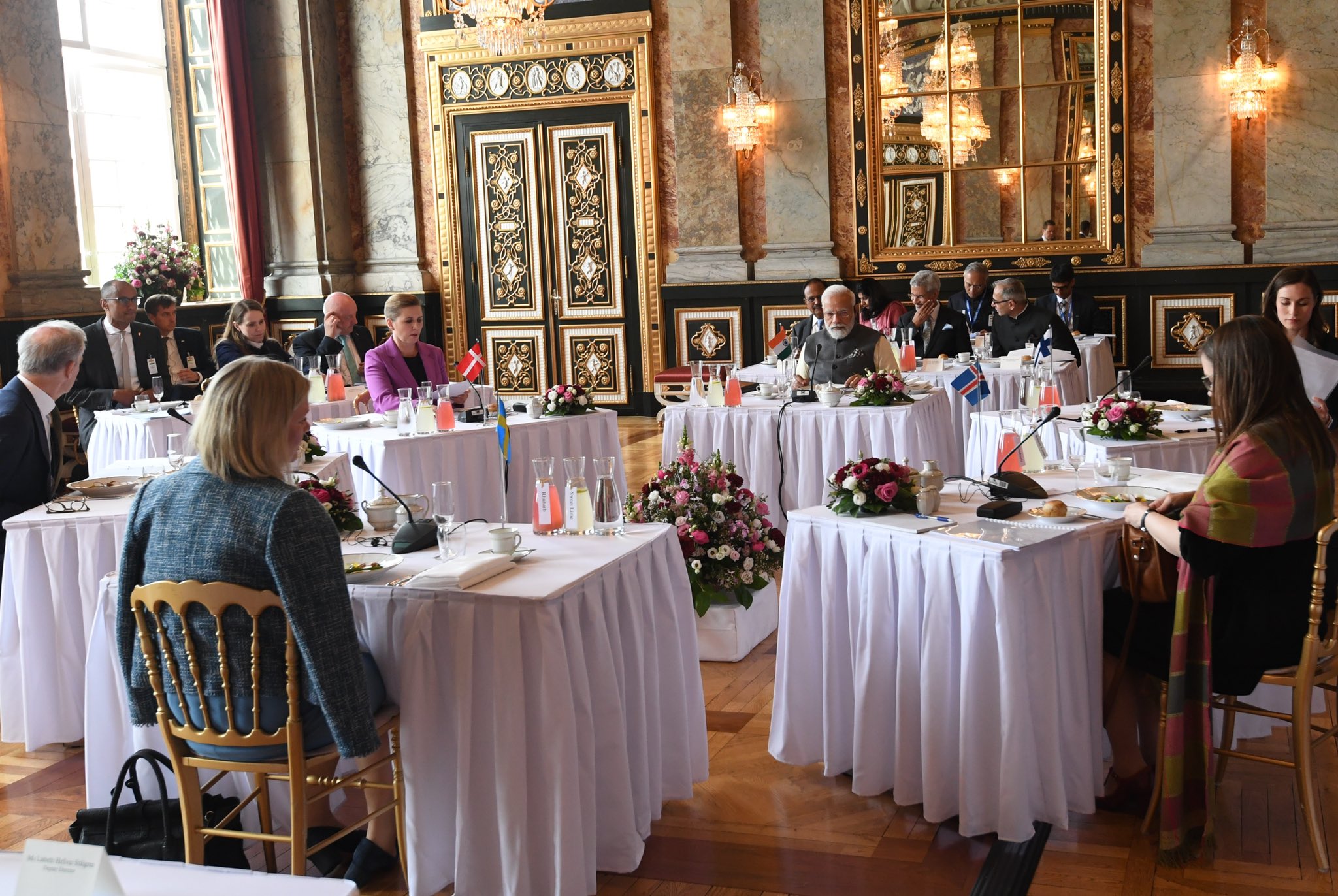 Copenhagen, May 4 (PTI) India and the five Nordic countries on Wednesday expressed serious concern over the humanitarian crisis in Ukraine, called for an immediate cessation of hostilities and “unequivocally condemned” the civilian deaths in the eastern European country.

At the second India-Nordic summit, Prime Minister Narendra Modi and his counterparts from Denmark, Finland, Iceland, Norway and Sweden, discussed the “destabilising effect” of the conflict and its broader implications while agreeing to remain closely engaged on the situation, according to a joint statement. In his address, Modi invited the sovereign wealth funds of the Nordic countries to invest in India and noted that New Delhi’s Arctic policy provides a good framework for the expansion of cooperation in the Arctic region.

The statement said India and the Nordic countries affirmed their support for a rules-based international order and for multilateral institutions and their commitment to work towards making them more inclusive, transparent, and accountable with the aim of addressing global challenges more effectively. The summit in Copenhagen reviewed overall ties and vowed to boost cooperation between the two sides in areas of blue economy, clean energy, climate change, innovation and digitalisation.

It said the leaders reiterated the need for an immediate cessation of hostilities in Ukraine and emphasised that the contemporary global order has been built on the UN Charter, international law and respect for sovereignty and the territorial integrity of states. “They discussed the destabilising effect of the conflict in Ukraine and its broader regional and global implications. Both sides agreed to remain closely engaged on the issue,” it said.

“India-Nordic Summit will go a long way in boosting India’s ties with the region. Together, there is much that our nations can achieve and contribute to global prosperity and sustainable development,” Modi tweeted.The joint statement said the leaders agreed that pressing challenges such as tackling climate change, the COVID-19 and increasing food and energy insecurity across the world required international cooperation, a collective response and global solidarity.

“India and the Nordic countries were committed to doing so and to working together in multilateral fora to promote international cooperation and promote human rights as well as equal opportunities for all people without prejudice,” it said. The prime ministers reaffirmed the importance of free trade as a driver for achieving inclusive growth and realising sustainable development goals.

At the summit, the two sides underlined the need for reform of the UN including the Security Council, to make it more effective, transparent and accountable. They also favoured reform of the World Trade Organisation, as well as strengthening collaboration on global health issues, while the Nordic Countries reiterated their support for India’s Permanent Membership of a reformed and expanded UN Security Council. “The prime ministers agreed that the blue economy can deliver economic growth, new jobs, improved nutrition, and increased food security if managed sustainably,” the statement said. “As leading ocean nations, India and the Nordic countries agreed on the benefits of partnering on transforming the shipping industry towards a low carbon future through the exchange of good practices and technology transfers,” it said.

The leaders discussed the potential of stimulating business cooperation and investments in sustainable ocean industries in India and the Nordic countries, including in the maritime, marine, and offshore wind sectors. “India and the Nordic countries were committed to follow up on the historic decision at UNEA 5.2 for negotiating an international legally binding instrument to end plastic pollution with an ambition to completing the work by 2024,” the statement said.

The summit welcomed the Indian government’s commitment to innovation and digital initiatives. Several synergies related to India’s rich pool of talent as well as growing innovation environments were identified at the summit. “The importance of a rules-based multilateral trading system, open and inclusive trade as drivers for innovation was underlined. India and the Nordic countries emphasised the importance of green technologies and industry transition with Leadership Group for Industry Transition (LeadIT) as a notable example,” the statement said.

It said transport systems, including aviation knowledge exchange, maritime solutions and port-modernisation were important for enhancing trade between the Nordic countries and India. “There was a shared interest in stimulating investment in innovative and sustainable solutions as well as identifying new opportunities in sectors such as food processing and agriculture, health projects and life sciences,” it said.

On digitalisation, the prime ministers noted that technology has never been more prevalent in the lives of people around the world. The leaders noted that ‘Digital India’ is an example of government services made more easily available to citizens electronically. “Nordic know-how in harmony with initiatives such as Made in India supports digitalisation efforts and ensures that the technological future belongs to all citizens, everywhere,” the statement said.

It said the prime ministers see opportunities for increased co-operation in the Arctic on polar research, climate and environmental issues. “The summit emphasized the importance of strong people-to-people contacts through education, culture, labour mobility and tourism – all areas where the cooperation between India and the Nordic countries are expanding,” the statement said.

May 05, 2022
The total population of Nordic countries is 26 million (Mumbai has likely that many people). They totally produce about $560 billion in wealth. We produce about five times that in wealth, shared among 50 times the people. Yet we imagine a 'partnership' that will examine what Russia does in Ukraine. To what end is this 'joint watching?' Does that mean Nordic countries have similarly agreed to pay attention to what Pakistan does in India, and what China does at our border? No? Then what are we talking about here other than optics?