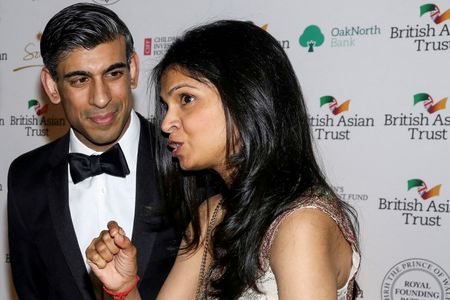 London, Jul 18 (PTI) The UK’s prime ministerial race frontrunner, Rishi Sunak, spoke of his pride in what his Indian parents-in-law – Infosys co-founder Narayana Murthy and Sudha Murty – had achieved, as he fought back over media commentary around wife Akshata’s family wealth.

In a heated televised debate, the 42-year-old UK-born former Chancellor was asked about his wife’s tax affairs which had been in the headlines earlier this year, when she voluntarily relinquished her legal non-domicile status to pay taxes on her Indian income from Infosys shares also in the UK.

Sunak was also confronted about his own US Green Card status, which he reportedly gave up after a few months in the Chancellor’s job at No. 11 Downing Street. “So, I’ve always been a completely normal UK taxpayer; my wife is from another country so she’s treated differently, but she explained that in the spring and she resolved that issue,” said Sunak, during the ITV channel debate on Sunday night.

“There is a commentary about my wife’s family’s wealth. So, let me just address that head on because I think it’s worth doing because I’m actually incredibly proud of what my parents-in-law built. “My father-in-law came from absolutely nothing, just had a dream and a couple of hundred pounds that my mother-in-law’s savings provided him, and with that he went on to build one of the world’s largest, most respected, most successful companies that by the way employs thousands of people here in the United Kingdom,” he said.

‘It’s an incredibly Conservative story, actually it’s a story that I’m really proud of and as Prime Minister, I want to ensure that we can create more stories like theirs here at home,” he said. The exchange was the latest head-on clash between the five remaining candidates in the race to succeed Boris Johnson as Conservative Party leader and new British Prime Minister.

A snap opinion poll by Opinium found that Sunak was the clear winner of Sunday’s debate, ahead of the third round of voting by Tory MPs on Monday to narrow down the field further to get to the final two candidates. At least one of the contenders with the least votes will be eliminated by later on Monday, followed by another round expected on Tuesday. Around 24 per cent of the 1,001 people who took part in the Opinium poll thought the former Chancellor performed best, followed by Commons Foreign Affairs Committee Chair Tom Tugendhat at 19 per cent.

Trade minister Penny Mordaunt was at third with 17 per cent, followed by Foreign Secretary Liz truss with 15 per cent. Former equalities minister Kemi Badenoch was in last place, according to the poll of viewers, with 12 per cent of the votes. However, a Conservative Home website survey of the Tory membership grassroots published on Sunday night suggests Badenoch’s popularity with members may be rising as she has emerged as the top choice among them, followed by Mordaunt.

According to that survey, Badenoch would beat Mordaunt 59 per cent to 31 per cent in a head-to-head if they made it into the final two. Mordaunt would also lose out to both Truss and Sunak. The battle is now focussed on the second spot, with Conservative members of Parliament now being lobbied for support around who is best placed to beat Sunak in the final leg of the race when the Tory membership have their say in postal ballots from the end of this week.

The winner of that ballot will be known by September 5 and go on to address Parliament as the new Prime Minister that week.