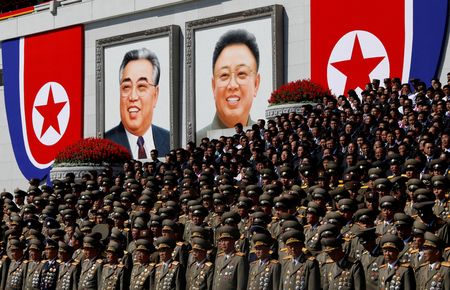 Several hundred personnel were seen in formation at the Mirim Parade Training Ground in Pyongyang, which is designed to be a replica of the city’s Kim Il Sung Square, where parades are usually held, 38 North, which monitors North Korea, said in a report. More than 240 buses were parked nearby, but there were no signs of major military hardware, such as North Korea’s ballistic missiles, the report said. “That could indicate an upcoming event will consist largely of people or that they are yet to arrive,” 38 North said.

The report comes a day after Seoul-based NK News, which covers North Korea, cited informed sources and satellite imagery that indicated possible preparations for a parade, including jet aircraft over Pyongyang and marching formations at the training ground since late January. North Korea plans to celebrate the 80th birthday anniversary of leader Kim Jong Un’s late father, Kim Jong Il, on Feb. 16, and the 110th birthday anniversary of his late grandfather and founder of North Korea, Kim Il Sung, on April 15.

Both are major holidays in North Korea, which often uses such occasions to display military might at massive parades full of goose-stepping soldiers and rows of weapons, including in some cases its large missiles. “North Korea does not announce these kinds of events in advance, but over the last several years, training at the Mirim Parade Training Ground has usually begun one to several months ahead of the festivities,” the 38 North report said.

North Korea conducted a record seven missile tests in January, and has suggested it could resume tests of its longest-range intercontinental ballistic missiles or nuclear weapons for the first time since 2017 amid stalled denuclearisation talks with the United States. Analysts say North Korea could use the holidays to test a major new missile or other weapon.

A resumption of North Korea’s nuclear weapon or long-range missile tests would “instantly” send the peninsula back into crisis, outgoing South Korean President Moon Jae-in said this week, calling for measures to prevent that from happening.