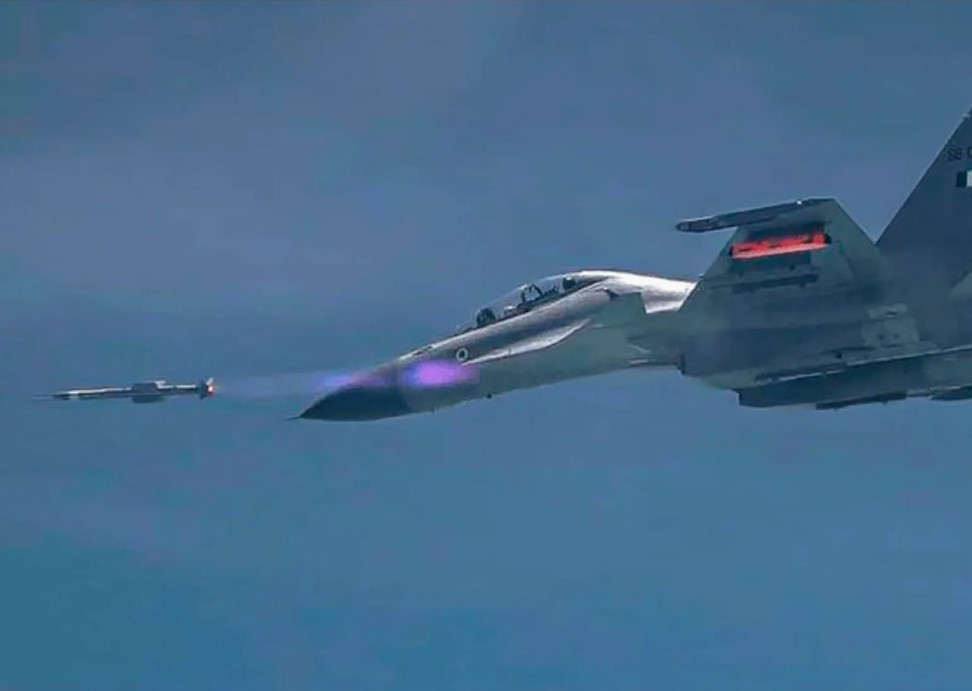 A testimony to India’s self-reliance in the Defence Sector and progress in the arena of air-launched weapons was the inking of the Rs. 2971 Crores deal by MoD with Bharat Dynamics Limited (BDL) on 06 June 22 for provision of the Astra Mark I Beyond Visual Range (BVR) AAM for the Indian Air Force (IAF) and the Indian Navy (IN) under the Buy Indian IDDM (Indian Designed, Developed and Manufactured) category for capital acquisitions, as contained in the Defence Acquisition Procedure (DAP)-2020. This category essentially covers the procurement of a product from an indigenous vendor that has been indigenously designed, developed and manufactured with a minimum of 50% indigenous content. IDDM, it would suffice to say, is the most preferred category under the DAP.

The IAF’s Medium-range (MR) AAM inventory (BVR AAMs with ranges ≥ 50 Km) consists of, among others, the Israeli I-Derby and the French Mica AAMs, which are set to continue in service into the foreseeable future.  The 50 Km range I-Derby MR AAM, in operational service since 2012, is a BVR missile equipped with active radar homing and FFC and has been nominated as the primary AAM for the TEJAS LCA.  The Mica fulfils short and medium-range roles due to its unique interoperable Radio Frequency (RF) and Imaging Infra-Red (IIR) seekers, while its thrust vector control unit gives it superior mobility at dogfight ranges. Presently the upgraded Mirage-2000 and the Rafale aircraft mount this AAM. India’s Rafales can also mount the MBDA’s ramjet-powered Meteor BVR AAM. The consequent greater engine power accords faster speeds, longer reach and greater manoeuvrability to the Meteor, resulting in a relatively large no-escape zone and therefore greater lethality.

BrahMos Aerospace has also committed to developing the BrahMos AAM by 2024, which will be primarily focussed towards heavy aerial targets like enemy Airborne Early Warning and Control (AWACS) and other aircraft of similar dimensions.

While the development roadmap of the Astra is two decades old, the critical need for a BVR AAM was underlined when, on 27 February 2019, a day after India targeted terrorist camps in Balakot across the Line of Control  with air strikes, Pakistani F-16s attempted to engage own aircraft including the Su-30 MKI, the latter scrambled in response to this Pakistani misadventure. While any aerial activity closer than 10 Km to the LC is considered an airspace violation by India, the F-16s fired the AIM-120 Advanced Medium-Range AAM (AMRAAM) which, with a max range of 70 Km (recent upgrades have enhanced engagement ranges to upto 160 Km), was capable of engaging aerial targets on the Indian side while staying well within Pakistani airspace. India’s Su-30s were then equipped with the Vympel R-77 MR AAM which was inferior to the AIM 120 in terms of range, guidance and countermeasures due to the far lesser number of upgrades received for the R-77 as compared to those of the AIM-120. In essence, therefore, was the immediate requirement of a true-blood BVR AAM with advanced guidance, propulsion and countermeasure features.

ASTRA Mounted on Su-30 MKI Prior to Flight:Source-overtdefense.com

Design.   The Astra is India’s first indigenous AAM developed by DRDO and manufactured by BDL. The AAM is capable of engaging aerial targets over a wide ambit, from 10 Km to 110 Km, thus making it a versatile air-to-air weapon that is effective in close-in dogfights and for stand-off attacks against strategic targets. The Astra is envisaged to be integrated onto the Su-30 MKI & MiG-29 Air Superiority Fighters, the Light Combat Aircraft TEJAS and the Mirage-2000 Multi-Role Fighter, as also the future indigenous 6th Generation stealth-enabled Advanced Medium Combat Aircraft (AMCA) (briefly covered @ https://chanakyaforum.com/lca-tejas-ready-to-touch-the-skies-with-glory/ ).  The Astra is a BVR AAM, featuring multi-mode guidance (Inertial Navigation System {INS} & datalink for mid-course guidance and active radar homing for terminal guidance). The AAM’s active radar seeker can lock on to aerial targets with a radar cross-section (RCS) of upto 5m2 from upto 15 Km away at an aiming angle of upto 45º, thus according greater engagement probability! The AAM is equipped with a smokeless solid-propellant motor capable of propelling it upto Mach 4.5 (faster than any known fighter aircraft) and upto an altitude of 66000 feet. Astra mounts a 15 Kg High explosive (HE) Pre-Fragmented (PF) warhead with a proximity fuze that does not require a direct hit to activate, thus further increasing engagement probability! The AAM has the unique capability of locking on to its target before OR after launch, thus providing significant flexibility to the pilot in aerial combat!

Development.   The Astra’s initial external design took a few cues from the Vympel and Matra AAMs in terms of dimensions and contours.  Astra hit the drawing board in the early 90s as a result of a feasibility study carried out into development of a BVR AAM, with complementarity then envisaged with the TEJAS Program. The Astra Program was formally sanctioned in 2004 with a budget of Rs. 955 Crores. The Program was not a part of India’s Guided Missile Development Program (IGMDP), though the research pool and expertise were heavily drawn from the latter. The Astra Program was led by DRDO as the principal developer, with assistance from Hindustan Aeronautics Limited (HAL) and Electronics Corporation of India Limited at Hyderabad. Astra was put through ground tests between 2004 and 2012 to validate sub-systems and assemblies including the airframe, propulsion & control systems, multi-mode guidance and night operability. Development trials of the Astra have been carried out with effect from December 2012 from the Integrated Test Range at Chandipur, Orissa, when the AAM successfully intercepted a Pilotless Target Aircraft (PTA), Lakshya, thus validating the propulsion and guidance systems. The initial operational prototype was a relatively heavy SR AAM with a range of 25-40 Km and a weight of 330 Kg. The short, stubby canards of the initial prototype caused problems in control and performance, which were accentuated at high altitudes. In response, the Astra was redesigned two years later with an improved propulsion system and forward-mounted cropped delta-wings. A further redesign took place in 2013 in response to flight failures due to incompatibility between control surfaces. While ground-launched trials are imperative for stand-alone validation of sub-systems, launch from a fast-moving aerial fighter platform, simulating combat conditions, is the true test of operational compatibility.  Apropos, the Su-30 MKI was selected for captive flight (CF) and air launch trials, which were carried out multiple times, with the first successful air launch from a Su-30 MKI carried out on 04 May 2014. The fifth air launch was carried out on 19 March 2015, wherein Astra successfully engaged a PTA while negotiating a 30G manoeuvre, thus proving its capability to engage targets within tight turn radii, an essential prerequisite for dogfight engagement! Astra saw operational deployment when it was fired during IAF Exercise Iron Fist on 18 March 2016 at Pokhran, Rajasthan. 2017 saw a series of CF trials wherein the AAM’s existing Russian AGAT 9B1103M active radar seeker was replaced with an indigenous Ku-band seeker developed by the DRDO. The seeker was successfully evaluated along with its Electronic-Counter-Counter-Measure features, which are incorporated to ensure that the AAM is not rendered ineffective by adversary’s Electronic-Counter-Measures. Simultaneous warhead trials and supersonic launch trials also proved successful. On 17 September 2019, DRDO announced that the AAM had successfully intercepted a live target at a range of 90 Km, thus validating its BVR capability!

Post the above successful validation, the acquisition of upto 250 Astra Mk-1 BVR AAM for IAF and IN at approximately Rs. 7.5 Crore each (as compared to approximately Rs. 16.5 Crores per MBDA Meteor AAM!) was approved in July 2020 by the DAC, with the contract as above being inked soon after. Post finalisation of the contract for the Astra Mark 1, the DRDO is now concentrating on development/testing of the Astra Mark 2, equipped with a dual-thrust pulsed rocket motor, which will enable swift acceleration to high speeds in the ‘boost’ phase followed by steady controlled flight in the ‘sustain’ phase, thus improving accuracy and enhancing effective range to 160 Km. The Mark 2 will also feature improved resistance to jamming and a far higher indigenous content. The Mark 2 should see operational induction within the first half of this decade, as a precursor to fielding of the Astra Mark 3, which will feature a Solid Fuel Ducted Ramjet (SFDR) Motor being developed by DRDO to propel it to 350 Km, making it a true-blood, world-beating standoff BVR AAM. Both Mark 2 and Mark 3 will feature thrust vector control, which will allow positive control over the missile’s flight, thus significantly contributing to mid-air manoeuvrability, especially at lower altitudes to engage close-in targets. DRDO is also working on the Astra IR Short Range AAM, which nose-mounts a passive IIR seeker for terminal guidance, allowing the AAM to autonomously detect, track and lock on to aerial targets at close ranges. The shorter range of the Astra IR means that the missile does not have to be intimately integrated with the aircraft’s avionics and can therefore be used with a larger variety of aircraft, as a complement to the Astra BVR AAM.

How Does the Astra Compare?

The Astra, as an immediate comparison, can be weighed against the US  AIM-120C BVR AAM, which arms the Pakistani F-16 Fighter Aircraft and the Chinese PL-15 which arms the JF-17 Fighter and the J-20 Stealth Fighter, the former also in the Pakistan Air Force Inventory.

The dual-pulse motor of the PL-15 would give comparable acceleration to propel it to a similar max speed of Mach 4.5 and a greater max range in excess of 200 Km. However, the export version, PL-15 E, has displayed a max range of 145 Km, making it inferior to the under-development Astra Mark 2. The Active Electronically Scanned Array (AESA) Radar Seeker of the PL-15 would prove advantageous in target detection and tracking. The PL-15 is however a heavy missile, with weight of over 200 Kg, which would significantly impair manoeuvrability, especially at shorter ranges. It is likely to therefore prove inferior to the Astra in a close-combat situation.

The Astra AAM series of missiles enjoy a future-ready roadmap with the induction of the Mark 1 variant and the testing/development of Astra Mark 2 and 3. The multi-role Astra BVR AAM will give India the leading edge in close combat and stand-off targeting in the region, while playing its role towards reducing the dependency of the IAF on the volatile global aerial weapons market.