First ever repair of a US Navy Ship in India; ‘Charles Drew’arrives at L&T Kattupalli shipyard, in huge boost to ‘Make in India’ & ‘Aatmanirbharta in Defence’ 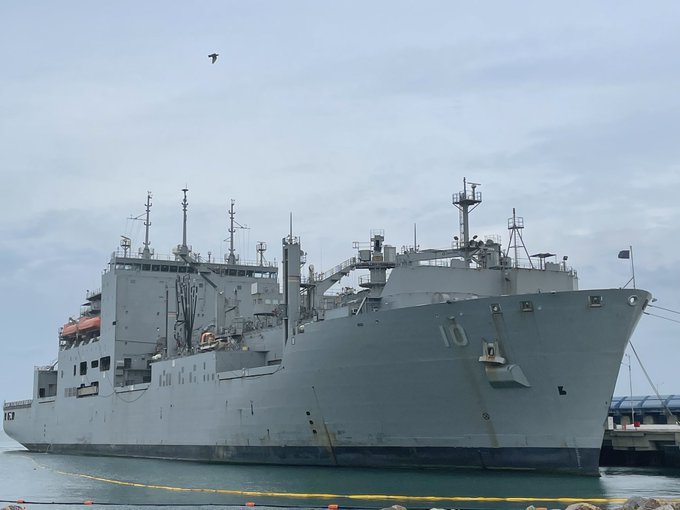 Providing a huge boost to ‘Make in India’ & ‘Aatmanirbharta in Defence’ and adding a new dimension to the burgeoning Indo-US strategic partnership, US Navy Ship (USNS) Charles Drew arrived at L&T’s Shipyard at Kattupalli, Chennai on August 07, 2022 for undertaking repairs and allied services. This is the first ever repair of a US Navy ship in India. The US Navy had awarded a contract to L&T’s Shipyard at Kattupalli for undertaking maintenance of the ship. The event signifies the capabilities of Indian shipyards in the global ship repairing market. Indian shipyards offer wide ranging and cost-effective ship repair and maintenance services, using advanced maritime technology platforms.

Terming the event as a red-letterday for the Indian shipbuilding industry and the Indo-US defence relationship, Defence Secretary Dr Ajay Kumar said, “We are indeed pleased to welcome US Naval Ship USNS Charles Drew to India, for making her voyage ready. India’s initiative also assumes special significance in furthering the strategic partnership between India and the US. It marks the beginning of a new chapter for deeper engagements”.

Dr Ajay Kumar described the arrival of USNS Charles Drew for repairs as a sign of a maturing Indian shipbuilding industry. “Today, India has six major shipyards with turnover of nearly $2 billion. We are making ships not only for our own requirements. We have our own design house capable of making all kinds of state-of-the-art ships. The country’s first Indigenous Aircraft Carrier Vikrant is a shining example of the growth of the Indian shipbuilding industry. Under the new innovation ecosystem, vessels capable of undertaking autonomous missions have been built by Goa Shipyard Limited and some of our start-ups. The shipbuilding industry today is not just carrying out conventional things, but is also amalgamating the latest technologies with it,” he said.

The Defence Secretary also asserted that the ties between India & US have been expanding in scale & scope and are based on common values&beliefs of an open, inclusive and rule-based order in Indo-Pacific and rest of the global common systems. He added that there has been a tremendous amount of traction in the defence industry cooperation over the last couple of years between the two countries.

“Indian defence exports have seen a massive increase in the last four-five years. Exports, which were worth about Rs 1,500 crore in 2015-16, have now grown by 800% to around Rs 13,000 crore. A major destination for Indian exports is the US,” Dr Ajay Kumar said, thanking the US partners for their cooperation and support to the Indian defence industry. He hoped that the defence exports will increase further in the times to come.

US Consul General in ChennaiMs Judith Ravinsaid: “In April, at the US-India 2+2 Ministerial Dialogue, US Secretary of State Antony Blinken and Secretary of DefenseLloyd Austin affirmed their intention to explore utilising Indian shipyards for repairs on US Navy vessels. This inaugural repair of USNS Charles Drewis a landmark development to be celebrated as a symbol of our strengthened US-India partnership.”

Defence Attaché at the US Embassy at New Delhi Rear Admiral Michael Baker said: “Our shipping industries positively contribute to a free and open Indo-Pacific by partnering to deliver effective, efficient, and economical repair of military vessels.”

Member of the Executive Council and Advisor to the CEO of L&T for Defence and Smart Technologies Shri JD Patil said, the Marine Sealift Command of the US Navy had undertaken rigorous evaluation of select shipyards in India and cleared L&T for undertaking repairs on their vessels. It is a recognition for the modern infrastructure at the shipyard built to global standards.

The USNS Charles Drew will be at Kattupalli shipyard for a period of 11 days and undergo repairs in various areas.