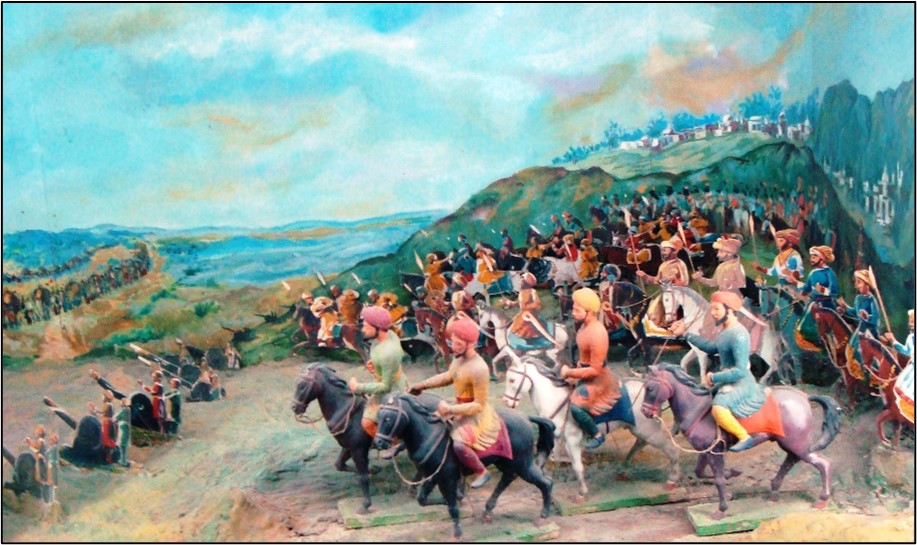 In the ‘Trilogy’ of the Battles of Panipat, wherein three historical battles were fought, none impacted the destiny of the Indian Subcontinent for the next 230 years as did the First Battle of Panipat. While many epistles and a multitude of versions have been written on this epic battle,  it is important to understand the build-up to this confrontation between the Mughal and Lodi Dynasties. This historical encounter was momentous for a number of reasons, its most significant reason being that the battlefield of Panipat on that fateful day, bore witness to the sun rising on one great Empire and setting on another.

The Battle, which was fought on the plains outside the city of Panipat on 21 April 1526, sowed the seeds of the Mughal Rule in the Indian Subcontinent under Babur, a warrior chieftain from the region that today represents Uzbekistan, in the Central Asian Republics. Babur historically defeated Ibrahim Khan Lodi, the last Sultan of the Delhi Sultanate ruled by the Lodi Dynasty since 1451, in this epic battle of conquest, fought exactly 75 years later! 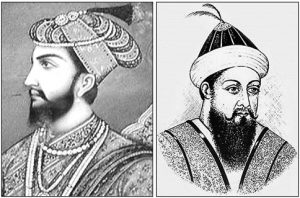 Causus Belli & Prelude To The Battle

Babur’s innate motivation to embark on expeditionary campaigns of conquest is not surprising, since the Turkic Conqueror was a descendant of the great Genghis Khan, Emperor and founder of the Mongol Empire and Timur, the founder of the Timurid Empire in and around Afghanistan, Iran and Central Asia!

Babur was catapulted into statecraft in 1494, at the tender age of twelve because of the accidental demise of his father, Umar Shaikh Mirza II, ruler of the Fergana Valley and fourth son of Abu Sa’id Mirza, the Emperor of the Timurid Empire. With an inborn thirst for conquest, Babur embarked on series of campaigns which resulted in many victories, but also a substantial number of defeats. After a series of such swinging fortunes, Babur turned his attention Southwards, towards the Indian Subcontinent.

Babur, along with reinforcements from the Ottoman Empire (in modern-day Turkey) and from the Mongols, reached the banks of the Chenab River in 1519, with the sole aim of conquering Punjab, in honour of Emperor Timur, who held sway over this region during his reign. Babur continued this tour of duty till 1524. His attention was drawn to the lands of the Delhi Sultanate when he received invitations from Daulat Khan Lodi, the Governor of Punjab and Ibrahim Lodi’s own Uncle, Ala-Ud-Din, thus unambiguously indicating a sure sign of the weakening of the Lodi Dynasty! Babur’s attempts at claiming right to the Emperorship of the Delhi Sultanate, however met with scant response, with the detainment of his emissary by Ibrahim Lodi.

In response, Babur marched towards Lahore in 1524, but found to his astonishment that Daulat Khan Lodi had been driven out by Ibrahim Lodi’s forces. Babur then proceeded to sack Lahore, which only increased Ibrahim Lodi’s indignation. The Mughal King then marched onto Depalpur, a city in the Okara District, approximately 150 Km Southwest of Lahore and the largest tehsil in modern-day Pakistan. Here Babur appointed Alam Khan, another of Ibrahim Lodi’s defecting Uncles as the Governor. However, Alam Khan was soon overthrown and fled the city. Babur proceeded to reinforce Alam Khan’s entourage and the latter, along with Daulat Khan Lodi and approximately 30,000 troops, laid siege to Ibrahim Lodi at Delhi, on Babur’s instigation. This contingent met with a similar fate at the hands of Ibrahim Lodi’s forces, leading Babur to realise that he would need to deal with Ibrahim Lodi’s forces himself, lest the Delhi Sultanate proved to be a serious impediment to his ambitions of an Indian conquest. 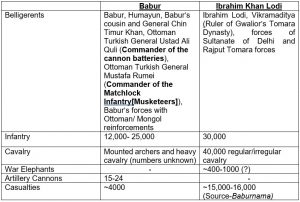 Babur marched towards Delhi via Sirhind. His astute military mind understood that besieging Delhi’s ramparts or fighting within its confines would prove advantageous to Ibrahim Lodi. Babur thus chose the open plains of Panipat, approximately 95 Km North of Delhi. With covert feelers, Babur indicated this intention to the Delhi Sultanate and due to his smaller and more nimble force, could reach Panipat a few days ahead of Ibrahim Lodi. This gave Babur the vital headstart he needed to prepare the battlefield to his advantage.

Babur aligned his forces with their right flank against the City of Panipat. The River Yamuna flanked Babur’s forces on the left, where he dug rows of trenches and felled trees that would act as bulwarks against his left flank. In Babur’s appreciation, his strengthened flanks would discourage Ibrahim Lodi from trying to outflank him and would force Lodi to attack Babur’s forces head-on. Alternatively, Babur appreciated that Lodi would have to use excessive force to overcome his flanks.

Babur first secured his flanks as mentioned and then employed the Ottoman tactic called the Araba, in which he placed his artillery cannons in the centre of his battle formation, along with some 700 overturned ox-carts joined together with ropes, thus making a continuous unbroken chain in the middle, with wooden breastworks between carts from where his musketeers could engage the enemy. The breastworks also acted as protection for the Artillery.  The interlocking ropes could also be lowered at pre-selected places to enable the cavalry to charge through. The heavy cavalry made up his front ranks, bulwarked against the wagons. Babur’s skilled Mongol mounted archers, a legacy owed to his Chagatai (Mongol) roots from his mother’s side, were deployed on his wings to quickly outflank the enemy when ordered to. Incidentally, the Mongol horsemen, the most skilled mounted warriors in history, used a composite recurved bow made of bone, wood and muscle sinew, with a drawing force greater than 150 pounds, which they could fire with deadly accuracy, standing in their stirrups at full gallop, to a range of 300 yards!

In order to cater for Lodi’s numerically superior Army, Babur also employed the Tulughma– a tactic familiar to the Central Asian Armies. The Tulughma involved placing ranks of infantry at regular intervals, with heavily armed infantry and heavy cavalry making up the front ranks. The rear ranks consisted of light infantry and light cavalry. When battle is joined, some of the light cavalry encircles the flanks of the enemy, as the heavily armed front ranks close in. As the enemy gets boxed in, the rest of the rear ranks move through the gaps in the front ranks and overwhelm the enemy with arrows, projectiles and close-quarter fighting. Once the adversary is in disarray, the heavily armed front ranks would move in to decimate the remaining enemy.

Of course, for Babur’s Tulughma  to succeed, it was imperative that Lodi attacked him first. Babur sent out raiding parties to continuously harass Ibrahim Lodi’s camp. Ibrahim Lodi lacked the battle cunning of Babur and had always relied on overwhelming force to win his battles. He also placed great reliance on his war elephants, which were capable of striking fear into his previous adversaries. Lodi, therefore, fell into Babur’s trap and advanced with his numerically superior Army to meet Babur’s battle formation on the fields outside Panipat. Lodi found the frontage of Babur’s battle formation too narrow and tried to quickly reorganise his advancing Army into a more compact formation. Seizing this opportunity, Babur unleashed his flanking cavalry. Driven by Babur’s swift and agile horsemen towards the centre of Babur’s Araba, Lodi’s war elephants were met with cannon-shot from Babur’s Artillery, causing most of them to become startled and run amok. The Mongol horsemen then rained deadly arrows down on them and their handlers. Once the enemy ranks had become disorganised, the heavy cavalry moved in and decimated them, causing many to flee. It is also believed that at this time, a sizable number of Lodi’s soldiers defected to Babur’s ranks.  The confusion in Lodi’s ranks prevailed through the day, till at last, Lodi was left solitary, wounded and surrounded. He attempted to hastily retreat, during which manoeuvre he was killed, resulting in defeat for the Delhi Sultanate at the First Battle of Panipat, which lasted less than half a day!

The defeat of the Lodi Army decimated the Lodi Dynasty’s forces, causing the Sultanate to capitulate. Immediately after the battle, Babur proceeded to occupy Delhi 72 hours later. Babur then reached Agra, Sikander Lodi’s capital city, on 04 May 1526 and occupied it thereafter.

Post the First battle of Panipat, Babur’s main concern was that he had to resort to coercion to influence his troops to stay on, whence a sizable number wanted to avoid the oppressive weather and hostile neighbourhood and return back to their homeland, as his ancestor Timur had done. Babur’s advances into the Indian sub-continent also caused him to incur the animosity of the Afghan chieftains along the River Ganges, rulers of Malwa and Gujarat and Rana Sanga of Mewar, who unified the Rajput clans against Babur in the Battle of Khanwa (60 Km West of Agra) a year later on 16 March 1527, wherein Babur again prevailed.

The fall of Delhi was the primer for the establishment of the Mughal Empire in India, which, after Babur’s death in 1530, was helmed by his son Humayun and his son Akbar thereafter, with the Mughal Empire reaching its pinnacle under the latter. The Mughals would continue to rule the Indian subcontinent till they were dethroned by the British Raj shortly after the Sepoy Mutiny in 1857, when the last Emperor, Bahadur Shah II, was exiled to Burma for his role in the Mutiny.

Critical to his success were apt battle tactics employed by Babur, which significantly offset the numerical superiority of Lodi’s forces. These included:-

Babur’s victory in the First Battle of Panipat established the advantage of employment of apt tactics and novel techniques based on a keen analysis of enemy strengths and weaknesses over simple numerical superiority. The use of cannon Artillery by Babur for the first time in the Indian Subcontinent forever changed the way battles would be fought. Battle became a conflict of the mind rather than a simple clash of numbers.

Jul 29, 2022
Sir, I understood what you are trying to convey, but my point is many people believe that Rana Sanga invited Babur which is completely false.

Jul 29, 2022
Dear Soumyadipta, Rana Sanga was a Warrior king of exceptional grit and drive. As alluded to in the, article, it was his persona that succeeded in uniting the Rajput clans against Babur.