Drones In The Russia-Ukraine War 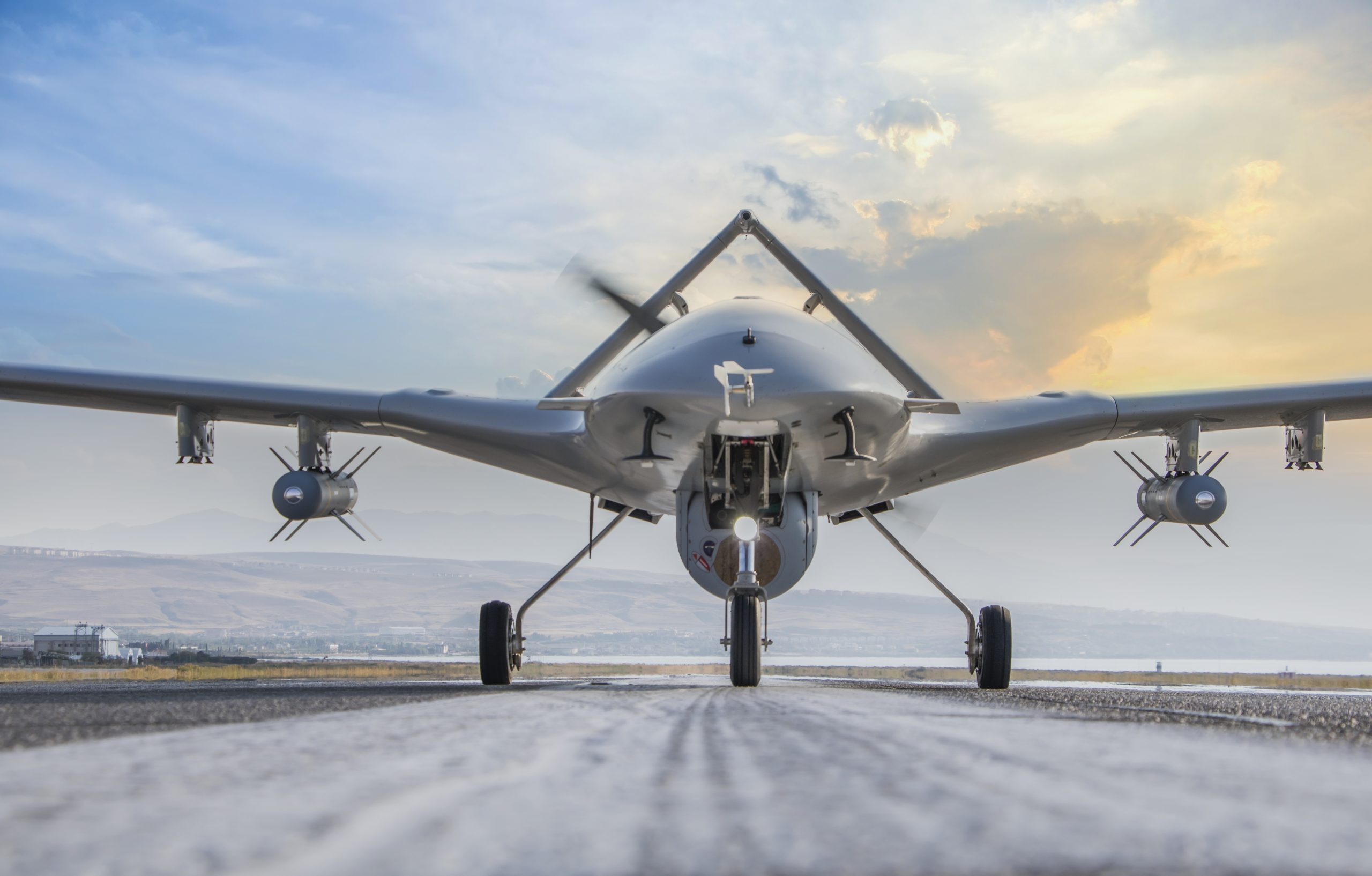 The world is now familiar with the purported video grab and statement issued by the Ministry of Defence of the Russian Federation, claiming the destruction of a Ukrainian Ground Force (UGF) multiple launcher rocket system (MLRS) vehicle by a precision strike from a drone of the Russian Air Force.

A second video of 20/21 March claims a precision strike on a UGF mobile Air Defence (AD) Missile launcher (ML), after being tracked from its firing position to its ‘hide’ in an abandoned urban building. 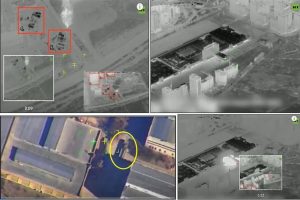 Another article from the early stages of the war describes the destruction of a Russian convoy by the Bayraktar TB2 Unmanned Aerial Vehicle (UAV), as claimed by the Ukrainian Air Force.  These are the same drones that the Azerbaijani forces used effectively in the 2020 Nagorno-Karabakh conflict. 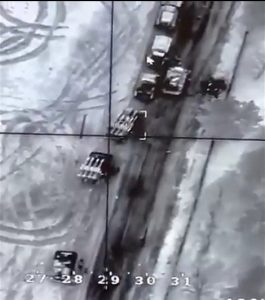 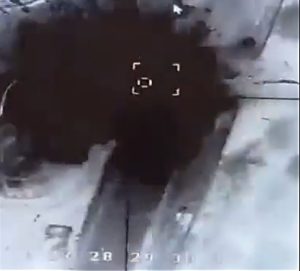 While the veracity of these strikes as also drone casualties during the Russia-Ukraine War (RUW) are limited to open-source inputs with sometimes widely varying figures, what is starkly evident is the intensive use of UAVs (‘Drones’) by both sides to carry out Intelligence/Surveillance/Reconnaissance (ISR), target designation, Direction of Artillery Fire (DOOAF) and precision strike functions against adversary assets.

Russia’s UAVs in the RUW

The Israeli Hermes-450 medium-altitude-long-endurance (MALE) UAV was effectively used by Georgia for ISR against Russian Forces in 2008, during what is widely termed as the ‘first drone war’, in which Russia’s employment of outdated domestic drones was outdone. The revelation of employment of drones as force-multipliers in the Georgian conflict, in Libya/Syria/Nagorno Karabakh and in the ongoing Ukraine conflict since 2014, have catalysed Russian UAV development. UAVs are operated both by Russian Ground and Aerospace Forces, which have since then achieved significant expertise in their operation.

Traditionally used for ISR, most Russian drones have been catapult / hand-launched, tactical mini/micro-UAVs, which are easy to handle and difficult to spot during operations. Russia has also added heavier UAVs and even Unmanned Combat Aerial Vehicles (UCAVs) to their arsenal during the RUW. These machines are typically operated by ‘Drone Companies’ within Motor Rifle Brigades (read more @ https://chanakyaforum.com/military-contours-of-the-russo-ukraine-war/). The list of UAVs extensively used/appreciated to be employed so far in the RUW is by no means exhaustive and both sides have a larger number of variants in the inventory, which, like the Russian Katran UCAV, have not yet presented direct evidence of use.

Granat. This UAV is being used for ISR, target designation (TD), Battle Damage Assessment, communications-relay and Electronic Warfare (EW) functions. It is equipped with a geographical information system (GIS) and digital maps to accurately locate UGF elements for subsequent engagement.

Eleron-3SV.  This UAV is designed for ISR, TD and communications-relay and is capable of autonomous/radio-controlled flight. It can be configured to automatically return to its launch location- a vital capability in case of loss of command data-link. Jamming by UGF have resulted in three drones being captured. 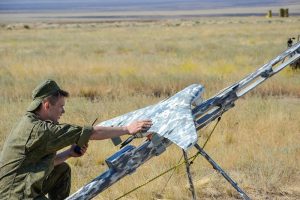 Zala-421. On 14 March, a Zala (KYB/KUB) UAV was shot down by Ukrainian forces in the vicinity of Kyiv, indicating Russia’s transition from pure ISR to combined ISR/target designation/kinetic-attack roles. The Zala mini-UAV is classified as a ‘kamikaze’ ‘loitering drone’ and can be mounted with different weapon payloads upto 3 Kg. It has an endurance of 30 minutes and a top speed of 120 Kmph. Four of these UAVs have reportedly been destroyed by UGF in the ongoing conflict. 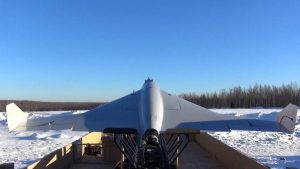 Orlan-10.  The Orlan-10 is a small, tactical UAV for ISR, with a range of 120 km (600 Km in autonomous mode), endurance of 16 hours and cruising speed of 90-150 Kmph. It is the most numerous UAV in the Russian arsenal.  The Orlan-10 system can control four drones simultaneously. The UGF have successfully jammed a number of these drones with the Trytel Nota electronic countermeasure (ECM) system. However, there are also reports that the upgraded Orlan-10 UAVs are more impervious to ECM. The Iskander missile strike on an abandoned urban building mentioned above was cued by an Orlan-10 drone. However, this is not without attrition, with five drones downed and two captured by the UGF. 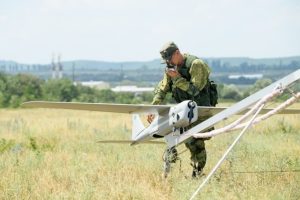 Takhion.  This is a mini-UAV developed for ISR missions, with a range of 40 Km. The drone has all-weather capability and has seen operational employment in Donbas. It has been integrated with the 152 mm 2A65 Msta-B Howitzers for target acquisition and engagement. 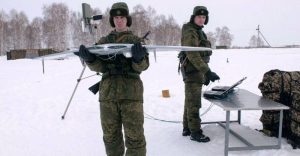 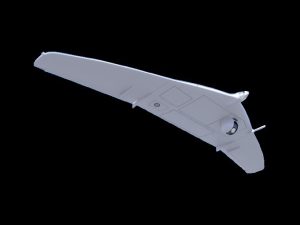 Zastava. This was the first UAV to provide evidence of Russia’s direct involvement in the ongoing separatist agitation in the Donbas Region, when, on 22 July 2015, Ukrainian border guards shot one down over the Luhansk People’s Republic. Originally the Bird-Eye 400 Mini-UAV manufactured under a 2012 contract with Israel, this UAV features low acoustic signature and has 80 minutes of endurance. It is capable of autonomous operation. 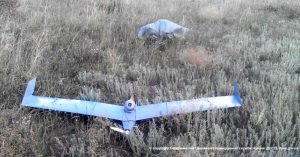 E95M Target Drone. The capture of an E95M by UGF has suggested its employment as bait to lure UGF into revealing locations of their AD systems. The drone has a flight ceiling of 3 Km, operating range of 50 Km and endurance of 30 minutes. 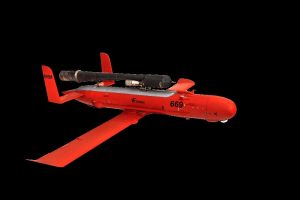 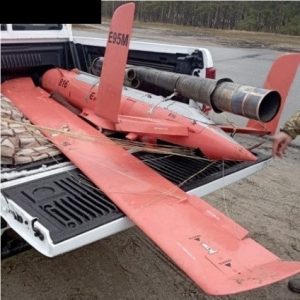 Forpost-R.   This UCAV is the Russian-produced version of the Israeli Searcher Mark-II ISR UAV. The UCAV has a range of 450 Km, flight ceiling of 6 Km and endurance of 18 hours. It weighs 500 Kg and can carry a 120 Kg payload, including missiles/bombs. It is thought to be typically mounted with the Kornet-D Russian anti-tank-guided-missile (ATGM) that can be fitted with either Tandem-HEAT or thermobaric warheads, with a range of 8-10 Km. A video grab from Russian MoD shows a Forpost-R armed with two ATGMs taking off for a mission in which it destroyed a UGF MLRS. One ISR version drone was reportedly destroyed by UGF on 11 March. 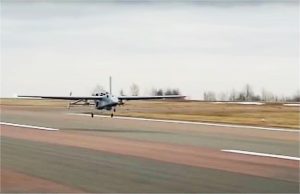 Orion. In video footage released by the Russian Defence Ministry on 04 March, this UCAV, which is compared to the US MQ-1 Predator, can be seen destroying a UGF Command Post in the Donbas Region.  It is a MALE drone with a max take-off weight of 100 Kg, flight ceiling of 7.5 Km and endurance of 24 hours. The UCAV has been in operational employment since Syria in 2015 and can carry four guided bombs/guided missiles. 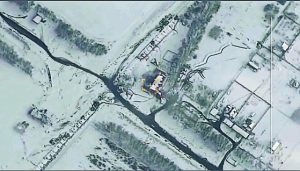 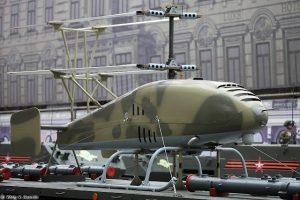 Ukraine’s UAVs in the RUW

While both Ukrainian Air Force and Ukrainian Ground Forces (UGF) operate UAVs, the  UGF operates the Aerorozvidka, a specialist Aerial Reconnaissance Unit which has recently been at the forefront of the ‘drone-war’ for Ukraine, carrying out extensive ISR operations and precision strikes on static/moving Russian targets. The effectiveness of Ukrainian drones in precision strikes can be partly attributed to internet access granted via the Starlink satellite network belonging to US entrepreneur Elon Musk’s SpaceX company.

Like Russia, Ukraine’s drones also predominantly feature the mini-UAV class and are a mix of commercial, indigenous and ex-import machines, with further consignments of the Israeli Bayraktar TB-2 UCAV and now the US Switchblade drones making their way into the Ukrainian Armed Forces (UAF) inventory. The UAVs in use in the RUW are enumerated below.

Bayraktar TB2. Apart from the approximate number of 50 drones already in the UAF inventory at the start of the RUW, the Ukrainian Defence Minister stated on 02 March that further consignments of the UCAV had been received as part of international military assistance. Canada has also pledged funding for equipping the UCAV with  WesCam surveillance cameras, ideally suited for medium-altitude ISR. The UCAV is arguably the most potent drone in the RUW and has been profiled @ https://chanakyaforum.com/military-contours-of-the-russo-ukraine-war/. Russia claims to have destroyed six or more UAVs. 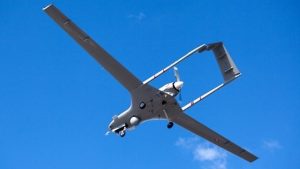 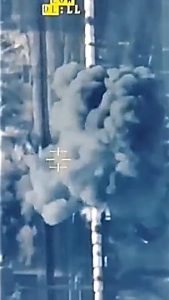 Bayraktar UCAV, Video Grab of Destruction of a Russian Fuel-Train:Source-firstpost.com

Tu-141.  While this Soviet-era ISR UAV was retired in 1989, some have now been refurbished by the UAF. It has an operational range of 100 Km, flight ceiling of 6 Km, max take-off weight of 6215 Kg and a top speed of 1100 Kmph.  The UAV’s performance resembles a cruise missile, being rocket-launched from a trailer and flying a predetermined path for ISR, before being recovered via parachute for re-use. The UAF have so far lost four UAVs to Russian action. 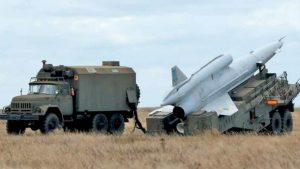 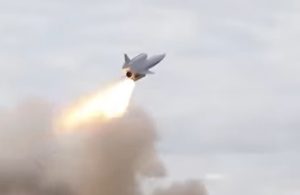 A1-CM Furia. This is an indigenous mini-UAV developed in Ukraine for ISR and DOOAF and is one of the smallest drones in the RUW. It has an operational range of 50 Km, cruise speed of 65 Kmph, endurance of 3 hours and max take-off weight of 5.5 Kg. It is catapult-launched and parachute-recovered. UAF have presently lost one UAV to enemy action. 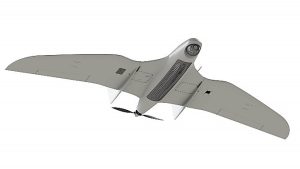 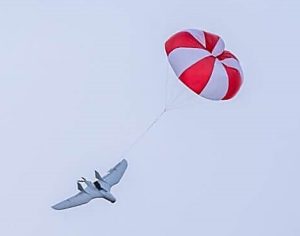 UJ-22.  This is also a mini-UAV used for ISR. It has a controlled/autonomous range of 100/800 Km, cruise speed of 120 Kmph and endurance of 7 hours. The UJ-22 can also carry a UJ-31 Zlyva loitering munition (kamikaze-drone) for destruction of static targets. One UJ-22 was shot down by Russian forces on 24 March in Russia’s Bryansk Region.

Leleka-100.   This is one of the most commonly used indigenous Ukrainian mini-UAVs and is employed for ISR and DOOAF. It has been in operational service with the UAF since 2015. It is capable of radio-controlled/autonomous flight with auto-return capability. It has an operational range of 50 Km, flight ceiling of 1500m, cruise speed of 60-70 Kmph, endurance of 2.5 hours and max take-off weight of 5.5 Kg. Two UAVs have so far been captured by Russian forces, probably with the help of counter-UAS systems. 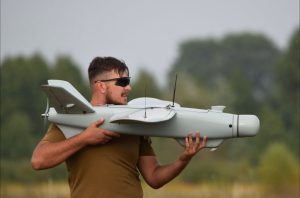 Punisher.   This is a mini-UCAV that has been used by the UAF with telling effect in the RUW, with over 60 successful flights. It carries out autonomous flight based on pre-fed coordinates and has an operational range of approximately 50 km, at a cruising altitude of 400m. The Punisher works in tandem with the Spectre ISR UAV, which detects and identifies stationary targets for engagement by the former, with 2.7 Kg worth of explosive payload, delivered together or on different targets. 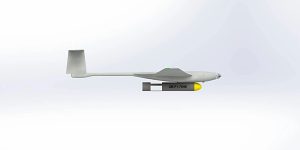 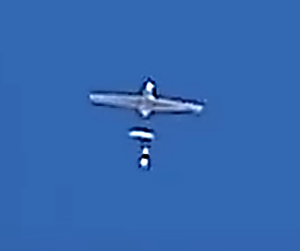 PD-2.  This is another indigenous Ukrainian UAV used for ISR, DOOAF and cargo support operations, with a cargo payload of 8 Kg and auto-return capability. It has a flight ceiling of 5 Km, cruise speed of 100 Kmph, endurance of 10 hours and max take-off weight of 55 Kg. Teaming of UAVs can be resorted to for persistent ISR over a designated area. It can use line-of-sight communications or SATCOM.

R 18.  The R 18 mini- Armed Drone is the workhorse of the Aerorozvidka . It has an endurance of 40 minutes and a range of about 4 Km. It is also used for ISR and DOOAF. This UAV can carry payloads of up to 10 pounds, including the RKG-1600 handheld shaped-charge grenade.

Switchblade. 100 US Switchblade ‘kamikaze’ mini-drones are part of the military support items within the US$ 800 Million support package for Ukraine. The Switchblade-300 drones weigh 2.5 Kg, with an endurance of 15 minutes, range of 10 Km, cruising speed of 100 Kmph and are designed for anti-personnel strikes. The larger Switchblade-600 drones weigh 23 Kg with a cruising speed of 122 Kmph, range of 40 Km, endurance of 40 minutes and are designed for anti-personnel/anti-tank strikes. 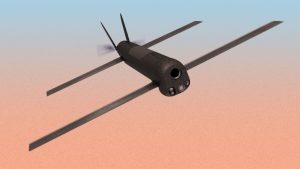 The RUW, like the Nagorno-Karabakh conflict, has underlined the paradigm shift in warfare characterised by extensive use of drones for ISR, strike and combat support operations. While the present employment profile is restricted to positive identification of various drone types, the successes enjoyed by both sides are sure to catalyse increased bilateral use of unmanned aerial systems as a mainstay to prosecute operations.