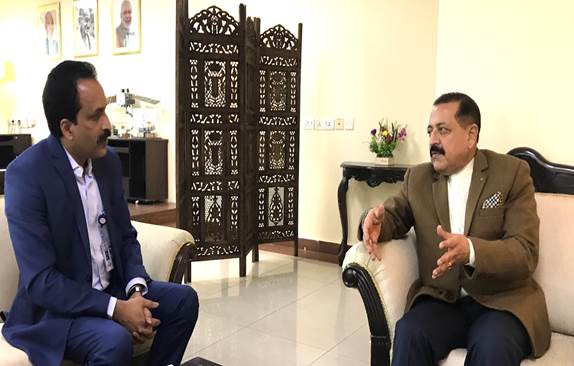 Dr S. Somanath, who has taken over as the new Chairman of Indian Space Research Organisation (ISRO) called on Union Minister of State (Independent Charge) Science & Technology; Minister of State (Independent Charge) Earth Sciences; MoS PMO, Personnel, Public Grievances, Pensions, Atomic Energy and Space, Dr Jitendra Singh and discussed the status of “Gaganyaan” as well as other Space missions lined up for the near future.

While conveying his best wishes to the new ISRO Chief, Dr Jitendra Singh said that Dr. Somanath was taking over the prestigious assignment at a very eventful time and destiny had blessed him to lead ISRO through some of the most historic missions including India’s first Human Space Mission “Gaganyaan”.

Dr Jitendra Singh said that under Prime Minister Narendra Modi, Space programmes have been given a special impetus and Space technology has now been made applicable in different sectors including roads and highways, railways, healthcare, agriculture, etc. He said, during the next few years, India’s ascent to the top will be heralded via the Space route.

The Minister was also informed that the Indian Astronauts have successfully undergone Generic Space Flight Training in Russia. A dedicated ad-hoc astronaut training centre has also been established at Bengaluru for Gaganyan specific training.

The preparations for the Human Mission, said the ISRO Chief, involve in-flight demonstration of Crew Escape System functioning in lower atmosphere (less than 10 Kms). The exercise recovery of the crew module after impacting in Sea is also being worked out.

In 2022, ISRO also has the distinction of launching GSAT-21, the first fully funded satellite of NSIL (New Space India Limited) and will be owned as well as operated by NSIL. This Communication Satellite will meet the DTH (Direct to Home) application needs.

ISRO Chairman presented at brief about the forthcoming missions during the next three months. He mentioned a RICAT-1A PSLV C5-2 scheduled for February 2022, OCEANSAT-3, INS 2B ANAND PSLV C-53 to be launched in March 2022 and SSLV-D1 Micro SAT in April 2022.