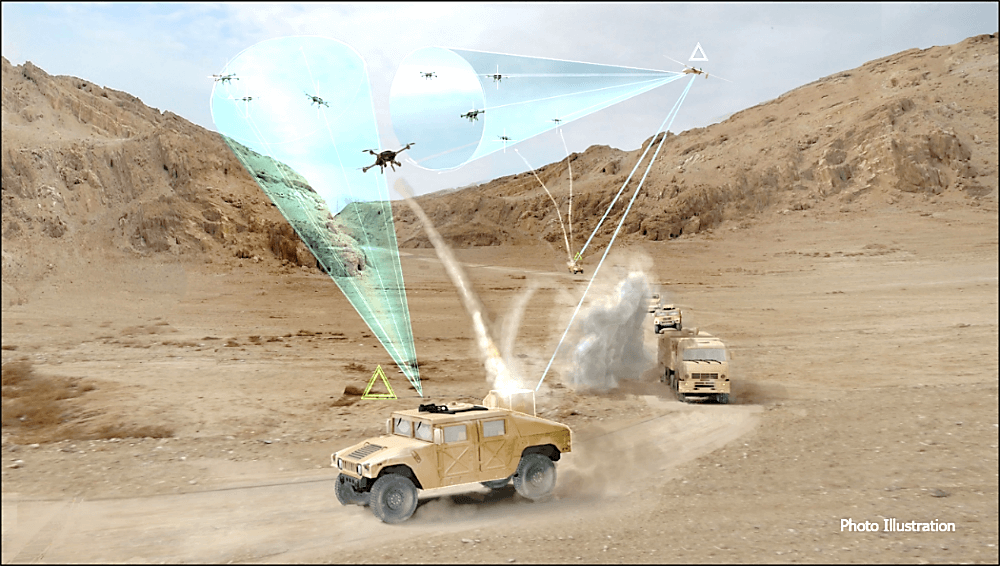 The drone attack on Jammu Air Force station on 27 June should not have caught the Indian security establishment unawares, but it actually did. The looming danger of employing this low cost option by adversaries as well as non – State actors became a reality with this attack, though there are always pointers towards such imminent threats. The 14 September 2019  drone swarm attack on the Saudi Aramco Oil Refinery in Eastern Saudi Arabia by Yemeni Houthi rebels made the world sit up and take notice of this real and present danger. These are not isolated instances and there are numerous examples of drones being used against civil as well as military targets in the past two years, with some of them enumerated below:-

It is evident that the use of armed drones to cause casualties to personnel and materials is on the rise- not only against State/ military targets, but also for use in theft and with other anti-social aims. For such an unobtrusive yet ubiquitous threat, the real challenge lies in finding holistic fail- proof solutions that detect, identify and warn the deployed  counter drone measures to neutralise multiple targets in all weather, terrain and visibility conditions. Such complete start- to- finish systems are the need of the day in the counter- drone effort.

What are India’s Efforts at Building Counter- Drone Capability?

India’s Defence Research and Development Organisation (DRDO) had fielded a short range counter drone system, the D-4 Drone System on the occasion of Republic Day 2021 for VVIP security. The same has been briefly explained in an article in Weapon Platforms @Chanakya Forum(https://chanakyaforum.com/directed-energy-weapons1).  As per DRDO, this system reportedly comprises a radar system that offers 360º coverage for detection of micro drones when they are  4 km away. Electro-optical/infrared (EO/IR) sensors can detect drones up to 2 km away. A radio frequency (RF) detector can detect RF communications up to 3 km away. While such sub systems are desirable in any counter drone solution, there is a requirement for a dedicated Command & Control (C2) System to carry out tasks of sensor fusion, collation, decision support as well as order engagement over a geographical area against multiple aggressors, which has yet to be demonstrated. In a high-level meeting chaired by Prime Minister Narendra Modi on 29 June 21 in the wake of the drone attacks in Jammu on 27 June, such strategies to counter ‘weaponised drones’ were discussed.

While DRDO and some indigenous private companies are working on developing these concepts, such systems have yet to be fielded in totality. Even at the global level, while a number of firms manufacture individual subsystems, leaders in manufacture of holistic counter- drone systems (CDS) number but a handful. Leonardo, an Italian company with footprints in US and UK among other countries, who are frontrunners in Aerospace, Defence and Security, offer Falcon Shield, a holistic and relevant solution to the counter- drone effort. 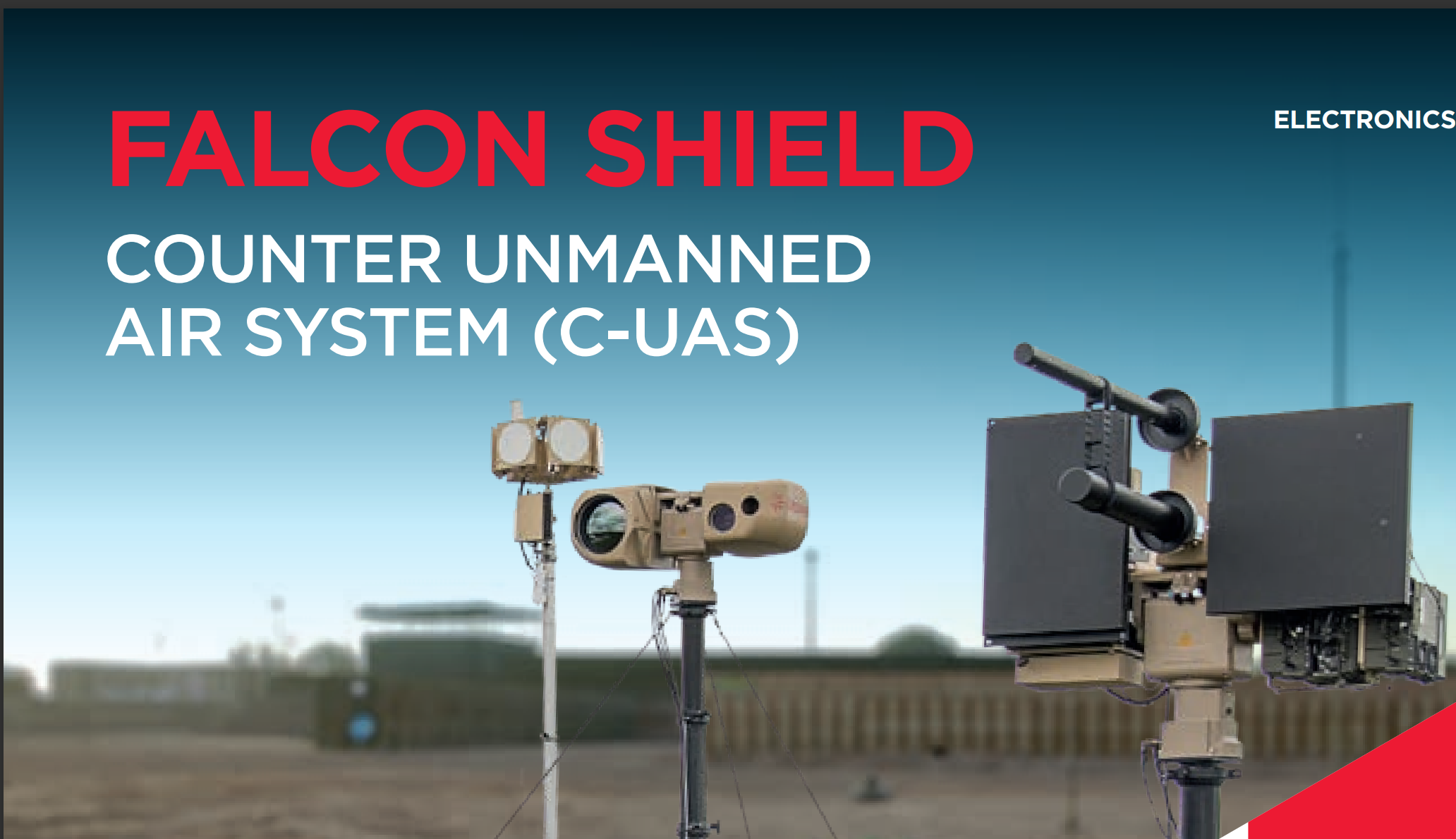 Falcon Shield is a rapidly deployable CDS which provides a holistic DTID (Detect, Track,  Identify and Defeat) solution to users with  detection and mitigation capability through a multi-layered response including electronic attack (EA). This response includes capability to take control of a drone and land it safely (a command-link control intervention capability) prior to the need to defeat it by jamming or kinetic solutions. Consequently, the potential for undesired collateral effects is greatly minimised.  The Falcon Shield is modular, scalable and centred around its open architecture C2 nucleus, offering the flexibility to augment the basic architecture with a large number of customer specified peripheral sub systems or components. This enables the Falcon Shield CDS to be tailored and optimised to meet the demands of varied locations, threats and user concepts of operation. The capabilities of Falcon Shield are only representative of any robust holistic counter drone system that would meet today’s drone threat mitigation needs. 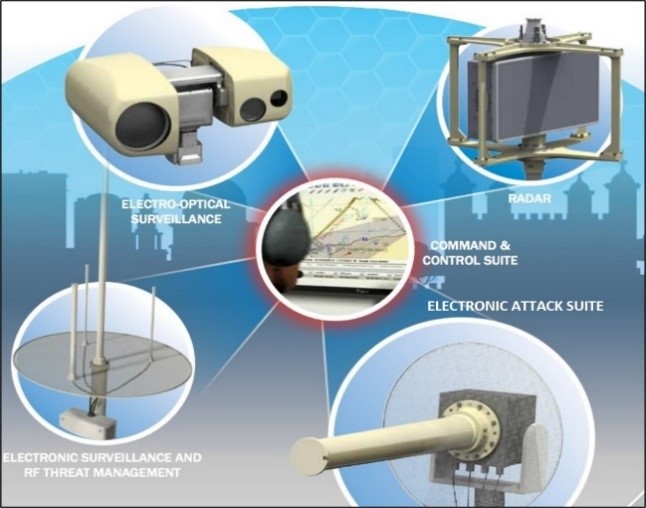 The system was developed in 2015 and has been operationally proven with deployment in the Italian Armed forces and by the Royal Air Force in UK for London airports post the drone intrusion incidents mentioned in the beginning of this article. The system provides flexibility of response in providing kinetic/ soft kill, commandeering or alert response options. Such flexibility of options allows the system to operate without hindrance in an operational as well as a peacetime environment, where property infringement issues could mean that a ‘drone- kill ‘ option may not be the best solution, especially in absence of reliable intelligence regarding intent.  The CDS is configurable as a fixed, relocatable or deployable system, thus adding flexibility and enhancing deployment options.

C2.   The C2 core of the Falcon Shield CDS is capable of receiving, processing, collating and presenting fused inputs from various sensors to build a cogent picture of the threat. This is verified against an existing database for quick decision making with regards to severity of threat and method of mitigation. Such decision making can also be automated with the help of algorithms, thus vastly reducing response time. The C2 software can geo- locate the drone(s) using Direction Finding (DF) and auto cue the sensors onto the drone(s) in real- time. The electronic surveillance measures (ESM) can  identify the EM bandwidth/ spoof the GPS signal of the drone, thus generating the option of commandeering or soft kill by precision electronic attack (EA). While detecting the presence of an enemy drone is important, the C2 core is also able to confirm a drone- free environment, in order to enable normal activities to resume. The C2 core thus  provides a modular integrated framework and intuitive user interface which enables comprehensive monitoring/ collation of the prevailing drone threat environment. 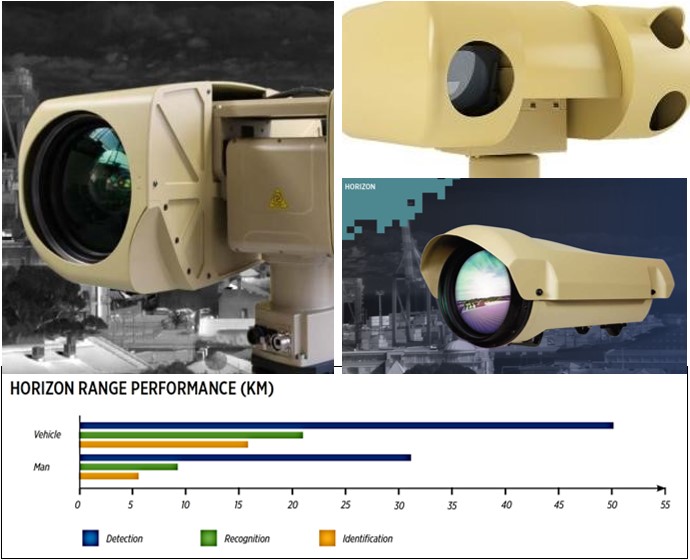 Effectors.    Due to  Falcon Shield’s inherent flexibility, the means for terminal action can include hard/ soft kill means. Based on the knowledge of physical location of the target drone and the EM band in which it is operating as obtained by the sensors, the drone is subjected either to system provided precision EA or hard kill, depending on user’s choice of effectors.

The juggernaut of drone based attacks by hostile Nations and non – State actors is destined to increase in terms of techniques and volume, even in the short term future. There is therefore an imperative requirement to develop, field and share holistic counter drone technologies that will allow user countries to be able to detect, thwart or mitigate such inimical threats and in doing so, work towards achieving the ultimate aim of immunity to such unobtrusive means of hostility and aggression. India thus needs to develop/ acquire such holistic capability on a war footing to beat this emergent threat, either through indigenous development/ production or by means of a Strategic Partnership with identified foreign firms offering holistic systems as above, thus giving furtherance to own ‘Make In India’ theme.