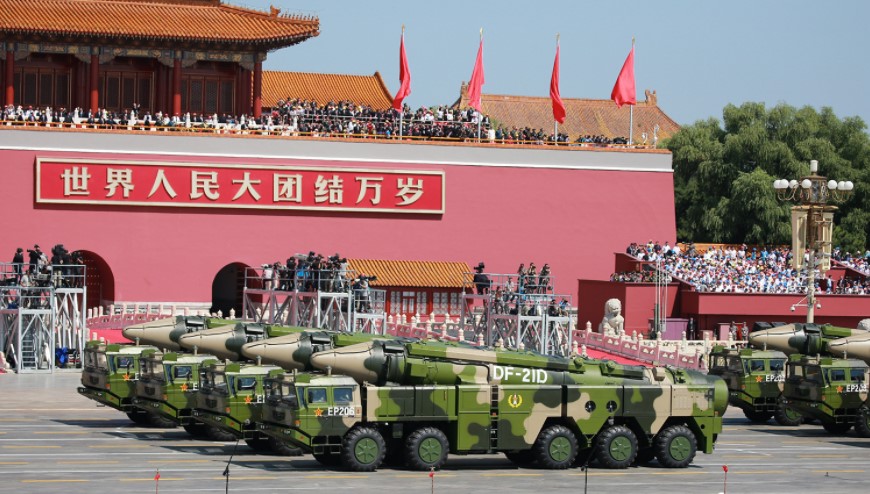 by Team Chanakya with inputs from ANI

President Xi Jinping, during the inauguration of the PLA Rocket Force and the PLA Strategic Support Force in Beijing on December 31, 2015 said that PLA Rocket Force is China’s core strategic deterrence power. The PLA Rocket Force should strengthen the trustworthy and reliable nuclear deterrence and nuclear counter-attack capabilities, intensify the construction of medium and long range precision strike power, and reinforce the strategic check-and-balance capability, so as to build a powerful and modern Rocket Force. Xi also emphasized that the PLA Strategic Support Force is a new-type combat force to maintain national security and an important growth point of the PLA’s combat capabilities. The newly established strategic arms are to realize the Chinese Dream and the Dream of a Strong Military, and a strategic initiative to build a modern military power system with Chinese characteristics.

China has one of the most impressive inventories of missiles of any military. The PLARF’s missile systems, coupled with the PLA’s rapidly developing space and counter-space platforms, have become critical components of China’s emerging power projection capabilities. However, when it comes to ballistic missiles, there are indications that China is not the innovative and unstoppable force that it would like the rest of the world to think. The development of conventional short-range ballistic missiles (SRBMs), medium-range ballistic missiles (MRBMs), and land attack cruise missiles (LACMs), as well as its improving intercontinental ballistic missiles (ICBMs) means China must modify its strategy, and develop a wide range of additional command and control, and battle management capability.

Some of China’s newest or most lethal weapons are the DF-21D anti-ship ballistic missile, DF-26 intermediate-range ballistic missile and DF-41 intercontinental ballistic missile. The emergence of the DF-21D “carrier killer”, in particular, indicated the emphasis China was placing on ballistic missile development, as it is the only country in the world to field a weapon of this type. The growth in PLARF brigades accelerated, with some estimates putting the numbers jumping from 29 brigades in May 2017 to an estimated 40 by February 2020. The rate of tests is extremely high too, with the US Department of Defense’s 2020 report on the PLA noting, “In 2019, the People’s Republic of China launched more ballistic missiles for testing and training than the rest of the world combined.” However, for all Chinese propaganda efforts to hype up its military capabilities, there are certain organizational and technological limitations that are holding back the PLA’s development of new ballistic missiles.

Last week, the China Aerospace Studies Institute (CASI) – an Air University research institute based at Maxwell Air Force Base that supports the US defense community – released a report entitled China’s Ballistic Missile Industry. Its authors, Alex Stone and Peter Wood, examined some of the challenges that Chinese missile development faces. Interestingly, the two academics noted: “While the Chinese ballistic missile industry has significantly modernized over the past 20 years, the rapid tempo of testing there appears to have shown incremental and iterative progress rather than radical breakthroughs. Advancements touted by Chinese media remain primarily significant in a Chinese context, and, likely, China is actually falling behind its competitors in terms of overall rocket development.”

They continued, “We echo the conclusions of the 2005 RAND study in noting that the ballistic missile industry remains a mixed picture and it is clear that structural and technical limitations remain. China’s ongoing economic transformation will pose significant challenges for the manufacturing industry which is racing to improve automation but also facing talent attraction and retention problems. In the past two decades, multiple technical bottlenecks appear to have held up the development of new systems until the acquisition of foreign technology allowed a breakthrough.”

There is no doubt that China has prioritized development of the PLARF, particularly since 2000. This was reflected in the 2015 restructuring that saw the Second Artillery Corps upgraded to a full service as the PLARF alongside the army, navy and air force. Currently and in the near term, China is focused on improving its nuclear-deterrent and long-range strike capabilities, which will result in more mobile  missiles. Chinese missiles are becoming more accurate, with a circular error probable of less than 5m. Public assessments suggest strategic missiles are now 300% and tactical missiles are 500% more accurate than they were in the early 2000s. The full deployment of China’s BeiDou global navigation system has contributed to this.

The CASI report pointed out, “While the structure of the industry supporting that expansion has been rearranged, it remains largely the same as even 40 years ago. Multiple rounds of reorganization have consolidated ‘silos of expertise’, and greater consolidation is likely. From a technical standpoint, there is a clear trend of steady improvements. Superior design tools and manufacturing techniques that were less available through the mid-2010s appear to have been more thoroughly adopted in the past five years. Since the early 2010s, the size of manufacturing facilities has expanded and the techniques needed to produce large-scale rocket bodies or solid-rocket motors appear to have made breakthroughs.”

CASC is China’s sole supplier of ICBMs and Long March-series space launch vehicles, plus it develops, produces and tests some tactical missiles and other weapon systems, as well as R&D and production of satellites, space stations and the like. On the other hand, CASIC focuses mainly on tactical missiles, plus it has comprehensive R&D and production systems for surface-to-air missiles, cruise missiles, tactical ballistic missiles and solid-fuel launch vehicles.

These all trace their lineage back to research sub-academies established by China in the 1950s. Organizational changes in the 2000s seemingly created two academies to compete with CASC’s 1st Academy and CASIC’s 4th Academy, but the report observed that the competition is “lopsided”, extending only to short-range and submarine-launched ballistic missiles. Stone and Wood assessed, “It is difficult to say whether these academies can effectively compete with each other under this managed and controlled competition environment. Additionally, these repeated reorganizations and consolidations have imposed switching costs.”

The report noted: “A repeated theme throughout the 20 years (2000-20) covered in this report is the effort to gain efficiency and reduce waste through consolidation of the various components of the industry. This includes not only the creation of CASC and CASIC in July 1999, but repeated rounds of consolidation of factories and research institutes dedicated to the development of key subsystems. At the same time, the outcome of the decision in 1999 to divide China’s five defense corporations into ten companies is steadily being reversed in other defense sectors, and CASC and CASIC have pledged to deepen strategic cooperation and all domain deep integration.”

China inadvertently made huge errors in some restructuring, and it latterly reversed some former subdivisions. For example, it re-merged the Aviation Industry Corporation of China (AVIC) in 2008, and then in 2019 it folded the China Shipbuilding Industry Corporation into the China State Shipbuilding Corporation. Additionally, China has been implementing what it calls military-civil fusion, whereby defense industry can gain know-how and skills from the civil sector. However, despite this initiative, the PLA will remain heavily dependent on CASC and CASIC for R&D given the specialist nature of missiles and their core strategic status for the government. There have been “upstarts”, however. At Airshow China 2018, for example, Guangdong Hongda Mining showed a mock-up of an HD-1 supersonic cruise missile, a 290km-range weapon targeted at the export sector for precision land attack and anti-ship functions.

A spokesperson from the company told that the HD-1 ramjet-powered missile had been successfully test-fired from the ground in October 2018. Engine tests were performed in May, making a successful flight just four months later all the more remarkable. This raises the possibility that Guangdong Hongda Mining was receiving outside technical assistance. What are other challenges facing these R&D institutes? CASC and CASIC have added nearly 50% more workers since 2000. CASC jumped from 100,000 employees to 164,000 from 1999-2018. Similarly, CASIC grew from 1000,000 in 2002 to 150,000 by 2020. However, the industry in China continues to face major hurdles in recruiting and retaining top talent. Problems such as low pay, harsh work conditions and poor living conditions for scientists plague the sector, causing high staff turnover and outflow into the private sector. Enterprise management and smart manufacturing solutions have been adopted, but it is too early to say whether they have impacted efficiency and missile product development timelines.

Western countries have tightened up on research cooperation and the flow of dual-use technology into China. However, countries like Russia and Ukraine remain keen on cooperation. China also uses espionage to steal foreign technologies. The USA made arrests in 2011, 2016 and 2018 for the attempted illegal export of accelerometers and gyroscopes for spacecraft and missile navigation, for example. Chinese research and production facilities have been greatly expanded, as indicated by satellite imagery. The production of solid rocket motors and rocket bodies, especially, has greatly increased to support China’s burgeoning space launch sector. Indeed, the space sector, in which China is investing heavily and which actually falls under the command of the PLA despite governmental promises that China’s intentions in space are entirely peaceful and of a civilian nature, is having symbiotic benefits for the PLARF.

The CASI report noted, “As China seeks to further leverage civilian input to boost defense R&D capabilities under initiatives such as the military-civil fusion strategy, the missile sector appears to be engaged in closer collaboration through the signing of strategic cooperation agreements with universities and the private sector at large, especially with respect to dual-use technologies and research fields such as material science and engineering. But while Chinese media highlights adoption of computer-aided design, big data analysis and artificial intelligence, simulation testing and additive manufacturing, a closer examination reveals that oftentimes these developments represent long-overdue adoption of well-established practices.”

China is also an avid exporter of missiles. In term of ballistic missiles, it sold DF-3s to Saudi Arabia in 1986, the M-7/8610 to Iran in 1989, and the M-11 and M-9 to Pakistan in the early 1990s. As per the CASI report, in the past 30 years, China has focused more on attempts to export short-range ballistic missiles, perhaps to adhere to Missile Technology Control Regime strictures that allow sales of weapons with ranges less than 300km and warheads smaller than 500kg. Thus, for sale are missiles like CASC’s single-stage DF-12 and CASIC’s SY-400. Despite the challenges, “the overall increase in capability and production capacity may be sufficient for China’s defense needs going into the next decade and will continue to improve its overall conventional and nuclear capabilities,” according to Stone and Wood. The latest Annual Threat Assessment of the US Intelligence Community, released in April 2021, summarized that “the PLA Rocket Force’s highly accurate short-, medium- and intermediate-range conventional systems are capable of holding US and allied bases in the region at risk”.

The annual assessment also mentioned China’s nuclear arsenal, which is managed by the PLARF. “Beijing will continue the most rapid expansion and platform diversification of its nuclear arsenal in its history, intending to at least double the size of its nuclear stockpile during the next decade and to field a nuclear triad. Beijing is not interested in arms control agreements that restrict its modernization plans, and will not agree to substantive negotiations that lock in US or Russian nuclear advantages.” The USA further worriedly noted, “China is building a larger and increasingly capable nuclear missile force that is more survivable, more diverse and on higher alert than in the past, including nuclear missile systems designed to manage regional escalation and ensure an intercontinental second-strike capability.”