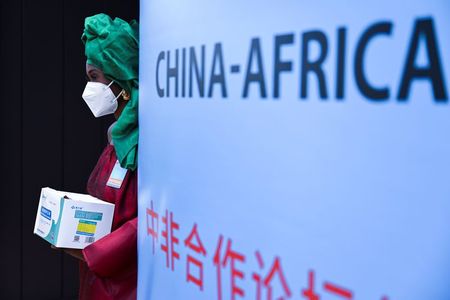 FOCAC was initiated in 2000 with a ministerial meeting in Beijing. Since then, it meets at ministerial level every three years alternating between Beijing and an African capital. For the first two editions 44 countries were represented, which rose to 49 in 2009. By the time of the 2018 summit all African countries except eSwatini have relations with China. During the FOCAC period 10 African countries were wooed away from Taiwan to China.
FOCAC was enunciated with the purpose of a strategic outreach to Africa using enhanced socio-economic cooperation with African countries. The important address by President Xi at the current FOCAC, hoped that the 8th Ministerial Conference of FOCAC, at the 65th anniversary of the first diplomatic relations between China and Africa, would continue to forge ‘unbreakable fraternity in the struggle against imperialism and colonialism.’

Xi emphasised that FOCAC was for creating a new matrix of international relations based on what he called the ‘everlasting spirit of China-Africa friendship and cooperation’. Mutual benefit, development and keeping up with the times with openness and inclusiveness were mentioned as the important aspects of China Africa relations.

The FOCAC 2021 is a follow up to the 2018 FOCAC Beijing summit. At that time, more African heads of state attended FOCAC than the number who attended the UNGA that year. The follow up mechanisms which have been in place since 2001 have been used. These are the Ministerial Conference currently taking place, which is held every three years. A senior officials follow up meeting and a senior officials preparatory meeting also took place. Normally, ministers in charge of foreign affairs and economic cooperation are invited to the ministerial meeting.

While the FOCAC ministerial meetings have been held since 2000, the summit was only introduced in 2006. It was held in 2015 and 2018. In June 2019, an ‘Extraordinary China-Africa Summit on Solidarity Against COVID-19’ was held with 13 African Heads of State.

Xi Jinping made four proposals which seemingly bring focus back to contemporary realities and concerns. First, to deal with COVID-19 in a cooperative manner. The intention is to put people first, guided by scientific evidence, ensure availability of affordable vaccines and support the waiver of intellectual property rights on such vaccines.

Secondly, the proposed practical cooperation aims to have new areas for cooperation including expansion of trade and investment. It will deal with poverty alleviation and enhanced cooperation on digital economy entrepreneurship by African youth, development of MSMEs and the like. The Global Development Initiative which Xi presented at the UNGA this year, was mentioned as being in consonance with an Africa’s Agenda 2063 as well as the SDGs. Xi invited African countries to be more active in participating in these initiatives.

Thirdly, the promotion of green development keeping in view the challenges of climate change, low carbon development and the development of renewable energy sources were mentioned. Xi supported the Paris Agreement. He did not mention this, but China has recently decided to stop promoting thermal coal-based power plants, which includes projects in Africa.

Fourthly, Xi promised to uphold equity and justice, basing this on a better multilateralism. Xi mentioned the common values of humanity which meet the aspirations of both China and Africa. Supporting the interest of developing countries, he opposed intervention in domestic affairs, discrimination and sanctions. This was a voice against what many African countries are individually mentioning in their current discourse.

The FOCAC 2021 presented the China-Africa cooperation Vision 2035 which would have rolling three-year plans. The first of these plans was presented at the meeting and nine programmes were focused upon. These are the public health programme, through which China would support achieving the goal of vaccinating 60% of Africa’s population by 2022. For this, China would provide a further 1 billion vaccine doses of which 600 million would be grants and 400 million doses would be provided through joint production by Chinese companies in Africa. The logistics of this will be challenging. Addis Ababa was the hub of Chinese vaccine distribution and with the deteriorating situation in Ethiopia this could be troublesome.

China will send 1500 public health experts to Africa and undertake 10 health related projects and 10 Poverty Reduction and agricultural projects for Africa and send 500 agricultural experts; the CSR of Chinese companies in Africa would be used to initiate “100 Companies in 1,000 Villages”.

Thirdly, they would be enhanced trade promotion programme which will open green corridors for African agricultural exports to China with easier inspection and quarantine procedures. There is a promise that reduced tariffs for LDCs would increase Chinese imports to reach $300 billion by 2024. $10 billion of trade finance to support such African exports were promised; the BRI would further develop industrial parks in Africa. Besides supporting 10 connectivity projects, a special group for economic cooperation with the Secretariat of the Africa Continental FTA is to be established.

Fourthly, the investment promotion programme will encourage Chinese businesses to invest at least $10 billion in Africa in the next three years. Employment creation projects with credit facilities of up to $10 billion to African financial institutions would be provided. China proposes to exempt African LDCs from debt which they may have in the form of interest free Chinese loans, which were due in 2021. China is ready to channelize to Africa $10 billion from its share of the IMF new allocation of Special Drawing Rights.

The digital innovation programme is the fifth under which 10 digital economy projects for Africa and satellite remote sensing applications, joint laboratories partnership with institutions and supporting innovation cooperation will be the focus. E-commerce platforms, tourism and a campaign to support 100 African stores with 1000 African products on Chinese e-commerce platforms will be undertaken.

The green development programme will provide 10 Green development and climate action projects for Africa. It would support the Great Green Wall, which Africa has been contemplating. Centres of excellence on low carbon development are proposed. This is a link to the capacity building programme where 10 schools in Africa would be supported and 10,000 African professionals would be invited for seminars. The Future of Africa vocational education programme will support capacity building training for African students in China. Chinese companies in Africa will be encouraged to create at least 800,000 African jobs.

The eighth project is for people to people exchanges by promoting tourism, cinema and youth exchanges. A China-Africa Women’s Forum is envisaged. The peace and security programme brings up the last of the nine programmes. 10 peace and security projects for Africa will be undertaken; military assistance to the AU will continue. Efforts to maintain regional security and for counterterrorism will be enhanced through training and joint exercises. Greater cooperation between Chinese and African peacekeeping troops is envisaged.

What is missing from FOCAC is the large announcement of billions of dollars of aid. $60 billion was announced at 2015 Johannesburg Summit. It had $5 billion in interest-free loans, $35 billion of preferential export credit, $5 billion for the China-Africa Development Fund and $5 billion for the Special Loan for the Development of African SMEs. $10 billion was for a China-Africa production capacity cooperation fund. These are not fully utilised. Since 2018, China has desisted from such big-ticket announcements, preferring to use the funds already allocated and through BRI.

A move from large scale loans to Africa to a capacity building and FDI led approach is being pursued. For several of the programmes, China is promising 10 projects each in Africa. This is like what India announced at the second India Africa Forum Summit in 2011. 80 new projects were announced then in multiples of 10. This allowed regional balance in project allocation and India was the first to recognise this approach. The Chinese have followed that model. The Chinese emphasis on capacity building, scholarships and youth is also following the Indian playbook, which was always focused on building African human resources.

Through FOCAC China has lowered its cost of engaging Africa and brought contemporary ideas of vaccine, climate and employment generation to the fore. It is reducing debt stress and calling on Africa for more determined support in the Chinese prism of multilateralism.