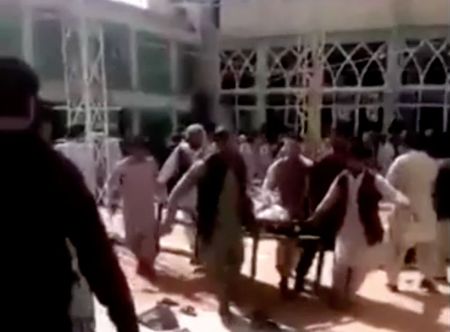 KABUL (Reuters) -An explosion hit a mosque just before Friday prayers in the Spin Ghar district of Nangarhar province in eastern Afghanistan, wounding at least 12 people including the imam of the mosque, local residents said.

A doctor at a local hospital told Reuters on condition of anonymity that two people had died and 18 were injured. There was no official confirmation of the toll.

The explosion occurred near the pulpit of the mosque’s prayer leader just as he rose to deliver his sermon, Haji Khyal Gul, 42, one of those injured, told Reuters.

“My hair, beard, eyebrows were burned … I also received shrapnel in my chest and arm,” he said.

Atal Shinwari, a resident of the area, said the blast occurred at around 1:30 p.m.

A Taliban official, speaking on condition of anonymity, confirmed the blast and said casualties were feared but gave no further details.

There was no immediate claim of responsibility for the apparent attack, but a Taliban spokesman said later on Friday that authorities had arrested three people in connection with the blast.

“These criminals will be treated according to the rules of Sharia and will be punished for their evil deeds,” Taliban spokesman Zabihullah Mujahid said on Twitter.

The blast is the latest in a series to hit mosques in Afghanistan over recent weeks, particularly during Friday prayers, undermining the Taliban claim to have restored security after decades of war.

The mosque was attended by Sunni Muslims. Previous attacks since the Taliban takeover have struck Shi’ite mosques and have been claimed by the Sunni militant group Islamic State.

Accounts of casualties varied. Shinwari said at least 12 people had been wounded, including the imam of the mosque. Another resident said 18 people had been hurt, three seriously.