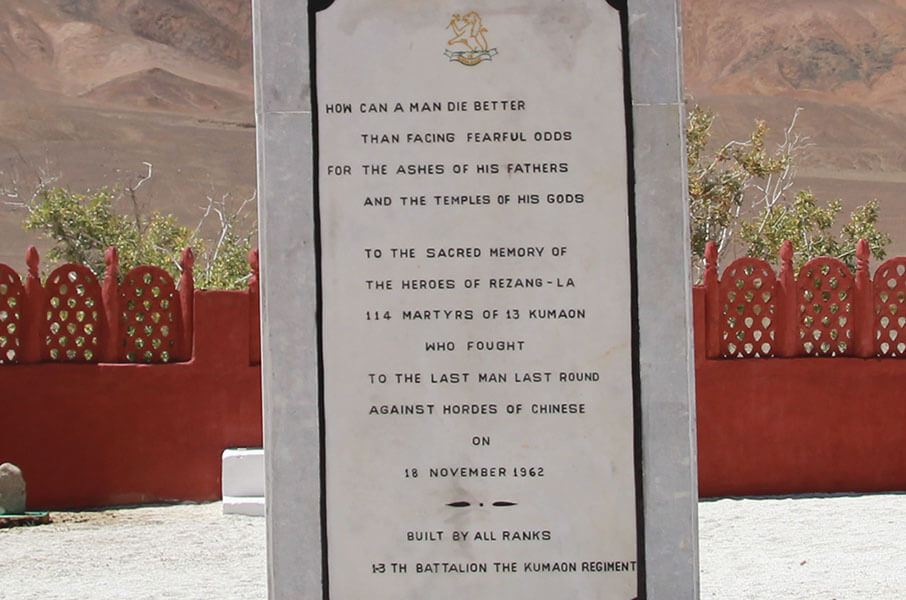 The annals of the Indian Army are replete with stories of bravery and uncommon valor. And then there are stories of courage so overwhelming that it is almost impossible for the human soul to even comprehend that such men walked the face of this very earth.

On a freezing and unforgiving November night, 123 Indian soldiers – frostbitten, weary, hungry and heavily outnumbered – defied the might of the rampaging Chinese Army.

On 18 November 1962, Major Shaitan Singh and men of Charlie Company, 13 Kumaon Regiment, forever passed into the mists of legend.

This is the story of the Battle of Rezang La.

In their initial assault on Indian positions in October, the Chinese had overrun border posts from Daulat Beg Oldie to Damchok, along the Karakoram Range. The defence of Chushul was the responsibility of 114 Brigade, which had a battalion less. An Infantry Brigade has 3 battalions. 114 Brigade had just 1/8 Gurkha Rifles and 5 Jat Regiment. When the danger to Chushul was realized, 13 Kumaon was rushed from Baramulla to augment 114 Brigade.

Other companies of 13 Kumaon occupied heights like Gun Hill, Gurung Hill and Mugger Hill. Charlie Company was given Rezang La, a pass 19 km away on the southeastern approach to Chushul. Rezang La was all rock, bitterly cold with bone chilling winds and the troops were not acclimatized to such extreme temperatures. The company was deployed at a height of 16,404 feet above sea level, and the main company position was defended by the 7th, 8th & 9th platoons. The surrounding mountains isolated it from the rest of the battalion.

The biting cold and the howling winds were accompanied by snowfall. Lack of protective winter clothing made the vigil more treacherous. And to add to the already impossible situation, Charlie Company was “crested to artillery”. This meant that there was an intervening feature, which did not allow Charlie Company the cover and protection of Indian Army’s artillery.

Charlie Company was without cover, without support and on its own.

In the very early hours of 18 November, the Chinese Army attacked the 7th and 8th platoon.

At 0500 hrs, Charlie Company opened up with rifles, machine guns and mortars. The retaliation was so ferocious that hundreds of Chinese lay dead. The first wave of the Chinese Army was repulsed.

At 0540 hrs, Charlie Company came under intense artillery and mortar shelling, and under the cover of this fire, about 350 Chinese attacked 9th platoon. The platoon, true to their training, held their fire till the last moment. When the Chinese were a mere 90 meters away, the 9th platoon opened up with all their weapons. Their fire was devastating and hundreds of Chinese dead bodies littered the “nullahs”. The second wave of the Chinese Army was repulsed.

Major Shaitan Singh moved from platoon to platoon, firing at the enemy and encouraging his men. He ignored the grave danger to his life and kept fighting. They say that he fought like a man possessed, completely oblivious to his own safety.

For the Chinese, this horrific rate of casualties was not sustainable. They changed tactics. 9th platoon was brought under withering MMG fire and under the cover of this fire, 400 Chinese attacked 8th platoon from the rear. This attack was stopped at the platoon barbed wire fence. Simultaneously, a heavily armed assault group of 120 Chinese attacked 7th platoon from the rear. The 7th platoon responded with mortars and rifle fire. There were heavy casualties on both the sides.

By now, the strength of 7th and 8th platoon was severely depleted.

When the Chinese again assaulted the 7th platoon, our soldiers rushed out of their post and engaged the Chinese in hand-to-hand combat. The Chinese brought reinforcements.

The entire 7th and 8th platoon of Charlie Company was martyred. There were no survivors. 9th platoon was very severely depleted and out of ammunition. So, the survivors fought the heavily armed Chinese with their bare hands. Naik Ram Singh, a wrestler, killed many Chinese soldiers with his bare hands before he was shot in the head.

Major Shaitan Singh was constantly fighting, moving from platoon to platoon, encouraging his men and leading from the front. During the course of the battle, he was critically injured by MMG fire. While being evacuated, the Chinese started firing at him and the two soldiers who were accompanying him. Not wanting his soldiers to be killed in such a manner, he ordered them to leave him with his weapon and rejoin the fighting.

Charlie Company, 13 Kumaon, repulsed seven attacks by the Chinese before the entire company was martyred in combat.

On 21 November 1962, a unilateral ceasefire was declared between China and India.

When the Indian Army visited the Charlie Company location after the war, Major Shaitan Singh was found holding his weapon. He had died fighting. The nursing assistant was found dead with bandages and a syringe in his hand. The mortar section commander was found dead, holding a mortar round. He kept firing till his position was overrun and he was killed. Out of the thousand mortar rounds that Charlie Company had, all but 7 had been fired.

Out of the 123 soldiers of Charlie Company, 114 were martyred and 6 were captured by the Chinese Army and kept as PoWs. They later miraculously escaped.

I am from the Kumaon Regiment and I have studied the battle of Rezang La in detail. After all these years I still wonder what motivated Major Shaitan Singh and the entire Charlie Company to so willingly embrace martyrdom. It is unheard of, in the annals of modern warfare.

I don’t know if Rezang La was strategically important or not, but in those dark days of the winter of 1962, for an army facing reverse after reverse, Rezang La somehow became a matter of national honor. This was where the Indian Army dug in and said “thus far, and no further”. Rezang La was not just about “izzat”. Somewhere along the way, it became “zidd”.

These brave 122 fought against 3000 attacking Chinese and counted over 1300 enemy dead before embracing martyrdom.

Today, a memorial stands at Rezang La, honoring the memory of those heroes. It reads:

How can a man die better

For the ashes of his fathers

And the temples of his Gods.

To the sacred memory of the Heroes of Rezang La, 114 Martyrs of 13 Kumaon who fought to the Last Man, Last Round, Against Hordes of Chinese on 18 November 1962.

– Built by All Ranks 13th Battalion, The Kumaon Regiment.

It was today, 59 years ago, that Major Shaitan Singh Bhati launched Charlie Company into battle. It was today that they became immortal.

This post was originally published in THE BRAVEST OF THE BRAVE – MAJOR GAURAV ARYA (VETERAN) (wordpress.com) 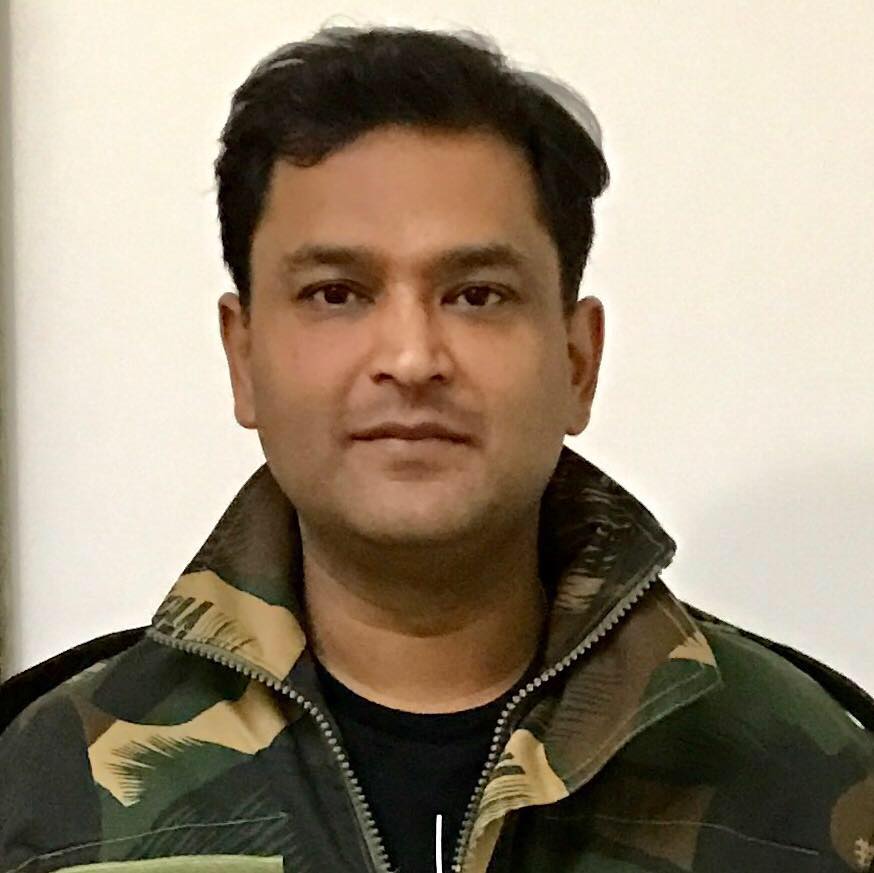 The author is a former Indian Army officer from the Kumaon Regiment and is currently the Editor-In-Chief of Chanakya Forum. He is also the Senior Consulting Editor of the Republic Media Network.

Nov 19, 2021
Hi Gaurav, Great read. Is there a book or any other resource (website/youtube channel) you will recommend that has similar stories of military valor? I would like to learn more about the Indian Army's battles. Regards, Devesh

Nov 18, 2021
We are safe and living peacefully because of the soldiers who fight against all odds, just for our well being. There goes a quote:" We miss homes because we SAVE homes".