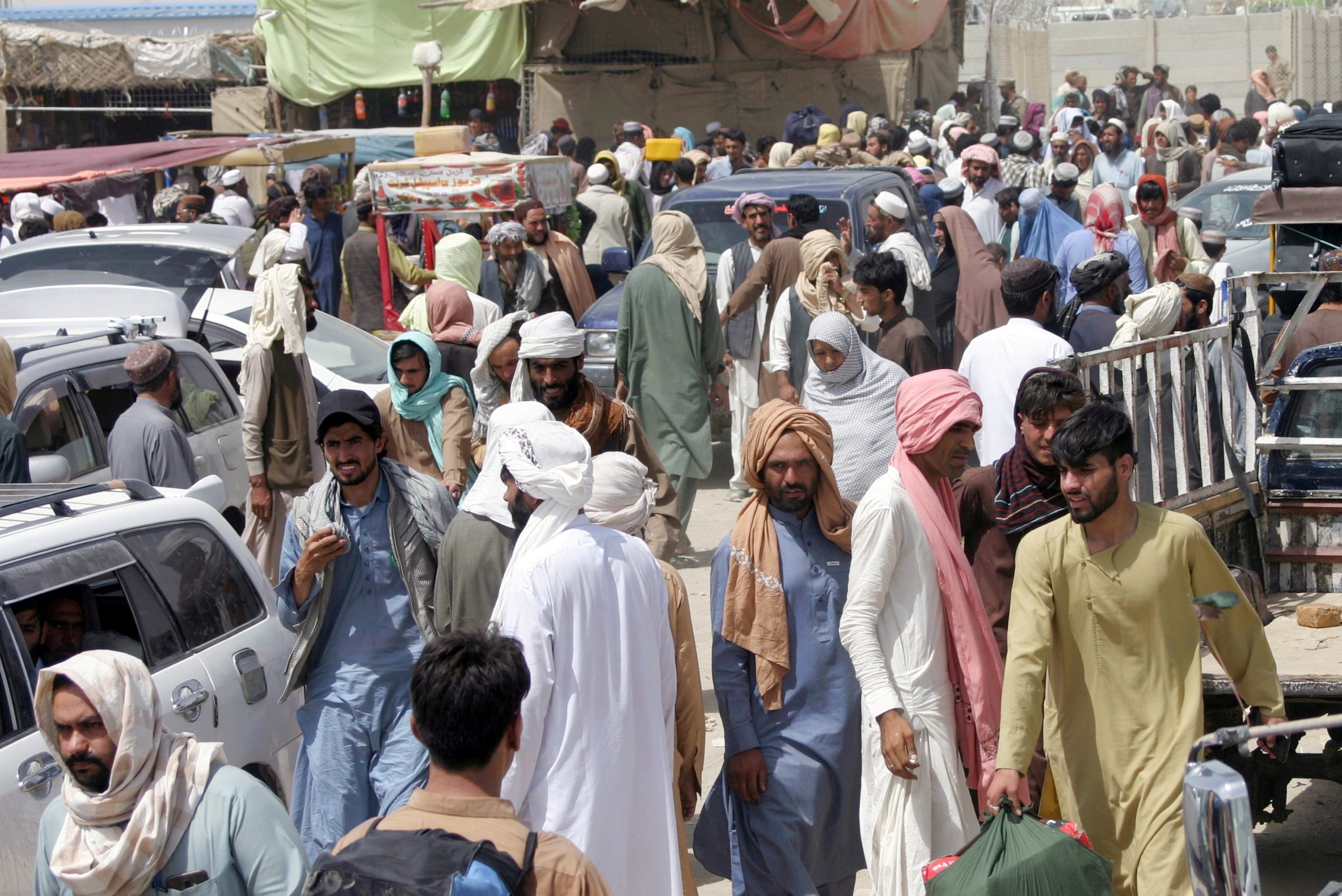 By Jonathan Landay and Humeyra Pamuk

WASHINGTON (Reuters) – As the last U.S. troops prepared to leave Afghanistan, Hussain, a U.S. passport holder who worked with the U.S. military, scrambled with his six daughters through Taliban checkpoints to the gates of Kabul airport for several days in a row, hoping to catch a flight to safety.

He had called and emailed the U.S. Embassy for days without a response. Then a U.S. soldier phoned him to say his only chance for a flight out was alone, without his daughters who are not U.S. citizens. Hussain’s wife had died in July of COVID-19, and leaving would mean abandoning them. On Monday night, the family stood in the throngs outside Kabul airport, listening to the roar of the final U.S. C-17 aircraft taking off, ending America’s two decade-long military intervention in Afghanistan.

Hussain now is among an untold number in Afghanistan weighing a potentially hazardous overland journey, he told Reuters Tuesday, speaking through a translator. “I hear from news and relatives that thousands are waiting at the Afghanistan borders with Pakistan and trying to get into Pakistan,” said Hussain, who requested that his last name be withheld for security reasons. “I do not know, should I go to Tajikistan,” he wondered, worrying how he will be able to look after his daughters on the road if he goes.

It could be days or weeks before the negotiations between the Taliban, Qatar and Turkey on how to run the airport are finalised. Many have already set out for Pakistan to the east and south, while others are trying to reach Afghanistan’s borders with Central Asian states, say people involved in private evacuation efforts, who requested anonymity for security reasons.

The journeys, through Taliban checkpoints over hundreds of miles of rough roads via a patchwork of private cars, public buses and mini buses, are risk-filled, especially for former military and security officers and government officials. Foreign passport holders like Hussain, Afghans with visas and bribe-payers were among those who have made it out so far.

“There are just brick walls around the country right now,” said a former U.S. official who belongs to informal networks that helped American citizens, green card holders and at-risk Afghans navigate the chaos around Hamid Karzai International Airport and onto evacuation flights.

The U.N. refugee agency has said up to half a million Afghans could flee https://www.reuters.com/world/asia-pacific/half-million-afghans-could-flee-across-borders-unhcr-2021-08-27 their homeland by year’s end.

More than 122,000 people, including around 6,000 Americans, were flown out of Kabul since Aug. 14, the day before the Taliban overran the capital. U.S. Secretary of State Antony Blinken on Monday vowed to pursue a “relentless effort” to help an estimated 200 Americans remaining in the country, and at-risk Afghans leave.

Helping people travel overland will be tough, he said. “This will be an entirely different phase from the evacuation that just concluded.” Tens of thousands of Afghans who worked for the U.S. government and applied for Special Immigration Visas (SIVs) and many other at-risk Afghans are still in the country. The State Department on Sunday published a declaration by around 100 countries committed to helping Afghans reach destinations outside Afghanistan. However, none of Afghanistan’s neighbors signed up.

Tajikistan has pledged to accept 100,000 Afghan refugees, while Uzbekistan committed to allow transit through its territory for Americans and potentially others from Afghanistan. But it wasn’t clear how many people, if any yet, both countries have actually allowed in. Pakistan – home to more than 1.4 million Afghan refugees – has admitted some 2,000 Afghans employed by foreign missions, international institutions, and non-governmental groups on one-month transit visas, said a diplomatic source on condition of anonymity.

“The (overland) option is the only thing that’s possible right now,” said a U.S. military veteran involved in helping to evacuate at-risk Afghans. But the Taliban have set up more checkpoints on the main road leading north toward Uzbekistan and Tajikistan since the U.S. evacuation from Kabul airport ended, the former U.S. official said. The militants are banning travel by women unaccompanied by male family members.

Some private groups helping Afghans escape said they are advising people not to try to reach the country’s frontiers unless they know that they are being pursued by the Taliban. “Unless you are someone who is being actively hunted, the rest of the people should lay low,” said the former U.S. official. “I know that is impossible to say to a population that is very scared for the future.”