Why China is wary of Quad? – issues veiled warning to Bangladesh, gets a curt reply 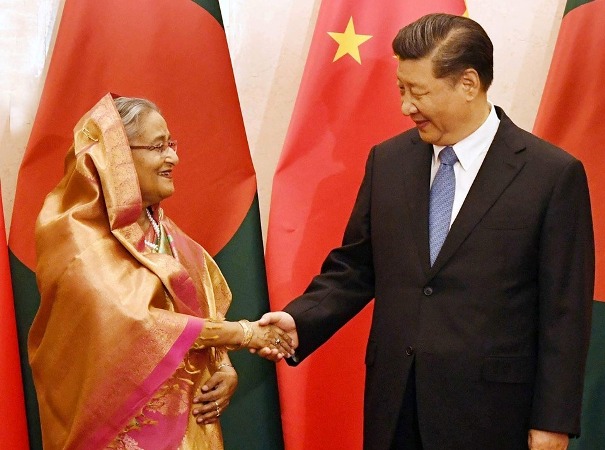 China has always been dismissive about Quad and avoid creating any perception that it is too concerned about the grouping. But many recent statements and actions by China exposes its nervousness and apprehensions about Quad overshadowing it in IOR and Indo Pacific. The recent statement by Chinese spokesperson yesterday about Bangladesh becoming part of Quad is one such example.

Formed in 2007, the Quadrilateral Security Dialogue, Quad for short, is an informal grouping of India, the US, Australia and Japan. The group remained away from limelight till 2020 when the Western powers woke up to the challenge being posed by China and its belligerent actions with the Covid 19 pandemic acting as a catalyst for these countries to come together. China had almost started threatening Australia and Japan using its edge in trade and dependency of these countries on China in the global supply chain to bring them around to Chinese point of view. But the backlash from Quad group with President Biden not ceding an inch to China post Trump presidency, which it hoped for, was something which China miscalculated it seems.
The first summit of the Quad leaders was hosted by US President Joe Biden on March 12 and the virtual meeting was attended by Prime Minister Narendra Modi, Australian Prime Minister Scott Morrison and Japanese Prime Minister Yoshihide Suga. The four Quad leaders have vowed to strive for an Indo-Pacific region that is free, open, inclusive, healthy, anchored by democratic values, and unconstrained by coercion, sending an clear message to China against its aggressive actions in the region. UK and EU have also shown their tilt towards India in their recently revealed policies on Indo Pacific and strategy. France had participated in a Naval Exercise with Quad nations in Indian Ocean. The four Quad member countries have resolved to uphold a rules-based international order in the Indo-Pacific amid growing Chinese assertiveness in the strategically vital region.
With the global and regional scenarios becoming unfavourable to its expansionist policy, China  warned Bangladesh against joining the US-led Quad alliance, saying that Dhaka’s participation in the anti-Beijing “club” would result in “substantial damage” to bilateral relations.  “Obviously it will not be a good idea for Bangladesh to participate in this small club of four (Quad) because it will substantially damage our bilateral relationship,” Ambassador Li said at a virtual meeting organised by the Diplomatic Correspondents Association, Bangladesh on Monday. “Quad says it is only for economic purposes and security and so on. But that’s not true. We know that Quad is aimed at China. History has proved again and again such partnership surely damages our neighbours’ own social, economic development and people’s well-being.” The Chinese Ambassador’s words, describing Quad as a”narrow-purposed” geopolitical clique which Bangladesh should avoid, clearly reveal the underlying concerns of Beijing about losing its influence in the neighbourhood.
On Bangladesh’s part, the provocative remarks by China’s Ambassador in Dhaka Li Jiming rebuffed by Bangladesh’s foreign minister Dr AK Abdul on Tuesday as “very unfortunate” and “aggressive”. “We’re an independent and sovereign state. We decide our foreign policy. But yes, any country can uphold its position,” he told reporters on Tuesday. “Naturally, he (Chinese ambassador) represents a country. They can say what they want. Maybe they don’t want it (Bangladesh joining the Quad),” Momen said, adding that no one from the Quad has approached Bangladesh yet.
Why China chose to make a preemptive statement about Bangladesh joining Quad is not quite surprising as more and more countries in the region are standing up to China for its unilateral actions in land and sea. India is in a position of advantage in the geopolitical posturing which is unveiling as both West and the ASEAN look upto it for maintaining balance of power in the region.