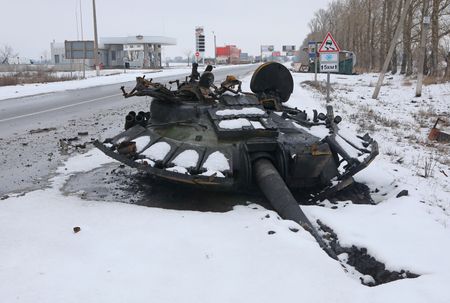 Those who stick out their necks early in developing military and geopolitical situations many times tend to eat crow. I have experienced this over time but yet continue to repeat the folly. In most earlier analyses I had assessed that Putin would not go to war over the Ukraine issue because he could probably achieve his aims by simply following brinkmanship; turning the screws of coercion through calibration. However, applying reason here is unlikely to give accurate outcomes in assessment.  When Putin probably realised that NATO just did not have the stomach to put boots on ground in a confrontation with Russia on virtually its home turf, he probably thought the risks of waging war would be minimal.

There is no doubt that NATO miscalculated the Russian intent, although a week before the initiation of the invasion, it gave enough public warnings of impending war. For NATO deploying its troops into Ukraine would have been provocative, but placing some elements there may have partially deterred Putin. The US act of token deployment and reinforcement of existing troops in some frontline states proved to be more cosmetic than strategic. No one can blame NATO for not trying enough diplomatically, but it’s the times that have brought up this situation too.

For Russia the opportunity to send home the message to NATO and the West in general was now, when both the latter are in shades of political and military weakness, especially after Afghanistan. The non-acceptance of integration of Ukraine with NATO is something Russia was indicating very clearly much earlier, and more explicitly from 2014 onwards. In 2022 Putin was perceiving that his message since 2014 had not been taken seriously enough. War was therefore the inevitable option.

War in Europe through the medium of an open physical invasion of another nation is not something easily imagined. The Former Soviet Union (FSU) did it to Hungary in 1956 and Czechoslovakia in 1968 but these nations were both within the Warsaw Pact and the action did not directly impact NATO. The Cold War dynamics were quite clear; NATO did not set up as huge a conventional war machine as the FSU. The deterrence was essentially nuclear in nature, although it was by no means a trigger happy nuclear situation. The post Cold War developments progressively diluted nuclear deterrence. Thus, Putin’s ability to decide on conventional invasion into a nation, which NATO was attempting to formally integrate, was possible due to this dilution.

What sort of war does Putin wish to pursue in Ukraine now that he has launched conflict initiation. Since 2014 he has followed the course of hybrid war against the state of Ukraine, with particular emphasis on taking control of and influencing the eastern region of Donbass where a Russian ethnic majority exists. The massing of 130,000 troops and 1200 tanks with aircraft and Special Forces was initially indicative of military intimidation which is used to reinforce hybrid war. However, even now after crossing the borders, there is no surety how exactly this strength will be applied. His political aim appears clear; to execute regime change, bring a Russia friendly leadership at the helm, establish effective control over the state and secure the two separatist enclaves in Donbass.

One may add a politico-military aim; prevention of the use of Ukraine as an instrument against Russia. He can achieve this partially through the military aim of comprehensively defeating the Ukrainian Armed Forces and then consolidating. Even with a Russia friendly regime, a state of ferment, current leadership in exile and an effective asymmetric confrontation in place, would not achieve the desired conflict termination.

As such Putin has a spectrum of options commencing with limited employment of hard military power. This could mean a brief shaping of the battlefield with cyber-attacks to break down command and control, supply chains and public/military logistics.  This would be accompanied by suppression of air defence systems by cyber and physical attacks, aerial attacks on airfields, command centres and on communication facilities. Isolation of major cities would be in order; without attempting to capture them. Limited intimidation of the public by selective targeting of some residential quarters as a deliberate collateral. Quick destruction of armoured subunits resisting Russian advance and pounding of selected areas with artillery. With all this happening the putting out of imagery and sounds of the destruction is part of the information warfare effort to psychologically break the will to resist.

Capturing cities is not important as long as they are isolated, as stated. However, capture of Kiev and displacement of the current government would be an important intent of Russia. Disengagement and withdrawal would not be part of the plan; it would be planned as per contingency.

However, from all indicators the intent described above is far from being achieved. The concept therefore will obviously have to change. Unconfirmed sources indicate Ukrainian counter attacks proving that they are no pushovers. The Ukraine Government and the public appear to have their own information warfare in place. It’s Members of Parliament are demonstrating the use of Kalashnikovs and President Zelensky is urging the people to fight back. Reports are suggesting counter actions by the Ukrainians; the Kiev airport itself appears to be in the midst of a ding-dong battle. Public perception may change with potential Russian setbacks but do remember that Russia can muster hundreds of thousands under arms and has offensive equipment in droves. It’s a question of redeployment of some of this but with a time penalty.

Ukraine can be sure that if the Russian war machine does not achieve intended success as per plan, it will turn on the screws of higher intimidation. In scenarios of this kind one can foresee that the Ukrainian Government will be replaced the moment Kiev falls. A government in hiding or in exile is the usual alternative to keep the struggle going. However, can this come down to an Iraq like situation where the doctrine of ‘Shock and Awe’ paralysed Iraq’s forces and led to quick surrender but was speedily followed by an insurgency cum terror campaign which did not allow the nation and the region to witness peace for the next 18 years.

There are limits to Ukraine’s ability to fight back asymmetrically as there are of Russian ability to use destructive intimidation as a tool. Russia cannot bring Ukraine to a Syria type of situation and Ukraine cannot allow itself to be ravaged in that manner either. It’s the compromise both will be seeking and that will be the biggest challenge should this elongate. The last time Central/Eastern Europe saw this was with the civil war in Bosnia and it created hell for Europe. The refugee crisis will be more intense than anything in the recent past.

You can have an idea of this from closer home. In 1987-90 India deployed 100,000 troops to North and East Sri Lanka to control the LTTE. The Tamil population was 2 million strong. Yes, we stabilised the subregion but did not wipe out insurgency; you can say we did not intend to either.

The population of Ukraine is 44 million and the Russian Army deployed for the task is 1,30,000. No doubt there are ample tanks and airpower, besides missiles and artillery, also available. But no one uses all these to fight insurgencies. The Russians are of course unpredictable and could do even that but it will draw the ire of the international community. In other words, if Russia has to fight an insurgency it will need much more infantry and be bogged down for many years with proxy support and perhaps even volunteers coming from many parts of Europe to fight them. That is why Putin cannot afford to elongate this at any cost. His attainment of political and military objectives may for the moment seem well out of control. The Ukrainians are displaying stomach for a fight with much greater resolve than what NATO may have imagined and Zelensky is emerging as a hero.

The longer this goes on, the harder will be the turn of economic screws on Russia, although Russian economists and planners may currently be poring over the likely effect of total sanctions. Taking Russia out of the Society for Worldwide Interbank Financial Telecommunications (SWIFT) will create even bigger problems; apparently Russia stands to lose 600 billion USD. Russia will attempt to create its own financial transfer system with China; the latter being the wild card in this game. If China’s money gets stuck because of competing money transfer systems it will be trillions remaining in the US not 600 billion like Russia. In fact, that would have signs of collapse of the international monetary system.

Among other areas of impact, it is predicted that Iran will sign with the US on nuclear issues in Vienna within the next few days. The US holds the upper hand.  Once US sanctions on Iran lift and the latter opens the taps on crude oil exports the Saudis will follow the same course. This will create chaos for Russia as oil and energy prices decline and SWIFT exclusion increases. The Russians could be on their knees.

Calculations have to take the third and fourth order of effect in the modern world of warfighting. It’s no longer weapon on weapon and man on man. This has been a situation of severe miscalculations thus far and threatens to remain so. That is because the world is yet to get to grips with the complexity of economics, politics and war, all coming together. It’s not the first time, having happened many times before too. Memories remain short, though.

Mar 03, 2022
NATO and European union still carry the cold-war hangover. All the problems stem from that. Having effected disintegration of USSR in the past, their urge to poke Russia remains undiminished. They are doing it by integrating former provinces of USSR into NATO and encircling Russia with deployment of missiles. This war has been provoked by NATO and they should stop with immediate retraction and back-pedalling on all provocative actions.

Feb 28, 2022
Sir, Next few days will be very crucial, both sides will certainly look for talks and negotiations at the earliest and come close to some sort understanding atleast. Putin will certainly look for regime change in Ukraine which will be his prime objective. US could have easily avoided the situation with early diplomatic intervention considering atleast Russia National Security Interest. What ever be the outcome now onwards it has certainly dented the credibility of NATO in the region. Jai Hind