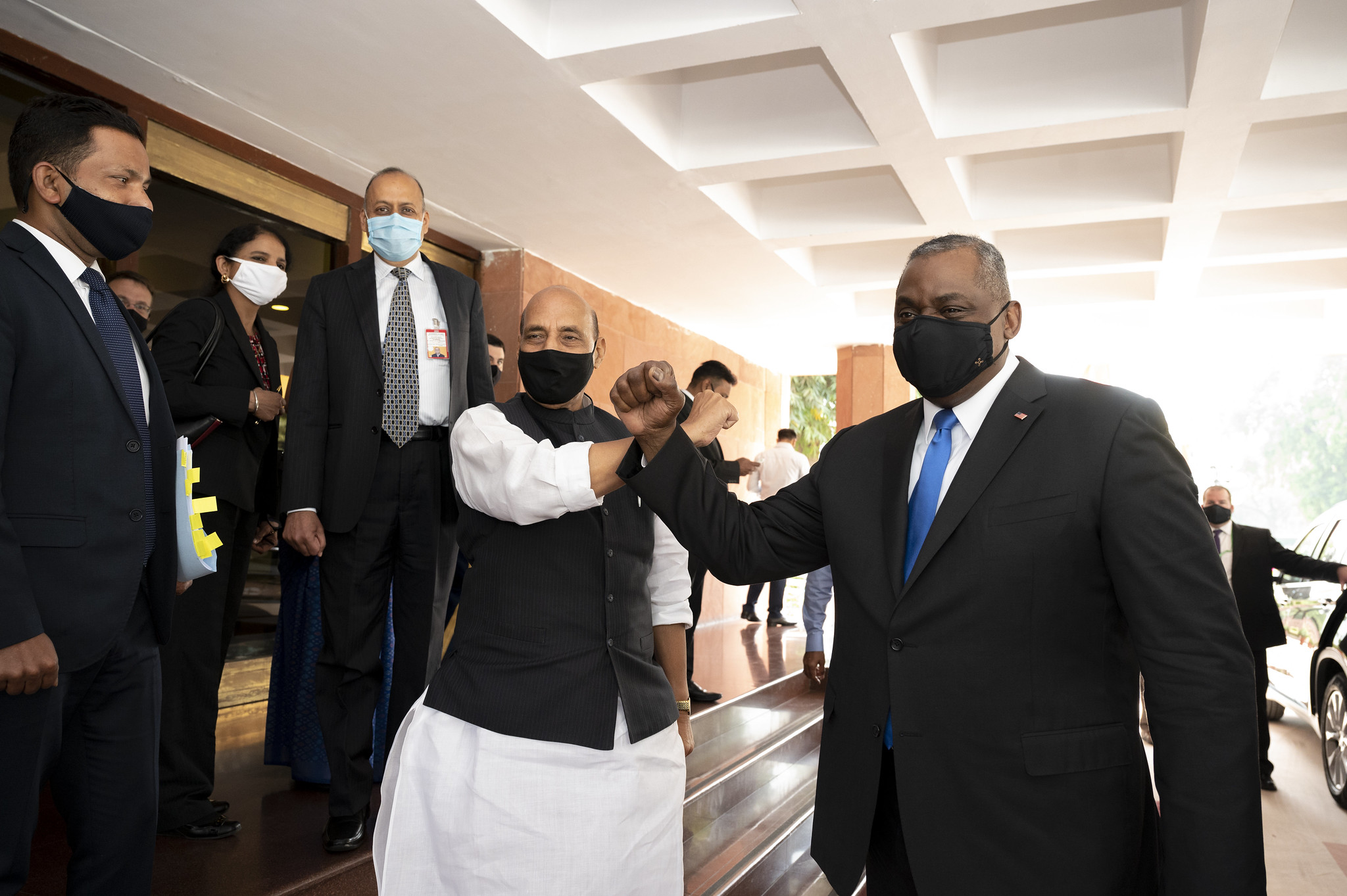 US Defence Secretary Austin’s visit to India had multiple facets. It was important bilaterally for us for making an assessment of the perspectives of the new Pentagon chief on India-US defence ties and the message he was bringing about the new administration’s thinking on details of defence cooperation with India. His immediate predecessors were strongly committed to defence cooperation and the current high level was achieved under them. The Pentagon has, in fact, played a key role in recent years to give a strategic ballast to bilateral ties. With the change of administration raising some uncertainties about its approach to India-related issues, as also the professional background of Austin as Central Command Chief (with the Command’s bias towards Pakistan) taking his measure was important.

Austin’s early visit to India made sense in the context of the Biden administration’s China policy. Contrary to speculation that Biden might move towards some form of co-existence with China, a combative policy towards Beijing is being shaped, both in terms of enunciation, as in the Interim National Security Strategic Guidance, and diplomacy on the ground as seen in the 2+2 (Foreign and Defence Ministers together) dialogues with Japan and South Korea, followed by Austin’s visit to India, even as the US-China meeting at Foreign Minister/National Security Adviser was being held in Alaska. The harshness of the tone towards China in the US-Japan joint statement was an assurance to Japan on the operational aspects of the US-Japan defence treaty in the face of all-round Chinese aggressiveness. China was missing in the joint statement with South Korea no doubt to avoid disturbing its massive economic ties with China.

The US had already announced that the Alaska meeting would not be a strategic dialogue with China but that the US would be raising all the issues of US concern about Chinese internal and external policies and the basis of relations moving forward will be these specific concerns. It is possible that the US did not anticipate a diplomatically belligerent response from China to American grouses. At Alaska, the public spat between US and China starkly reflects the change of power equations between the two countries, which now goes beyond economics. By sharply rapping the US on its knuckles, China is conveying that it sees itself as more than an equal to the US and is not cowed down by the latter’s presumed strength. This is a message that all countries, including India, have to absorb. China’s self-confidence has soared a point that it believes it can have its way on contentious issues and others do not have the power to deter it.

Austin’s visit was not intended to produce any concrete result; it was more in the nature of meeting of minds on the defence agenda ahead, after taking stock of the present. The joint press conference of the two defence ministers did not strike any new ground. The agreement to enhance cooperation with the US Indo-Pacific, Central and Africa Commands and realise the full potential of the signed foundational agreements, with India making a pitch for US industry investing in its defence sector, carries forward the existing agenda. The resolve to maintain a free, open, and inclusive Indo-Pacific region was the closest reference to the China problem in Raksha Mantri’s public remarks. Elevating the US-India major defence partnership through regional security cooperation, information sharing and logistics, artificial intelligence, space and cyber cooperation, engagement with like-minded partners through multilateral groupings such as the Quad and ASEAN, was highlighted as items on our defence cooperation agenda by Austin who sees India as an increasingly important partner in today’s “rapidly shifting international dynamics” and “a central pillar of our approach to the region”.

Austin’s visit was given a needless controversial dimension by Senator Menendez, Chairman of the Senate Foreign Relations Committee, prodding him to raise human rights issues during his visit and also warn that the acquisition of the S 400 system from Russia would expose India to potential US sanctions. If the indications from Washington have been that the US would raise  human rights concerns with India in private, then it was all the more unwise of Austin to say to the press that he raised human rights issues with Indian ministers. That apart, it is not in his remit to raise such highly political and controversial non-defence issues as Defence Secretary. To link them to defence cooperation is a serious mistake, as it raises future concerns about the stability of defence ties if the US and India sharply disagree on any US judgment on human rights issues in India. Even saying that he raised these issues meant that Austin was taking direction from the Senator and validating his distortions. He should have been aware that he was wading into our domestic politics on an issue where opposition political and civil society lobbies in India are looking to external validation of their position on CAA, revision of Article 370 and treatment of minorities etc. In the event our side clarified that such issues were not raised with the ministers and that Austin’s statement was misleading.

Austin’s comment on the S-400 keeps the fuse of potential sanctions on India lit when good sense would dictate that the matter should be quietly closed and not allowed to rock bilateral ties just when defence ties are on the upswing and stronger cooperation and understandings are needed to counter the China threat. More astute diplomacy would have had Austin say that US government raises human rights issues with others as needed, besides finessing the S-400 issue by saying that the US will cross that bridge when the time comes. In any case, India, unlike Turkey, is not a NATO ally, its military equipment is not of NATO origin or standards, and it does not host any US military base. Most of our equipment is of Russian origin, including advanced aircraft. If India had bought a US air defence system and the Russians expressed concern about the security of their equipment in India, how would we have responded? We have told the US side repeatedly that our purchase of S 400 precedes the US legislation, and it should not have retroactive effect. That is only half the argument, as we cannot be asked to adjust our defence ties with Russia to the state of US-Russia ties. US law should not condition our ties with Russia, nor should the choice of our partners be subject to choices of others. India walking out of the S 400 deal under US pressure would irreparably damage our ties with Russia. What if Russia interrupted spare parts supplies, overhaul of Russian aircraft and naval equipment, began selling lethal equipment to Pakistan in retaliation? As is happens, during the Ladakh stand-off with China our request for emergency supplies from Russia was very favourably received. For US to ask us to downgrade our defence ties with Russia suggests that it is a more reliable defence partner, which is not true historically, besides raising doubts about the future. India is playing the S 400 issue in low key so that a waiver is obtained. It is determined to go ahead with the purchase, with the first deliveries taking place at the end of this year.

From New Delhi Austin flew to Afghanistan from where he telephoned Pakistan’s General Bajwa. The Pentagon press release on the conversation has meaning for India. Austin “reinforced the United Staes’ commitment to maintaining a strong bilateral defense relationship with Pakistan and expressed gratitude for Islamabad’s continued support for the Afghan peace process”. The Central Command syndrome? “Gratitude” to a country that had nurtured the Taliban and enabled it to force the US to retreat from Afghanistan? Afghan Vice-President Saleh would have a very different view of Pakistan’s role. What is the nature of a strong defence relationship that the US wants to maintain with a Pakistan already an effective military ally of China is something India would need to keep a close eye on.

Kanwal Sibal, with 41 years of diplomatic experience, was India’s Foreign Secretary. He was Ambassador to Turkey, Egypt, France and Russia and DCM in Washington (with rank of ambassador). He has written more than 550 Op-Eds and other articles for major Indian and foreign publications. He is a Grand Officier of France’s Ordre National du Merite (2004), recipient of the Padma Shree award ( 2017) and honoured by India and Contributions to International Cooperation award by Russia (2017).

Jul 01, 2021
I am happy to see day by day Chanakya Forum have continuously improving and providing nice articles for our young aspirant for UPSC