UNSC reform negotiations could go on for another 75 years without any progress: India 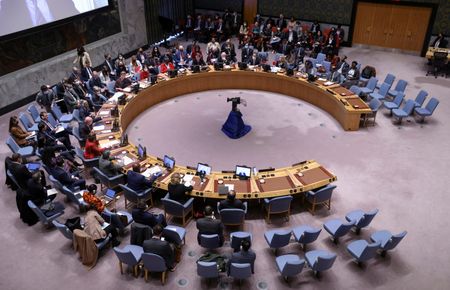 United Nations, Jul 13 (PTI) India has criticised the UN General Assembly’s decision to roll over the Inter-Governmental Negotiations on Security Council reform to the next UNGA session, terming it a “wasted opportunity to instill a breath of life into a process that has shown no signs of life or growth in over four decades.

The 193-member General Assembly on Tuesday adopted a draft oral decision on Security Council reform, rolling over the Inter-Governmental Negotiations (IGN) process to the 77th session of the UN General Assembly that begins in September this year.

Charg d’Affaires at the Permanent Mission of India to the UN Ambassador R Ravindra said India has been consistent in its position that the roll-over decision of the IGN simply cannot be reduced to a “mindless technical exercise. We see this technical roll-over decision as yet another wasted opportunity to instill a breath of life into a process that has shown no signs of life or growth in over four decades, he said.

He asserted that it is now apparent that in its current form and modalities – that is, without application of the GA Rules of Procedure, without an official record of proceedings, and without a single negotiating text – the IGN could well go on for yet another 75 years without any progress whatsoever in the direction of genuine reform.

India underlined that as a responsible and constructive member of the United Nations, it will continue to engage in this process alongside “our reform-minded partners, and persist with our efforts to move from repetitive speeches to text-based negotiations. New Delhi, however, cautioned that for those of us who truly wish to fulfil our leaders’ commitment to early and comprehensive Security Council reforms, looking beyond the IGN may now provide the only viable pathway.”

Pointing out that the IGN process is in its 14th year since it began, Shahid said: We thus have a collective responsibility to demonstrate that the IGN is working and not let the process turn into a Sisyphean exercise. The PGA noted that the IGN during the 76th session ended with all member states joining consensus on his oral decision to roll over the text to the next session.

Significantly, Shahid in his remarks made a mention of the gradual movement toward text-based negotiations , a demand that India has repeatedly been making to ensure the UNSC reform process moves forward. Going forward, I would encourage all delegations to work tirelessly to further narrow down the divergences and gradually move the process towards text-based negotiations, using the Co-Chairs Elements Paper, along with the Framework Document, Shahid said.

It is highly significant that Shahid in a letter to the UN Member States on IGN and Draft Oral Decision earlier this month, for the first time since the commencement of the IGN, made a mention of the gradual movement toward text-based negotiations. Ravindra said India joined the consensus in the adoption of the draft presented simply to acknowledge Shahid’s personal efforts .

We would like to place on record our appreciation for your efforts to steer this year’s IGN towards some progress, Ravindra said. India also appreciated the innovative and proactive approach taken by co-Chairs Qatar’s Permanent Representative Alya Ahmed Saif Al-Thani and Permanent Representative of Denmark Martin Bille Hermann, which has resulted in some improvements in the Elements Paper compared to last year, including a greater number of convergences, and some additional attributions.

Ravindra added that as the only formal GA outcome that emerges from this process each year, it must also evolve and reflect the progress achieved during our deliberations. He said India is encouraged by Shahid’s efforts to introduce in the decision a small reflection of this evolution, based on your wide-ranging consultations and the recommendation of the co-Chairs.

Ravindra, however, added that India is equally dismayed at the vehement opposition to even such a minuscule change. I must say though, that we were not surprised – as we have also seen last year, it is clearly in the interest of those who seek status quo, to keep this process frozen in repetitive cycles, he said. In their statements, China, Pakistan, Italy and South Korea mentioned Shahid’s letter and his reference to text-based negotiations .

The delegations said that Shahid’s reference to moving to text-based negotiations in his letter to UN member states reflects the PGA’s personal view and is not endorsed by other groups such as Uniting for Consensus (UfC) and other individual member states. The PGA’s letter to the Member States appears to have unruffled calculations of these delegations who said in their interventions that the UN membership is not ready for text-based negotiations, in effect making it clear who favours and opposes the UNSC reforms.

The UfC, which includes Italy, South Korea, Turkey and Pakistan, supports expanding the Security Council only in the non-permanent category and opposes increasing the Council’s permanent members and veto powers. India has been at the forefront of the years-long efforts to reform the Security Council, saying it rightly deserves a place as a permanent member of the Council, which in its current form does not represent the geo-political realities of the 21st Century.

The G4 nations of India, Brazil, Germany and Japan have reaffirmed that it is indispensable to reform the Security Council through an expansion in permanent and non-permanent seats to enable the UN organ to better deal with the ever-complex and evolving challenges to the maintenance of international peace and security.

The G4 nations have also voiced their strong determination to work towards launching text-based negotiations without further delay in the inter-governmental negotiations (IGN), on the basis of a single document, with a view to its adoption in the General Assembly.