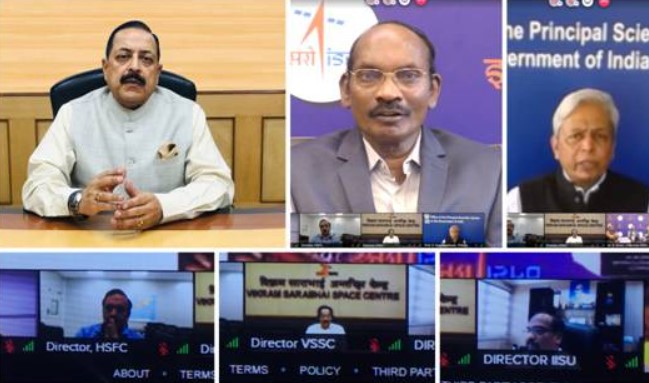 Addressing the Conclave, Dr Jitendra Singh said, the Directorate of Technology Development & Innovation (DTDI) based at ISRO Headquarters is an important link for Industry, Innovators and Academia for Research and R&D. He said, ever since Prime Minister Narendra Modi took charge, he has been giving special impetus to Space Technology and for the first time in 70 years, the sector has been unlocked for private participation to make India a competitive Space market, besides taking the benefits of the Space programme to the poorest in the country.

Dwelling on some of the Futuristic and Disruptive Technologies, Dr Jitendra Singh said, development of Satellite Based Quantum Communication will enable unconditional data security to the country’s communication network. He said, the recent demonstration of quantum communication in free space, over a distance of 300 m by ISRO, in Ahmedabad is a major milestone towards the development of Satellite Based Quantum Communication, which our country is trying to demonstrate in near future. He said that each of the futuristic technology has potential spin-off applications and these must be implemented in focused areas and government flagship programmes, which touch the life of every citizen.

The Minister congratulated ISRO for choosing Big Data Analytics as another area of investment as ISRO generates enormous amount of data from its various satellite missions and ground-based systems. He said, the investment of ISRO in terms of its intellectual and financial resources has resulted into the plethora of futuristic technologies for the space sector. He called upon the scientists to focus on thrust areas such as Artificial intelligence/Machine learning, Space Debris, Global climate study, cost effective technology access to space, indigenous manufacturing of components & parts for space systems, and green propellants. He reiterated that ISRO needs to develop mechanism to proliferate the utilizations of the futuristic technologies towards achieving Prime Minister’s vision of ‘Atmanirbhar Bharat’ mission.

Dr Jitendra Singh underlined that in the post space reforms period, the space technology landscape has changed and it must enable the participation of industries, private entities, towards the development of futuristic and disruptive technologies, besides Research and Development for innovative technologies. He urged the ISRO to bring the synergy of the efforts for inclusive development and make contributions to vibrant global economy and reap the opportunity derived from the futuristic technologies which are going to be the game changers for the space sector.

Dr Jitendra Singh pointed out that a gamut of futuristic and disruptive technologies being undertaken by ISRO include quantum radar, self-eating rocket, self-healing spacecraft and space vehicle, self-destructive satellites, photon thruster, Space-Based-Solar-Power, a bunch of Artificial Intelligence models that range from agriculture, Land use Land Cover to planetary and deep space exploration.