UNGA Emergency Special Session on Ukraine to resume on Mar 23 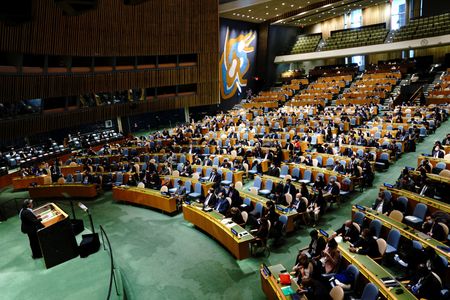 United Nations, Mar 22 (PTI) The Emergency Special Session of the UN General Assembly on Ukraine will resume on Wednesday after 22 member states, including France, the UK and the US, wrote to the President of the 193-member UN body, Abdulla Shahid, to convene the meeting.

Shahid received a letter from 22 member states calling for the resumption of the 11th Emergency Special Session of the UNGA. In a tweet on Monday, the UNGA president said he will be convening the Emergency Special Session on March 23 in the General Assembly Hall. A draft resolution sponsored by Ukraine and other member states has been submitted and is being processed, said Paulina Kubiak Greer, spokesperson for the President of the General Assembly.

The countries that wrote to Shahid calling for the resumption of the session include Canada, France, Germany, Italy, Japan, Poland, Turkey, Ukraine, the UK and the US. Before the end of the session on March 2, the General Assembly had voted to reaffirm its commitment to the sovereignty, independence, unity and territorial integrity of Ukraine within its internationally recognised borders and deplored in the strongest terms Russia’s aggression against Ukraine.

India, along with 34 other nations, had abstained on the resolution, which was adopted with 141 votes in favour and five member states voting against. The resolution urged the immediate peaceful resolution of the conflict between Russia and Ukraine through political dialogue, negotiations, mediation and other peaceful means.

Nearly 100 UN member states — including Afghanistan, Canada, France, Germany, Ireland, Kuwait, Singapore, Turkey, Ukraine, the UK and the US — had co-sponsored the resolution titled ‘Aggression Against Ukraine’. In the Explanation of Vote in the General Assembly, India had said it was deeply concerned over the rapidly deteriorating situation in Ukraine and the ensuing humanitarian crisis. It had demanded “safe and uninterrupted” passage for all its nationals, including students, who were stranded in Ukraine and cities in the conflict zones.

India’s Permanent Representative to the UN Ambassador T S Tirumurti had said that India remained “firm in its conviction” that “differences can only be resolved through dialogue and diplomacy” and added that New Delhi supported the international community’s call for an immediate ceasefire.