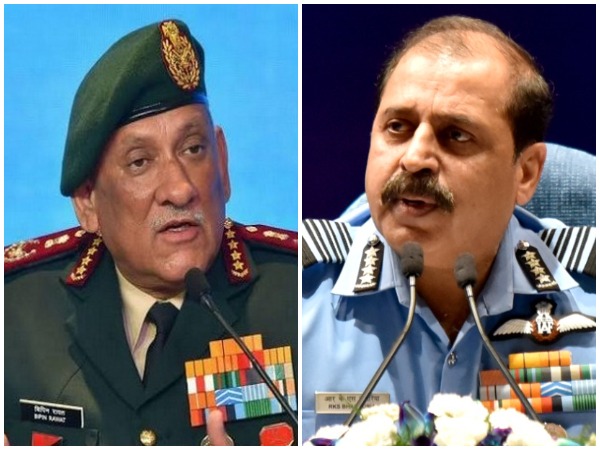 New Delhi [India], July 3 (ANI): The difference of opinion over the creation of integrated theatre commands has now come out in open with Chief of Defence Staff General Bipin Rawat stating that the air arm of the military was supposed to play a supporting role for the other armed forces.

In response, the Indian Air Force refused to be drawn into a media debate on the matter but its chief Air Chief Marshal RKS Bhadauria clarified that the IAF was in support of the creation of theatre commands but it should be done in the right way.

He also disagreed with the CDS remarks comparing the IAF with combat support arms of the Army like Engineers and Artillery and stated that the IAF had a bigger air power role.

The CDS is working towards the creation of four theatre commands of which three will be headed by Army officers and one by Navy officers. All the theatre commanders would report to the CDS as per the proposals which are yet to be approved by the Defence Minister and the government.

The verbal spat happened during a seminar held by the Global Counter-Terrorism Council where the CDS said: “The Air Force is required to provide support to ground forces. Do not forget that the air force continues to remain a supporting arm to the armed force. Just as artillery and engineers support the combatant arms of the army. They have an air defence charter and a charter for supporting ground forces in times of operations.”

Emphasising that the air force needs to understand ‘this basic charter’, the senior-most military officer said that under the new proposals, the Air Force will have a centralised air defence command and its assets like combat aircraft will be split into two land-based theatre commands.

General Rawat said that air advisors will be appointed to two commands – on the western and eastern borders – who would ‘advise’ theatre commander on air operations.

Speaking after the CDS, Air Chief Marshal RKS Bhadauria refused to discuss the details of the internal deliberations on theatre commands, saying that the differences need to be resolved internally and need not be publicly discussed. Bhadauria, however, made it clear that the Air Force was not merely a supporting arm and a lot of different aspects go into planning an air operation.

“There is absolutely no question that we are for establishing these commands but we must get it right. It’s an important reform and we should be able to reach the next level of comprehensive national power that has more flexibility and not more boundaries”, he said.

The Air Chief added that each of the three services has its own doctrines and knowledge that needs to be brought in for a synergised result.

“It is not a supporting role alone, air-power has a higher role to play. In any of the integrated battle areas, a lot of things go into any air plan and these are issues under consideration,” he said.

Last month, a presentation was made to the defence minister and defence ministry officials who raised several questions on the proposed structure of the commands by the department of military affairs.

The Department of Military Affairs (DMA) then made a Committee including three vice chiefs and the defence ministry officials who again put up their reservations in writing in the first meeting.

The concerns raised by the ministry are yet to be answered in detail. (ANI)