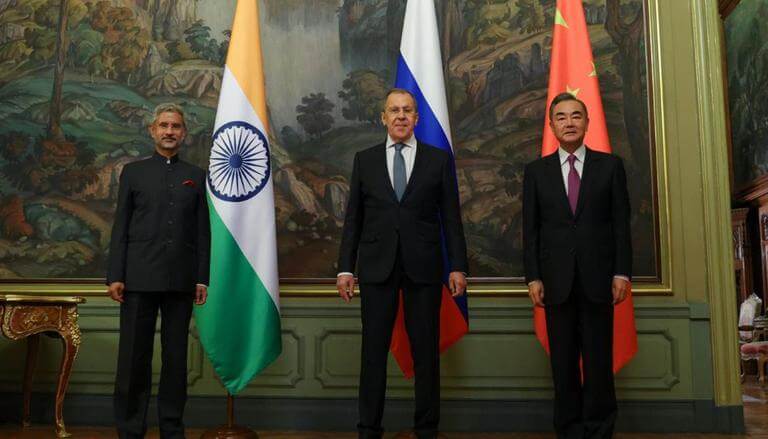 The Russia-India-China (RIC) dialogue, initiated by Russia, was originally intended as a counter to America’s triumphalism and unilateralism after the collapse of the Soviet Union that included NATO’s expansion eastwards to durably corner Russia geopolitically. The Yeltsin’s regime naiveté in believing Russia will be accepted as an integral part of a restructured European security architecture had got exposed. China’s spectacular rise had not occurred by then and the bilateral and global equation between it and Russia had no relation to what exists today. China then was the visibly junior partner, not the senior partner as it is today in all respects except the military.

For Russia, its long standing ties of friendship and geopolitical understandings with India and the latter’s equally long standing troubled ties with the US, made worse by our 1998 tests, made India a natural part of this trilateral dialogue to resist US hegemony. For the concept of multipolarity to counter America’s unipolarity to acquire substance, the bringing together of the erstwhile global power and the two largest Asian countries on a shared platform to project their own views on international governance was logical. A third factor that facilitated this dialogue was that India and China had begun to re-engage with each other after 1962, with steps to control the risks of border tensions with the  1993 and the 1996 Peace and Tranquility Agreement and Confidence Building Measures. This provided some rationale for India to participate in the RIC forum at Russia’s instance.

The initial Russian belief that bringing China and India on the same platform would facilitate both the improvement of India-China ties and the consolidation of a non-American grouping of major countries proved to be more optimistic than the reality warranted. This explains in part why Russia took the initiative to broaden the RIC to BRIC by including Brazil, with the objective still being the creation of a more widely based political forum to shape international discourse in which the US and the West were absent.

The RIC still continued to function as a dialogue forum though its core importance had got diluted with BRIC and even more with the formation of BRICS with South Africa’s addition. India’s nuclear tests and China’s vigorous international campaign against our decision had already exposed the limits of India-China understandings through the RIC dialogue. With India and the US settling their nuclear differences in 2005 and the steady improvement of their bilateral ties since then, including in the military domain, along with the failure of India’s efforts at the highest political level to make progress on border differences, put in question the political value of the RIC forum as a platform of three like-minded countries. This is even more the case with the sharp deterioration of India-China ties following China’s aggression in Ladakh.

While India still believes in and supports multipolarity, it is also on the assumption of a multipolar Asia, not one dominated by China with its overt hegemonic ambitions. India has made the point about Asian multipolarity publicly. Beyond that, the internal balance within the RIC forum has got disturbed to India’s disadvantage with China replacing Russia as the second most powerful country in the global system today and, as well, the strengthening of strategic ties between these two countries. In relative terms Russia is today much closer to China than to India, though Russia seeks to maintain neutrality on the issues dividing India and China. The other complication for us is that relations of both Russia and China with the US have deteriorated very sharply while India’s relations with the US have improved considerably. If the original RIC platform was intended to challenge US hegemony and promote an international system in which the views and interests of other powers also have weight, the fact of India’s much closer ties with the US today introduces a difference in perspectives between India and the other two partners on its core purpose.

That the recent RIC meeting in New Delhi was the 18th one shows that despite doubts about the intrinsic utility of the forum in the changed circumstances its continuation as a shared platform has some political value. For India it helps maintain its strategic autonomy, fosters its belief in multipolarity, politically nourishes its relations with Russia, provides a platform to exchange views and also express differences, and keeps a door open to China on non-bilateral issues. For Russia and China it encourages India to retain its “nonaligned” leanings and keeps in tethered to a non-western block.

In the public remarks made by Minister Jaishankar while chairing the 18th Meeting of the Russia-India-China Foreign Ministers, the most notable was his characterisation of India as a “contiguous” country to Afghanistan. This implicitly laid out in this forum our sovereign claim to Kashmir territory occupied by Pakistan and questioned the legality of the CPEC.

The 35 para joint statement issued on the occasion deals with regional and international issues in a non-contentious manner, without any recriminations against the US or the West as India would not have been comfortable with that. The need for strengthening an open, transparent, just, inclusive, equitable and representative multi-polar international system based on respect for international law and principles of the UN Charter, besides the need for reforming the principal organs of the UN has been emphasised, as has been  the importance of a timely, transparent, effective and non-discriminatory international response to global health challenges including pandemics, with equitable and affordable access to medicines, vaccines and critical health supplies.

As before, India is fobbed off with a patronising reference to India’s bid for permanent membership of the UNSC with the formula that diminishes us,  which we should henceforth dispense with : “Foreign Ministers of China and Russia reiterated the importance they attached to the status of India in international affairs and supported its aspiration to play a greater role in the United Nations.”

The inflated joint statement refers positively to BRICS, the SCO, the G-20’s leading role in global economic governance, ASEAN Centrality and the role of ASEAN-led mechanisms in the evolving regional architecture, including through fostering ties between ASEAN and other regional organisations such as the SCO, IORA, BIMSTEC and the Eurasian Economic Union. The para on terrorism states that “those committing, orchestrating, inciting or supporting, financing terrorist acts must be held accountable and brought to justice in accordance with existing international commitments on countering terrorism, including the UN Global Counter-Terrorism Strategy, relevant UN Security Council resolutions and the FATF standards”, without referring to any specific concerns of India or the other two countries. It is safe language that sounds right but brings nothing new to the table.

On ICTs to say that “technology should be used responsibly in a human-centric manner” is ironical given the manner in which China uses surveillance technologies to control its population. The issues of cyberspace are glossed over by simply referring to UN groups addressing it. The word “cybersecurity” is notably missing in the text. The document calls for WTO reforms and the normal functioning of a two-stage WTO Dispute Settlement system. How presumably India was able to include the following sentence that reflects the shared concerns our western partners is intriguing: “The post-pandemic world requires diversified global value chains that are based on resilience and reliability”. India was right in joining the others in noting- without mentioning the US- that “the imposition of unilateral sanctions beyond those adopted by the UNSC as well as “long-arm jurisdiction” were inconsistent with the principles of international law” .

The para on Climate Change reflects India’s positions on ‘Common But Differentiated Responsibilities’, the criticality of adequate finance and technology flows, judicious use of resources and the need for sustainable lifestyles, longer timelines for peaking of Greenhouse Gas Emissions by developing countries. Concern expressed over the possibility of outer space turning into an arena of military confrontation sits ill with the known development of hypersonic missiles by Russia and China.

The para on Afghanistan speaks of  the “rising concerns regarding dramatic change of the situation in Afghanistan”, calls for “a truly inclusive government that represents all the major ethnic and political groups of the country” and advocates “a peaceful, secure, united, sovereign, stable and prosperous inclusive Afghanistan that exists in harmony with its neighbours”. It calls on “the Taliban to take actions in accordance with the results of all the recently held international and regional formats of interaction on Afghanistan, including the UN Resolutions on Afghanistan”, besides calling for “immediate and unhindered humanitarian assistance to be provided to Afghanistan”.

The three Ministers reaffirmed the importance of ensuring that the territory of Afghanistan should not be used to threaten or attack any other country, and that no Afghan group or individual should support terrorists operating on the territory of any other country. This a significant part of the joint statement that shows that Russia and China are ready to put pressure on the Taliban together with India on some shared key concerns. Neither the Taliban nor Pakistan would be happy with this consensus reached at the RIC meeting.

The revival of the Iranian nuclear deal, the situation in Myanmar, the Korean Peninsula, the Gaza strip, Syria, Yemen, Libya are issues covered in the joint statement, reflecting essentially Russia’s position. China obtained its pound of flesh by obtaining support from the Ministers for the Beijing 2022 Winter Olympic Games that are likely to be politically boycotted by the West. 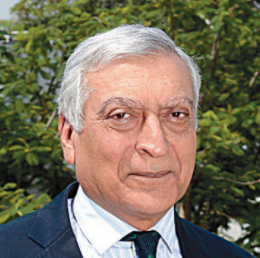 Jan 31, 2022
We can talk with China. We can talk with China with the oversight of other countries (Russia). But, I hope we do enter talks with the appropriate perspective. The Chinese delegates are all products of a stern, absolutist regime. They are used to immediate obedience, to meting out consequences for any disagreement (this is a country that has killed nearly 100 million of its own people in the previous 120 years). Indian delegates are - without a doubt - very intelligent. They are products of a democracy. They represent a foreign policy establishment regime that is pluralistic; dissent is allowed. They are aware that the Chinese enjoy absolute operational and strategic superiority in terms of their military, they are aware that China owns Pakistan and has a heavy presence in Gilgit Baltistan, that China has a lot of money, and seems willing to provoke US/west without much fear with their foxlike diplomacy. We must accept that China does not take us seriously, and will make outlandish demands (such as give them all of Arunachal, and cede all of Aksai chin, and then open our markets fully to their shoddy products). They have no notion, nor experience, with fair trade. They also happen to think they are better than Indians. What I mean is this: keep talking, but don't expect anything to happen. We will not surpass the US and West in our ability to hurt them, and they seem undeterred by the US and the West; i.e., we have no shot.

Dec 11, 2021
RIC should focus on the common threat faced by them of Islamic radicalisation. Create a common roadmap and strategy ...