The New-Breed of Protected Mobility Vehicles– Do They Fit the Bill? 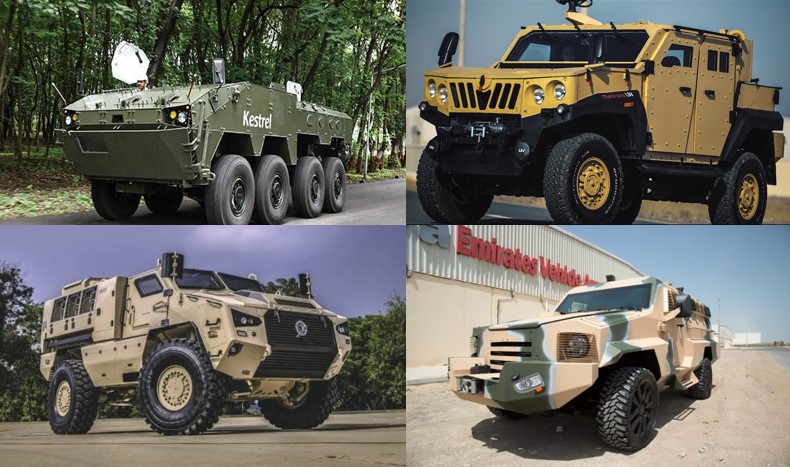 While the Future Infantry Combat Vehicle ( FICV) Program of the Indian Army (IA) (earlier covered in detail @ https://chanakyaforum.com/indias-futuristic-infantry-combat-vehicle/) aims to make the mechanized forces self-sufficient in tracked Infantry Combat Vehicles (ICV), including a significant fire-power component and adequate passive protection measures, it must be remembered that certain areas along India’s borders necessitate light-weight road-mobile/ all-terrain platforms with the principal purpose of troop carriage and reconnaissance. Such requirements are best met by wheeled armoured personnel carriers (APC) with an adequate crew-protection component and the option of ab-initio or retrospective weaponisation. The need for acquiring/ developing such platforms gained traction during the recent stand-offs with China in Eastern Ladakh, wherein the Chinese People’s Liberation Army Ground Force (PLAGF) had postured significant numbers of their Dongfeng Mengshi CSK 131 wheeled light armoured vehicles against our troops. In addition, PLAGF’s Dongfeng EQ-2050, a Chinese copy of the US Army’s HUMVEE wheeled vehicle, had also been deployed on the Chinese side- both these platforms representing the PLAGF’s significant wheeled troop carrier/ ground reconnaissance capability. Such wheeled mobility vehicles could also offer relatively better cross-country mobility and the advantage of light-weight, manoeuvrable fire-power platforms across the plains and obstacle-ridden terrain that pertain along India’s Northern and Western borders, as compared to the significantly heavier Armoured Fighting Vehicles in the IA’s inventory. These platforms, being lighter and more mobile than Armoured Fighting Vehicles (tanks) would also offer advantages with respect to faster deployability, reduced logistic burden, higher mean-time-between-failure and reduced fuel costs.

While a number of indigenous light utility/ light armoured wheeled vehicles and auxiliary/support vehicles aptly suited for multifarious roles including light attack, reconnaissance and mine-protection are being developed/ have entered operational service, the protected personnel carrier market, in specific, includes the four-wheeled M4 from the Kalyani Group, the TATA Wheeled Armoured Platform (WhAP-based on the Kestrel platform- jointly developed by TATA Motors, DRDO & British Firm Supacat) and the Straton Plus from Mahindra & Mahindra. The M4 is an indigenous iteration of the Mbombe-4 Next-Generation Armoured Combat Vehicle developed as a joint venture with the Paramount Group, a global aerospace & technology firm based in South Africa. It is capable of accommodating upto eight personnel. The M4 has been covered in detail @ https://chanakyaforum.com/kalyani-m4-all-terrain-mpv-for-army/ ). The Straton Plus is offered in the Light Armoured Vehicle   (LAV) and Light Tactical vehicle (LTV) versions. It is similar in appearance to the M4, but with a greater crew carrying capacity of 12 personnel.

APCs are defined as mobile platforms for transportation of personnel which, as a rule, are lightly armed with an organic or integral combination of small calibre cannon, machine gun(s) and /or a grenade launcher system. These platforms offer protection against small arms rounds and /or artillery fire.

In the extant case, while the requirement of firepower and mobility in ICVs is being met by the FICV program, the three platforms mentioned above are being looked at for the principal purpose of providing protected mobility to the crew and mounted Infantry into/ in close proximity to the Tactical Battle Area (TBA). The importance of transporting fighting personnel into battle cannot be over-emphasised, especially in areas characterised by high-altitude and restricted terrain, wherein reinforcements in battle would be at a premium, mainly due to the difficulty of transporting personnel into the TBA from outside the theatre/ conflict zone. Reserves would therefore be limited and would need to be pre-positioned in close proximity to the TBA. 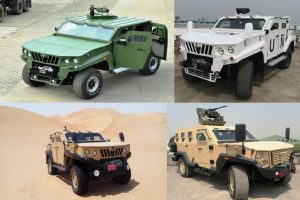 While the Doklam and Galwan crises of June 2017 & May 2020 respectively underlined the need for agile, mobile and protected platforms for movement of troops to contain rapidly escalating situations, the process of evaluation of such platforms was wont to follow the convoluted trial route, commencing with evaluations by the Original Equipment Manufacturer followed by user trials, usually on No Cost No Commitment (NCNC) basis, wherein capital procurements by the MoD are preceded by trial evaluation of the equipment by the buyer, with the  buyer (Government) neither bearing the cost of the trials nor being committed to acquire the said equipment post such trials. However, this routine process suffers from the burden of a large time lag between commencement of the acquisition process (including formulation of Service Qualitative Requirements [SQRs], among other formalities) and operational induction of the equipment, meaning that the Armed Forces are bereft of such equipment for a protracted period (read more about the defence acquisition process @ https://chanakyaforum.com/revamping-the-defence-acquisition-process-a-revolution-in-procurement-affairs/). Accordingly, some platforms were subsequently evaluated for performance in high-altitude terrain, where a number of observations were raised, as these platforms did not meet the laid down performance parameters.

In light of what at best, can be described as a sensitive situation along the Northern Borders and the imperative and urgent need to provide force-multiplying equipment in terms of Protected Mobility Platforms (PMP), the IA has aptly decided to undertake limited acquisition of platforms from all three vendors as above under the Emergency Procurement Procedure (EPP) (incidentally brought into vogue post the Galwan crisis), in order to expeditiously induct these PMP for operational use. This revolutionary process would also allow the IA to formulate apt SQRs while carrying out extensive evaluation of these vehicles in an actual operational setting, as a precursor to further capital procurement of PMP.

As is reliably learnt, these platforms would form company sized Quick Reaction Forces (QRF) with approximately 20 PMP each, with an equitable representation of all fielded equipment. This would also allow the IA to carry out comparative evaluation in order to shortlist the most suitable product for formulation of SQRs, in what may be loosely termed as a ‘reverse acquisition process’.

Apropos, an order for 27 M4 for a contract amount of Rs. 177.95 Crores was placed in February 2021. Similar limited procurement orders are also believed to have been placed for the Kestrel/ WhAP and the Straton Plus.

Tabulated below are the profile/ performance characteristics of all three PMP undergoing in-service evaluation by IA:- 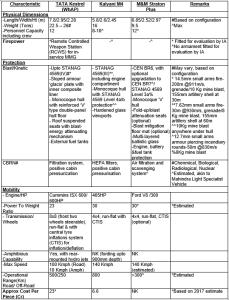 Note:- Details as available ex-open source have been quoted. While all platforms are capable of mounting a turret/ RCWS, presently the Tata Kestrel has been mounted with an RCWS for Medium Machine Gun for the purposes of evaluation.

The urgent need for protected mobility platforms in the ‘skirmish’ zones that now prevail along our borders, with specific reference to Eastern Ladakh, cannot be over-stated. This urgency has fortunately been aptly appreciated by the IA and limited procurement that has been resorted to under the EPP should well meet the twin aims of immediate force-enhancement and provision of an in-service testbed for evaluation of these platforms. Such comparable evaluation will allow apt formulation of realistic qualitative requirements or desired performance parameters and provide the IA an ‘on-ground’ insight into the quantitative requirements as well.