The Importance of Tibet – ‘Ethnic Work’ in Progress 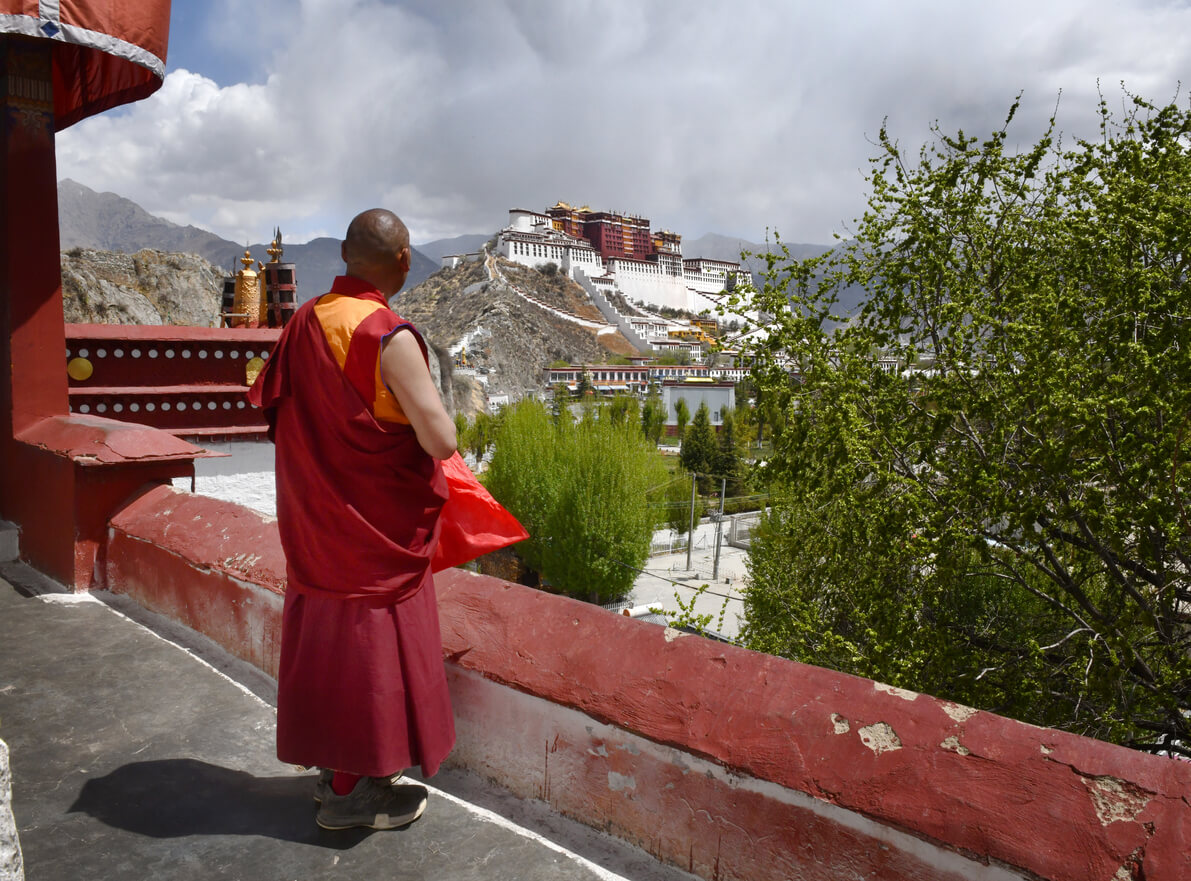 One remembers a Party Secretary, who later became Chinese President (and General Secretary of the CPC), who during his three years posting in Tibet tried his best to avoid to fly to Lhasa; the young Hu Jintao did not like the place. He once told a journalist that he “disliked Tibet’s altitude, climate and lack of culture”. During his tenure, he shuttled between Lhasa and Beijing where the real power was; there was a common joke about Hu amongst Tibetan cadres: ‘Where is Hu?’ The answer was: ‘Hu is in Beijing Hospital.’ He often reported sick each time he was going to leave Beijing!

That was some thirty years ago.

Today, ‘important’ cadres have to make sure that they are seen in Tibet.

The ‘Emperor’ himself, the ‘Core Leader’, Xi Jinping paid an ‘inspection tour’ of Central and Southern Tibet between July 21 and 23; it was his first visit to Lhasa after a gap of ten years, though he had visited the Northeastern province of Amdo (today Qinghai) in June.

Five members of the Politburo accompanied the General Secretary (concurrently serving as Chairman of the all-powerful Central Military Commission).

It is interesting to look at Xi’s delegation; the composition of a delegation is a clear indicator of the purpose of the ‘inspection tour’, especially in a system where the information is entirely monitored by the State and where watchers are left to read signs.

First, Ding Xuexiang, CPC’s General Secretary and a Secretary of the Party Secretariat; he usually accompanies Xi on his visits/inspection tours. His role is to make sure that decisions are implemented and that there is a concrete follow-up.

Also regularly seen during Xi’s tours is Liu He, Vice-Premier and member of the Politburo. Liu further serves as Director of the Office of the Central Financial and Economic Affairs Commission. Liu He is Xi’s trusted lieutenant, who has several times been used to fill up the ‘perception’ gap between China and the US. He takes care of the financial aspects of the visit.

Yang Xiaodu is the Director of the National Supervisory Commission and also Deputy Secretary of the Central Commission for Discipline Inspection (CCDI) which makes sure that everybody follows the line of the Party. We shall see in a few months if a few heads roll; if it happens, Yang’s hand will certainly be behind.

One noted the absence of another Politburo member and old Tibet hand: Hu Chunhua; the Vice Premier was not on board for the visit. He had served in Tibet from 1983 to 2007 and is the only member of the Politburo who can fluently speak Tibetan. Probably, the emperor does not like to be in the shade.

Then Chen Xi, also a member of the politburo and head of the Organization Department and like Xi Jinping a graduate from Tsinghua University (they know each other since that time). Chen is President of the Central Party School and Vice-minister of Education and Vice Chairman of the China Association for Science and Technology. Xi clearly wants to bring modernity …to the borders with India.

The presence of General Zhang Youxia, Vice-Chairman, Central Military Commission (CMC), also member of the politburo is explained by the ‘important’ meeting between the CMC Chairman (Xi) and all the officers of the Tibet Military District (TMD), including the Commander and the Political Commissar of the Western Theater Command or WTC (based in Chengdu) which had a new Commander, Gen Xu Qiling. The WTC not only looks after Tibet but also the Ladakh front (incidentally Gen Xu Qiling lost his job since then, but we shall come back to this).

The CMC Chairman was certainly briefed in detail about the borders with India when he met the top brass of the Theater Command.

To this list of six members of the politburo, one should add He Lifeng, Minister in charge of the National Development and Reform Commission (NDRC), the equivalent of our Planning Commission. His presence means that a number of large projects, including the railway line between Lhasa and Chengdu and the Giga hydropower plants on the Yarlung Tsangpo will soon be undertaken. Xi was personally explained the implications of these projects while on the banks of the mighty river, which becomes the Siang and the Brahmaputra in India.

The People’s Daily resumed the tour’s objectives: “implement the Party’s strategy for governing Tibet in the new era and write a new chapter in long-term stability and high-quality development of the snow-covered plateau.” This refers to the 7th Work Forum held in August 2020 which defined the development policies for Tibet for the five next years, particularly the Sinicization of Tibetan Buddhism.

But undoubtedly, the emphasis was the military and economic development of the borders with India. An indication: in the Annual Report presented by the Tibet Autonomous Region’s government a few months earlier, the word ‘border’ was mentioned 54 times, while ‘Dalai Lama’ only once.

Xi Jinping wants to change the organization of the border for good; we shall see how.

Visit of Wang Yang in Tibet

But that was not all; on August 19, a central delegation led by Wang Yang, a member of the Politburo’s Standing Committee and chairman of the National Committee of the Chinese People’s Political Consultative Conference (CPPCC) arrived in Lhasa to attend the 70th anniversary functions. Wang is No 4 in the Communist pantheon.

One can ask, why not celebrate the so-called liberation when the ‘Core leader’, Xi Jinping visited Tibet in July. I have no answer to this.

Wang had been ‘entrusted’ by Xi Jinping to “lead Beijing officials in Tibet along with veteran senior Tibetan officials” to Tibet; a cohort of old Tibetan collaborators was honoured by the visiting VVIP.

Wang Yang was accompanied by Admiral Miao Hua, a CMC member, who will probably be the lone uniformed member to survive when the term of the present CMC comes to an end. It was the first visit of a three-star admiral in Tibet.

Did Wang and Miao knew that a few days later, Xi would change the commander of the Western Theater Command for the third time in nine months and Xu Qiling, who had met Xi a few weeks earlier, would be replaced by General Wang Haijiang, a former commander of the Tibet Military Region. Probably not.

The visit has also to be seen in the context of the CPC’s 100th anniversary and the 70th anniversary of the so-called Liberation of Tibet (read ‘invasion’).

From September 2 to 4, Li Xi, Party Secretary of Guangdong and Ma Xingrui, Governor of the same wealthy province, visited Lhasa and Nyingchi “to earnestly study and implement the important speeches and instructions of General Secretary Xi Jinping’s inspection tour …[and] implement the spirit of the Central Ethnic Work Conference.”

Guangdong province economically helps Tibet, which for decades was considered remote and backward and out of range for modernization. The instability of the restive province and the importance of the border with India have changed all this.

From September 5 to 6, Cai Qi, also a politburo member and Beijing Party Secretary “led a Beijing delegation to Tibet to research counterpart support work and further promote exchanges and cooperation between Beijing and Tibet,” said a release.

Finally, Wang Chen, vice chairman of the Standing Committee of the National People’s Congress, was in Tibet from September 5 to 8 to be sure that the region had “a firm sense of Chinese national community” and to preach “for long-term stability and high-quality development of the snowy plateau.”

Ten visits of politburo’s members (plus two CMC members) have never been seen in the past.

This word has an ominous meaning. It practically means ‘sinicization’ of the Roof of the World, which includes building new ‘mixed’ villages on the Indian border, recruiting a large number of Tibetans in the PLA, and giving Chinese characteristics to Tibetan Buddhism.

On September 1, Xinhua had reported that the Central Party School started its Fall Training Class for Young and Middle-Aged Cadres. It was attended by Xi who gave an ‘important’ speech (his speeches are always ‘important’).

Xi recommended that cadres have a fighting spirit in the current situation; he said that at the present moment, “the world’s unprecedented changes have been accelerating and the great rejuvenation of the Chinese nation has arrived at a critical period. The risks and challenges that the CCP faces have increased significantly. It is impractical to dream of always living in a peaceful environment without taking on any struggles.”

He advised the young cadres: “dare to fight … at any time, Communists should have the bones and courage not to be afraid of anything, and not to yield to anyone.”

All this is quite ominous for India’s Northern borders.

Sep 12, 2021
The active recruitment of ethnic Tibetans in the PLA could prove to be an advantage to India. Tibetan loyalty towards China is basically at gunpoint be it economically or militarily. If India could work on demotivating these Tibetan soldiers, it could work in our favour in any future battle.