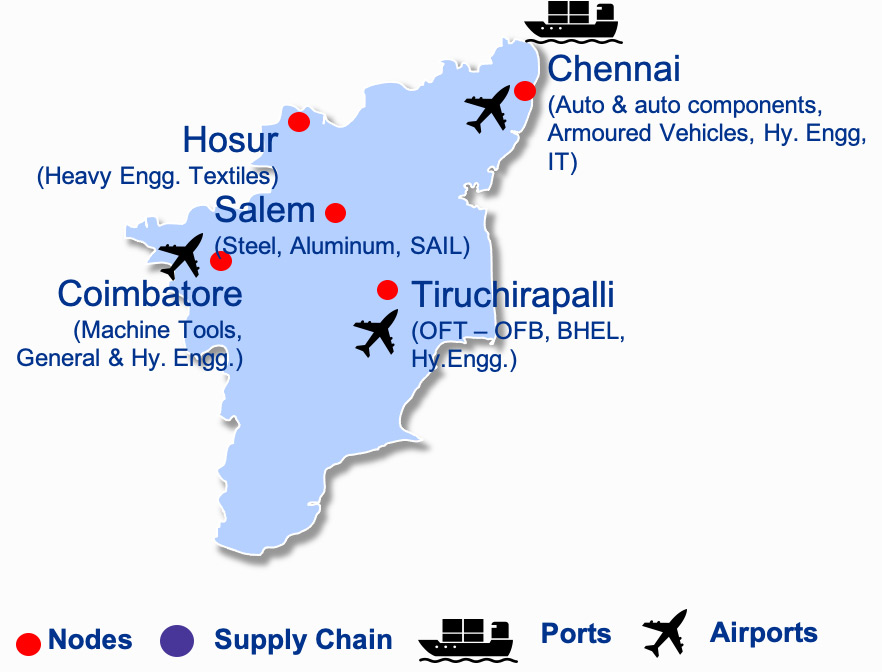 Achieving strategic independence in defence is an Indian necessity. It is a hydra headed problem. Defence budget and expenditure have reduced drastically. Warfare will be more non-contact and technocentric. Threat perceptions will change after the current Sino Indian clash. Import of defence equipment is on a downward trajectory. Self-sufficiency in defence will be the single most important constituent of strategic independence and Atma Nirbharta. In such conditions indigenous industry must step up. In future, Industry must not only meet our demands but become export oriented. In this context the Defence Corridors assume significance. Defence Industrial Corridors have an important role to play in providing a basic frame work for growth of defence industry. They should be able to attract domestic and foreign investment, coordinate activities for provision of goods and material and facilitate setting up and operation of defence oriented units. The Defence Corridor concept is a tried and tested model internationally. It needs to be suitably adapted to Indian conditions.

TANDICO (The Tamil Nadu Defence Industrial Corridor) was formally inaugurated by the Hon’ble Union Defence Minister, on 20th Jan 2019 at Trichy. Five industrial nodes viz. Chennai, Hosur, Salem, Coimbatore and Trichy are envisaged. Numerous MSMEs are already operating in these clusters. TANDICO will facilitate and create new defence production facilities and clusters with necessary testing and certification facilities, export facilitation centres, technology transfer facilitation, etc. Assessment of nodes and their suitability has been carried out based on well-defined selection criteria. Currently many companies and units are already oriented to defence production. The details of these companies are tabulated below. Several DPSUs and private industries have announced and committed investment plan for Rs.31.24 Billon for growth of the TANDICO. DRDO and IIT Madras will be the knowledge partners.

The Tamil Nadu government has evolved and issued an Aerospace and Defence Policy. It has spelt out considerable incentives and concessions over a two year period which is tabulated below.

A Common Facilities Centre is being established in the Corridor. It will consist of a Product Design Centre, a Domain Exploration Centre, a Prototyping & Integrated Advanced Manufacturing Centre, Maintenance, Testing and Inspection Centre and a Skill Development Centre. Additional facilities being set up are an Incubation hub, a MSME facilitation Cell, an Integrated township, Logistics assistance and other Supporting infrastructure. It will be a major support ecosystem for OEMs, Tier 1/ 2 suppliers and MSMEs.

Defence Testing Infrastructure is lacking in the country. In order to address this issue, establishment of defence testing infrastructure is being given necessary focus.  Effort is underway to setting up Greenfield Defense Testing Infrastructure in TANDICO with suitable financing from the Government of India. It will provide easy access to meet the testing needs of the domestic defense industry. Ultimately the Infrastructure will have the status of an International Accredited Testing center. The scheme has an outlay of Rs 400 crore for creating state of the art testing infrastructure. It is envisaged to set up test facilities in partnership with private industry. Up to 75% government funding in the form of ‘Grant-in-Aid’ will be provided to the projects. The remaining 25% of the project cost will have to be borne by the Special Purpose Vehicle (SPV) whose constituents will be Indian private entities and State Government. Testing will encompass many verticals. These include Testing facilities for Drones / Unmanned Aerial Vehicles (UAVs)/Remotely Piloted Aircrafts (RPAs), EMI/EMC Testing for Radars, UAVs/RPAs and Electronic/Telecom equipment, Rubber Testing for Defence and Aerospace Sectors, Radiated Noise and Shock Testing, Electronic warfare system testing, Software testing, Specialized Test-Driving Tracks, Ship Motion Testing Test, Test Facilities for Aerospace Industry , Ballistic and Blast Testing Facilities, Environmental Test Facilities  and any other area in Defence manufacturing where testing infrastructure is lacking.

An Aerospace & Defence Park is being established at Chennai.  It will be a One Stop Solution for the Aerospace & Defence ecosystem. It will be spread across 250 acres of land in the Sriperumbudur Industrial Park. It will support the growth of the Aerospace Industry with internal infrastructure including roads, storm water drainage, electricity, etc. The intent is to create a Defence and Aerospace manufacturing hub of international standard. It will provide a technological and solution environment for the industry to prosper. It will have an initial capacity for at least 50 Industrial units to operate. The Park will be well-connected and set up to Global standards. The layout is as shown below. Those who are interested in operating from the park may approach the Tamil Nadu government.

TANDICO is being established and progressing along the right lines. To some extent progress has been dislocated due to the COVID 19 pandemic. However activities have now picked up and things are looking up. Notwithstanding this, there are some issues which are being considered for the future. These issues are highlighted in succeeding paragraphs.

The primary stakeholders in TANDICO are visualised to be the MOD, Govt of Tamil Nadu, and Industry, Consumers, Financial institutions and Knowledge Centres. A structure of participation and work must be evolved with an equity model like the TIDEL Park in Chennai so that it is a self-sustaining and growing body. It should have an organisation and hierarchy suited to the purposes mentioned earlier. MHA and NDMA must be incorporated as secondary stakeholders in TANDICO. At some stage ISRO and DAE will also have to be co-opted. All these need mil grade or near mil grade sourcing.

It is also visualised that a certain amount of R&D must commence in TANDICO with the assistance of DRDO, ISRO, DAE, CSIR and IIT Madras. Currently it can commence with industrial process research and later expand into certain niche areas. Might appear farfetched but one must have a vision.

Facilitation must be done largely by MOD. Facilitation will be at multiple levels. At one level MOD must harmonise the defence procurement and defence production imbalance. Defence Procurement drives Production. Hence a certain amount of assured clairvoyance in procurement must kick in. At another level a certain amount of revenue procurement, sourcing by Tier 1 suppliers or sourcing for offset obligations from the TANDICO must be mandated. Also, some suitable percentage of the product of the Corridor has to be purchased by MOD/DPSUs/OFB on a mandated basis.

Sustainability will be further facilitated by incorporating MHA, NDMA, DAE, ISRO and other national players who will have a stake in the TANDICO ecology. Their leverages should also contribute to strengthening TANDICO.

The prime Beneficiary should be the Indian Armed Forces who should get much needed systems, components etc, at costs and delivery schedules much better than what they are forced to import today.

In a wider perspective TANDICO will contribute to job creation, skill development, and economic growth. More importantly in the current geopolitical situation achieving Atma Nirbharta will be hugely facilitated by a successful TANDICO. That must be our national goal.

The views expressed are of the author and may or may not represent the views and policies of Chanakya Forum.