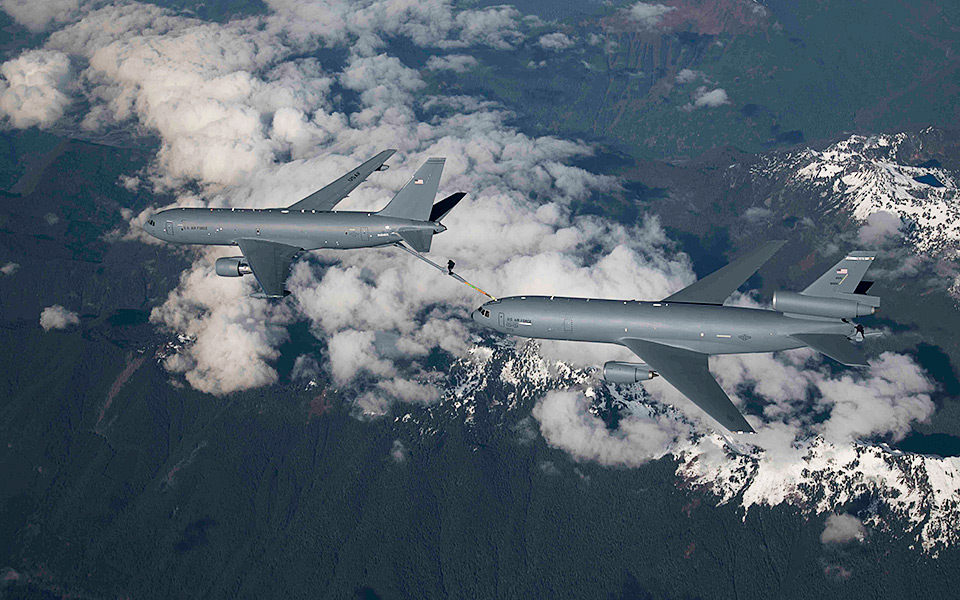 Access to modern off-centre special mission warplanes, the Force-Multipliers, is all the more important for any Air Force for gaining air superiority over its opponents in modern-day air battles. An Aerial Warfare Force must have the capability to assemble outstanding air power at the points of decision in time and space to achieve strategic goals. These special mission aerial vehicles play a key role in achieving this massing process by boosting the total force capabilities like combat potential, thereby enhancing the impact and effectiveness. Hence, they are indispensable for providing an asymmetric advantage at operational, strategic and tactical levels of war. Flight Refueling Airplanes (FRAs) are accepted as one of the star force-multipliers in the world of air power apart from Airborne Early Warning and Control (AEW&C), strategic transport aircraft and Unmanned Aerial Vehicles (UAVs).

Given their significant fuel-carrying capacity, all major Air Forces in the world today assign these giant airborne tankers to rapidly deploy their fleets of fighters, cargo planes, bombers, helicopters and even AEW&C warplanes to the regions where they are needed. An Air-to-Air Refueller airplane considerably boosts the endurance, range and loitering time of the fleet by off-loading combustibles, thus allowing airborne platforms to achieve significantly better combat ranges and carry additional ammunition during take-offs at higher altitudes. In-flight refuelling enables military aircrafts to execute multi-mission strikes during a single sortie. Similarly, other Force Multipliers like AEW&C assets can be better exploited in terms of endurance as well as their Intelligence, Surveillance and Recce (ISR) capabilities by suitably grouping the Air to Air Refuelers (AAR) in the mission package.

Nowadays, whether it is fixed-wing warplanes, UAVs or slow-moving helicopters, the in-flight refueling capability is a standard feature, and a key requirement worldwide. Given these facts, it is rather alarming that the Indian Air Force with over 1,500 aircraft has just six operational airborne tankers at present. Indeed, it is an area where the Air Force faces critical capability shortfalls, at least a dozen of these range-extender aircraft are needed to support the fleet of over 550 aircraft configured with AAR capability. In the inventory of Indian Air Force, several aircraft including Su-30MKIs, Mig-29UPGs, Mirage-2Ks, Sepecat Jaguars, C-130J Super Hercules, ERJ-145 Netra AEWs, A-50EI Phalcon and newly inducted Rafales as well as  LCA Tejas (FOC variants) have already been fitted with IFR probe for AAR purposes.

The Air Force AAR missions presently are being performed by six Soviet four-engine Ilyushin IL-78MKI tankers inducted in the early 2000s. It is a modified variant developed from Ilyushin IL-76MD strategic airlifter. These Uzbekistan-built special-purpose airplanes are fitted with spindle-shaped Israeli fuel transferring systems. They are capable of carrying a maximum of 74-ton fuel and can refuel 6-8 aircraft in a single mission. However, these 15 plus years-old Soviet aircraft are now facing critical maintenance and serviceability issues. IAF needs to keep the available warplanes on station for a longer time to offset the reduction in numbers of their frontline squadrons by deploying a decent-sized range-enhancing aircraft fleet, wherein comes the importance of mid-air refueling, a crucial capability void that needs to be fixed in the near future.

To address this shortfall the Air Force has now embarked again on its long-running quest to acquire a batch of at least six air refuelers to supplement its IL-78MKIs tankers line, after two failed attempts in the past decade. This time, IAF is working on both short and long term plans. Under this fresh hunt, IAF is now keen to acquire twin-turbofan powered tankers to trim maintenance, high operating cost and serviceability related issues. Hence, the four-engine aircraft such as IL-78MKIs would not be able to take part in IAF’s new tanker quest. Besides, it is also seeking reliable partners for leasing at least 2-3 strategic tankers from the West under its short term plan.

This new condition to acquire and use military hardware on the lease has already been added in Defence Acquisition Procedure 2020 (DAP-2020). Two global aerospace giants — Boeing (USA) and Airbus (Europe), are the only suppliers for the IAF tender for six multi-role tanker aircraft. Talks are progressing with both the global companies for leasing these strategic assets— with Boeing pitching in with KC-46A Pegasus, a multi-role tanker-transport aircraft. Presently, Air Force is also seeking leasing quotes for these advanced tankers.

Interacting with Chanakya Forum by email, Michael Koch, Vice President, India, Boeing Defense, Space & Security said, “As India expands its Air Force and increases its defensive capabilities, the KC-46 is the perfect choice for a multi-role tanker-transport aircraft. The brand-new KC-46 is designed from the ground-up to be a combat-ready tanker. This means that unlike other tankers, it can operate closer to the fight, covertly and with the ability to protect itself. The recent contract award from the U.S. Air Force (USAF) for an additional  27 KC-46A Pegasus aircraft is a testament to the versatility of the air-refueling platform by Boeing which is enabling the U.S Air Force to provide in-flight refueling services to bombers, fighters, airlifters, surveillance aircraft, and other aircraft flown by the U.S. military. Recently, Japan became the KC-46 program’s first international customer and is scheduled to receive its first jet this year.”

Recently, Boeing has once again offered its advanced KC-46A Pegasus to IAF, a model of KC-46A was also displayed by the Boeing at the Aero India show in February 2021, showing their intent in supplying the aircrafts. Apart from the AAR role, the highly innovative and flexible multi-mission refueling airplane from Boeing can also transport troops and cargo on the battlefield. The refueling aircraft is meant to replace older KC-135 Stratotankers of the United States Air Force (USAF) which will initially induct a fleet of 179 KC-46A tankers. Japanese Air Self Defence Force (JASDF) will be the first foreign customer to induct this Boeing-767 based tanker aircraft. The IAF tender for six refueling aircraft is crucial for the US aerospace company as it sees India as a long term partner. The capabilities of the Boeing AAR include: 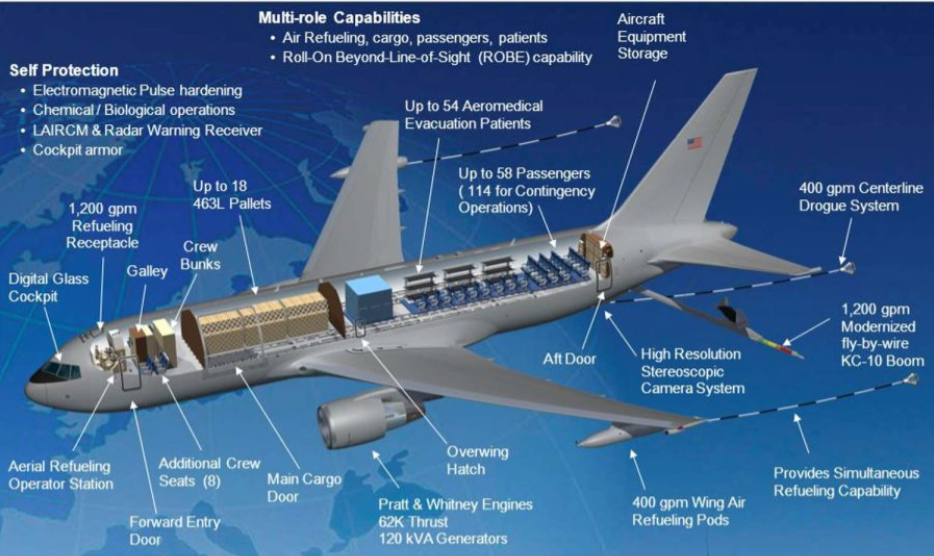 Airbus MRTT (multi-role tanker transport) has already taken part in the previous IAF tenders and shortlisted, but then rejected each time over budgetary concerns. Though Airbus giant multirole tanker is the most capable and largest refueling asset with an exceptional fuel-carrying capacity of up to 111 tons, India has to weigh in both capability as well as budget to meet its requirements. Boeing’s KC-46 can operate out of both big and small airports. This means that operational cost will be less compared to others. It is more of a combat tanker capable of handling multiple roles in combat zones.

Interestingly, aside from Airbus and Boeing, Israel Aerospace Industries (IAI) has also rendered its converted Boeing 767-200ER multi-mission tanker transport (MMTT) aircraft to IAF, an aircraft with the capability of performing AAR missions. The Boeing passenger airplane is converted into an MMTT asset by IAI’s Bedek Aircraft Division, which has already supplied a converted B767 MMTT to Colombian Air Force.

This year, the MoD has started addressing the issues of falling numbers of IAF warplanes including fighters, transport aircraft, ISTAR and AEW&C planes. French-made Rafale multi-mission jets have already been inducted by the Air Force, and all contracted 36 aircraft will be operational with IAF by the next year. Besides, IAF will induct 83 Indian-made LCA Mk-1As, an advanced iteration of LCA Mk-1 fighter jet equipped with enhanced capabilities like AAR, AESA radar, BVR capabilities and EW suite. India has been discussing a separate deal with Russia to procure 33 Russian-made fighters (21 Mig-29UPGs & 12 Su-30MKIs).

In response to our query on the capability enhancements which KC-46 would bring in for Indian Air Force, Mr Koch mentioned, “With the Indian Air Force’s expeditionary status, the air refueler of the type of KC-46 has already become a necessity. The IAF is enhancing its operational reach by enabling most of its aircraft and helicopters for mid-air refueling. The most reliable and economical tanker to operate, purpose-built, KC-46 will provide India with the combat capability IAF needs for sovereign operations and will also serve as an aircraft to move people and material. Pegasus is the best choice for today and decades to come.”

In addition, a Rs 10,500-crore DRDO program for developing six indigenous A320-based AEW&C jets has also been approved by MoD recently. Overall, IAF will be inducting nearly 300 aircraft by the end of this decade. Air-to-Air Refueling (AAR) capability will be force-multiplier for these IAF future assets, hence, it is now imperative to address this extremely vital range-extender capability shortage. Strategic Tankers like Boeing-made KC-46A Pegasus will be a vital asset for the Indian Air Force in its capability building plans and modernisation. IAF could also explore a fresh option to lease these refueling aircraft from global commercial tanking services as demonstrated by the US Air Force.