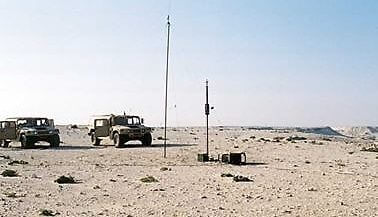 In the race for advancement of military capability, it sometimes occurs that the advantages of time-tested technology are overshadowed by the inexorable push for equipment that is more readily and suitably adapted to functioning in a fluid, mobile and adverse conflict environment. This statement would hold good for the entire scan of military equipment and would also include Artillery weapons and counter-bombardment or counter-Artillery technology. The Sound Ranging (SR) Systems, used for location of enemy Artillery, were one such victim in this contest, with many Nations giving up this operationally well-heeled locating asset for more modern and significantly costlier technology.

While maritime use of SR takes the form of Sound Navigation and Ranging (SONAR) systems, which use sound waves to locate objects underwater, SR is a proven method for locating enemy Artillery by aptly calculating the time and distance of such a source from the emanated sound when the weapon is fired. Some definitions which capture the essence of SR are given below:-

‘A method for determining the distance between a point and the position of a sound source by measuring the time lapse between the origin of the sound and its arrival at the point’.

The devastation wrought by Allied and Axis Artillery in World War I saw the advent of multifarious methods of locating the adversary’s Artillery, which included reconnaissance by aircraft, Flash Spotting (a method wherein several deployed observers measured the direction & distance to the flash emanating from enemy Artillery guns and the location of the weapon was then calculated by ‘intersection’ of these readings) and SR. Due to the inaccuracies of spotting and the disproportionate costs and effort involved in aerial location, SR proved by far to be the most reliable, cost-effective and accurate methodology of Artillery weapon location for a long time thereafter.

SR evolved rapidly in the era of the World Wars commencing with the first operational fielding of an effective SR system by the British in World War I. The German and French were soon to follow, with the latter achieving the significant breakthrough of developing the ability to record gun sounds on a photographic film. Another development was the necessity of deploying Advanced Posts (APs) or Listening Posts (LPs) ahead of the SR system towards the enemy, to ‘cue’ the switching on of the microphones for capturing the sound of gunfire. Deployment of APs and LPs was necessitated due to the reaction time required to activate the SR systems. The inter-World War period saw the development of wireless capability for connecting the microphones to the recorders in the CPs. World War II saw the British develop the capability to connect the microphones to a single cable, thus obviating the need for extensive and time-consuming laying of multiple communication cables. Both the British and US Armies made extensive use of SR technology, a testimony to which is the large number of SR units that were raised during and after the War in both Armies. SR was also used effectively during the Korean and Vietnam Wars, with the latter witnessing the development of robust radio-links and the capability to remotely activate deployed microphones from the APs. Subsequent developments in computing technology also allowed for automatic calculation of enemy Artillery coordinates without the need for extensive and time-consuming graphical plotting. 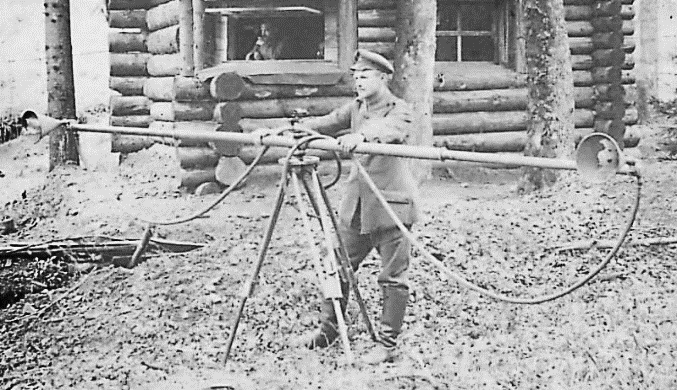 What are the Essential Components of a SR System?

A SR system would necessarily need to include the following:-

The difference in times of receipt of the sound allow the SR system to compute the bearing to the sound source. A number of such bearings from different microphones, whose locations have earlier been surveyed and recorded,  can be used to work out the location of the sound source by carrying out intersection of such bearing lines from each microphone location on a SR board or a digital map within the computing system. This location can then be relayed to own Artillery CPs / Fire Direction Centres for retaliatory fire.

What is readily apparent from the above is that any SR system is passive  and does not emit radio/electromagnetic (EM) waves, unlike other weapon locating radars (WLR) (read about the SWATHI WLR in another article @ Chanakya Forum https://chanakyaforum.com/swathi-wlr-aatmanirbhar-in-elusive-weapon-locating-capability/ ). It also evidently consumes minimal power as the microphones are only switched on once the LPs/ APs hear the sound of fire. 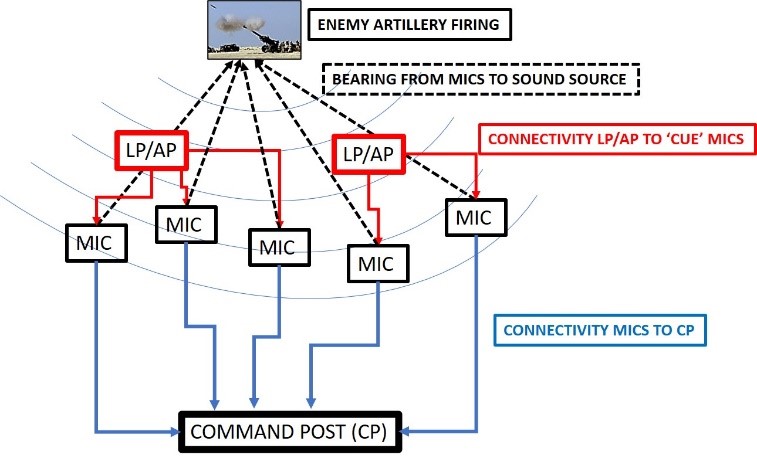 Depiction of Functioning of a SR System

What are the Advantages of a SR System?

It must be understood that the ideal architecture for weapon location must use a combination of active EM detection (WLR) and passive acoustic detection (SR systems). Such a combination would accord redundancy in weapon locating capability such that either of the systems would continue to work if the other is neutralised or rendered ineffective due to equipment failure/ enemy action. A combination of active and passive devices would also allow durability/ flexibility of operation in different weather and terrain conditions. Combined employment of WLR and SR systems would also allow greater/gap-free coverage of the concerned frontage for uninterrupted enemy Artillery locating capability. Some distinct advantages of employing a combination of such systems are:-

SR Systems in Operation the World Over

The Indian Army(IA) employed the indigenous SR System SRS 1A, which has now been declared obsolete. A Request for Proposal (RFP) was reportedly floated in January 2001 for procurement of 15 SR Systems, which unfortunately did not materialise.  India’s weapon locating capability, therefore is now restricted to the 40 indigenous SWATHI and US made AN/TPQ 37 WLRs in the inventory, numbers which are clearly inadequate for pan-frontage weapon locating capability. India should therefore aim to acquire/ develop a flexible and durable SR system to augment the IA’s weapon locating capability along our borders. A number of options are available with many vendors in the fray. Some SR Systems currently in vogue globally are profiled in succeeding paragraphs. 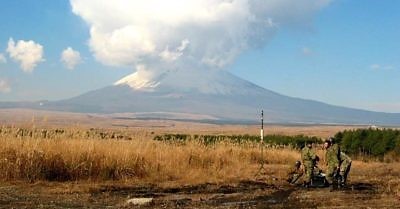 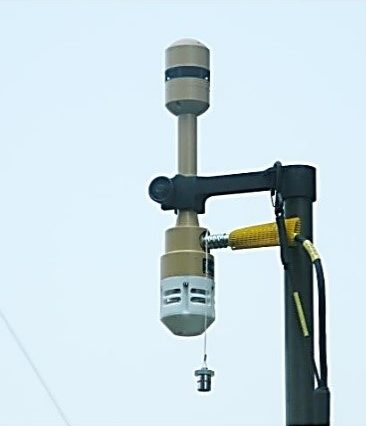 AZK-7M. This is a Russian SR system used to locate enemy guns/ mortars and also direct own Artillery fire onto enemy targets. The AZK-7M consists of one CP and three base points (BP), each carried in a Ural Truck. The functions of each BP are to deploy two sound stations (SS), with each SS consisting of three microphones with power supply and connected to the CP over a radio or cable link.  The system can locate mortars/ guns upto distances of 8 km/ 16 km respectively, upto an accuracy of 1% of range within 15 seconds. Three BPs can be deployed over a frontage of 12 km. 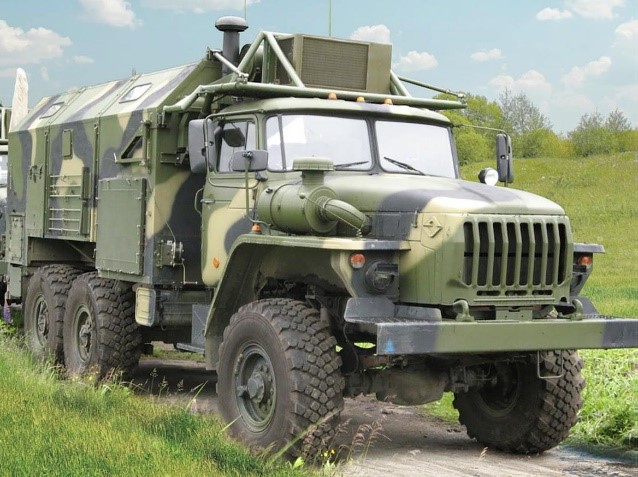 Polozhennya-2. This Automated Acoustic Weapon Locating System (WLS) from Ukraine is an evolved version of the AZK-7M. The system can locate mortars, artillery guns and rocket launchers. It is modular, with an autonomous power plant and can be mounted/ carried on any suitable vehicle, including Armoured Personnel Carriers. The system is equipped with a weather station for accurate meteorological data. It consists of three acoustic arrays with three microphones each, separated by 3 to 8 km to give omnidirectional coverage. Each acoustic array has a portable combined GPS/Russian GLONASS receiver for self-location and is connected to the CP using a field cable or a radio network. The system is available in different mission-specific configurations. It can even locate low-intensity gunfire up to 35 km within 5 seconds  and can correct own Artillery fire up to a range of 15 km. 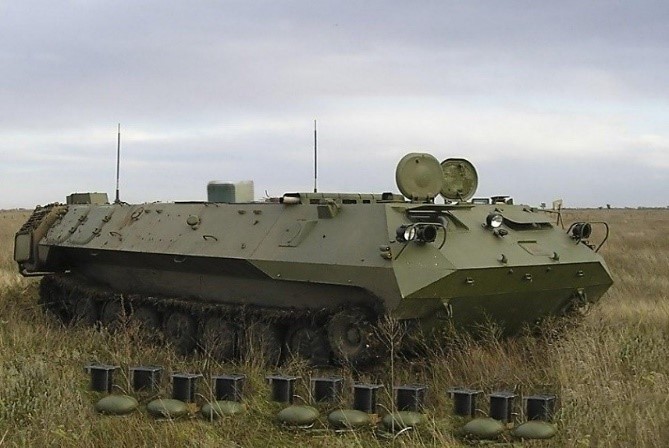 SL 2A. The SL 2A Acoustic Locating System has been developed by Thales Group of France. The system is stand-alone and provides 360º coverage over an area of 2000 m2. It can automatically detect and locate a wide array of bursts, from Artillery fire to bombs, mines, small arms fire and Improvised Explosive Devices. The system comprises of eight autonomous sensor arrays (each with three microphones and a power source) and a central command post with a computing system and radio antenna. 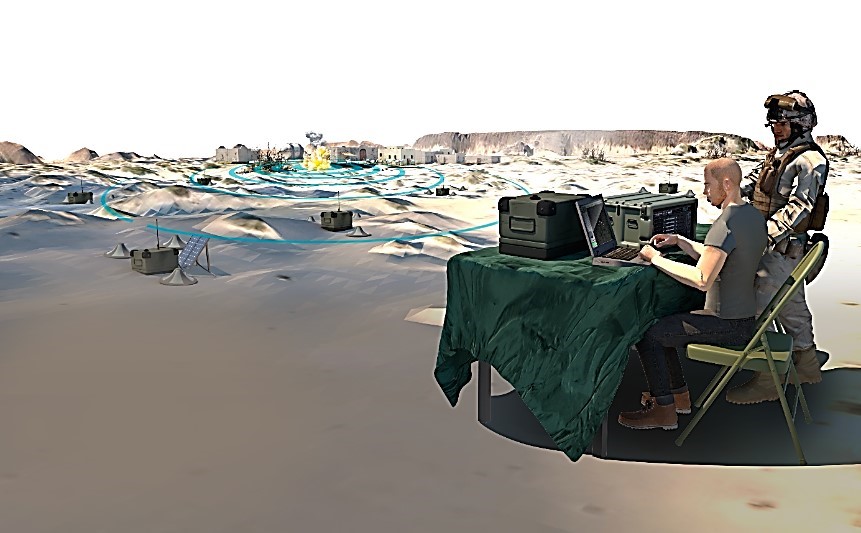 Arti-Loc.  It is also believed that Bangladesh has recently acquired this SR system from China. Details, however, are not readily available.

Pakistan is not known to presently have any SR system in its inventory.

The erstwhile concern of limited utility of SR systems in a fluid and fast-paced battlefield due to cumbersome deployment/redeployment effort/times is fast becoming unfounded with the advancement in SR systems, including greater autonomy of operation and wireless communication/ cueing links. SR systems aptly fill the gap in pan-frontage enemy Artillery locating capability due to their low cost, easy handling and consequent ubiquitousness. The IA would do well to re-orient towards acquisition/ development of such systems to develop optimum weapon-locating capability.

Jan 28, 2022
Further to the above article, Dutch Company Microflown Avisa has developed the CASTLE integrated acoustic vehicle, which features four acoustic multi-mission sensors (AMMS), two Global Navigation Satellite System receivers and a meteorological system. The vehicle is a high mobility vehicle which can be networked to existing Battlefield Management/ C2 systems. The system is capable of acoustic gunshot localization in standalone mode and detection/ localization of field artillery guns, mortars and rockets, as well as helicopters, vehicles and unmanned aerial systems. The vehicle also mounts an Acoustic Master, which is the intelligent hub in the CASTLE sensor post, networking the AMMS sensors and the running application software. The system uniquely works on analysing sound waves as well as supersonic shockwaves from the projectile for localization, in a timeframe of 8 to 15 seconds. The company has also developed quadcopter mounted acoustic arrays.