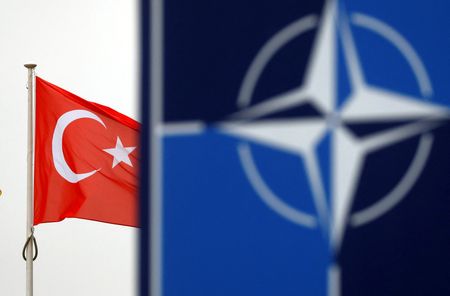 By Tuvan Gumrukcu and Jonathan Spicer

ANKARA (Reuters) – Turkey’s pledge to block some Russian warships from passing through its waters to the Black Sea during the Ukraine crisis could help repair its ties with NATO, even as it risks reprisals from Moscow.

But a buildup of Russian ships waiting to make the journey will test Ankara’s resolve over the next few days and show how far it is willing to go in tilting its uniquely delicate diplomatic balance between east and west. Turkey changed its rhetoric to call Moscow’s assault on Ukraine a “war” on Sunday – a move that would allow Ankara to use parts of an international pact to limit the transit of some Russian warships from the Mediterranean to the Black Sea.

That could curb Moscow’s ability to build up its naval force attacking Ukraine’s Black Sea Coast, though it all depends on the small print in the 1936 Montreux Convention. The pact allows Turkey to limit naval transit of its Dardanelles and Bosphorus straits during wartime but has a clause exempting ships returning to their registered base.

At least four Russian ships are currently waiting on Turkey’s decision to cross from the Mediterranean, Yoruk Isik, an Istanbul-based geopolitical analyst and head of the Bosphorus Observer consultancy, said. Two of them – a frigate and a destroyer – have formally asked to make the journey as soon as this week, according to Isik and a senior Turkish official. Any of them claiming the Black Sea as their base could still make the journey, leaving Turkey with some wriggle room.

“Calling it a ‘war’ is a very big step,” Isik told Reuters. “Ankara didn’t want to take this step and, with the language, is giving Moscow one last chance to stem aggression in Ukrainian cities.”

The stakes are high for NATO member Turkey which has maritime borders and good ties with both Russia and Ukraine. A decided shift to the West could burnish its standing within NATO after Turkey’s 2019 purchase of Russian S-400 missiles soured relations and triggered U.S. sanctions. Yet, any step too far may harm Turkey’s already beleaguered economy after a currency crisis in December and an inflationary spiral.

Russian natural gas accounts for 45% of Turkish imports, while Russians account for 20% of Turkey’s tourists. Atilla Yesilada of GlobalSource Partners said Turkey’s shift over the conflict was “almost certain to draw the Russian wrath,” and that this would be seen with bans on Turkish agricultural exports or provocations in Syria.

A separate official with knowledge of the matter said Turkey’s government planned to take steps to boost the economy now that fallout from the conflict is being felt “more and more by the day”. The lira briefly tumbled 5% last week as the attacks – which Russia call a “special operation” – began. Meanwhile, Turkey’s politicians have kept their own rhetoric measured.

President Tayyip Erdogan has criticised the Western approach to Moscow including the use of sanctions, while also taking a sharp tone towards Russia, calling the invasion “unacceptable” and a “heavy blow” to regional security. While forging close ties with Russia on energy and defence, Ankara has sold drones to Ukraine and inked a deal to co-produce more, angering Moscow.

Foreign Minister Mevlut Cavusoglu appealed to Russian and Ukrainian counterparts for a ceasefire and negotiations, which Erdogan has offered to host. Cavusoglu said on Sunday that ships returning to base in the Black Sea will be permitted passage and evaluated on a case-by-case basis. When it came to establishing the ships’ all-important home station, he added: “Everything should be transparent.”