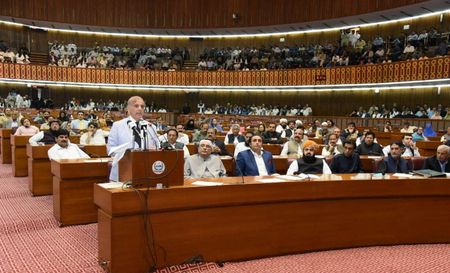 Pakistan’s new PM, Shahbaz Sharif, is a veteran politician, with the usual baggage of corruption related prison experience. He also has considerable marital experience, having entered into wedlock five times, divorced thrice and currently having two wives. Shahbaz Sharif is former PM’s Nawaz Sharif’s younger brother, Shahbaz Sharif, leader of PML-N and thrice CM of Punjab, had to be sworn in by the Senate Chairman because the President, an ally of Imran Khan, decided to go on sick leave, to avoid swearing in the new PM. Such political shenanigans are unique in Pakistan.

In an act of utter frustration, 100 National Assembly members of Imran Khan’s Pakistan Tehreek-e-Insaf [PTI] party resigned from the National Assembly after the no-confidence vote was concluded. Imran Khan is perhaps the only PM to have been ousted via a no-confidence in Pakistan’s history. Once again, the Army has ensured that no PM of Pakistan can complete a full 5-year term in office if he/she crosses the “red lines” laid down by the military brass. The two largest political parties in the government coalition are the PML-N and the PPP led by Bilawal Bhutto Zardari.

The new government is an unlikely coalition of political parties which have come together in a tactical move, with the Army’s approving nod. In Punjab, Pakistan’s most populous province, Shahbaz’s son Hamza has taken over as CM. Earlier, when Nawaz Sharif was PM, Shahbaz was CM of Punjab. The Sharif dynasty has made a comeback again. This turn of events will give exiled former PM Nawaz Sharif powers to guide decisions of the government. Both Nawaz and his daughter Maryam Nawaz have been barred from holding political office by convictions on charges of corruption, pursuant to the Army’s decision to keep them away from political office.

Pakistan’s Supreme Court has emerged as the knight in shining armour, in upholding constitutional propriety. Under its stern guidelines, the National Assembly finally voted in favour of the no-confidence motion against PM Imran Khan and ousted him from office on April 10. The odds were stacked against Imran Khan when the opposition, strengthened by defections from the governing coalition, had mustered support of enough MNAs to ensure majority support for the no-confidence motion. The political drama and manipulation that was played out in public, highlighted the desperation of Imran Khan and his allies to take the contest to the brink. The Supreme Court foiled all such attempts to subvert the Constitution. Undoubtedly, the Supreme Court’s tough stand must have had the tacit support of the Army, the top dog in the power hierarchy in Pakistan’s power structure.

Imran Khan’s desperate bid to dodge and duck the no-confidence motion was terminated when he was told bluntly by Army Chief General Bajwa and the ISI DG that he had to face the no-confidence motion. The Army was very active behind the scene, though in public it proclaimed that it was neutral. Pakistan Army’s neutrality is a myth and it was clear that it had decided to dump Imran Khan, their handpicked choice earlier in the 2016 election which it rigged to put Imran Khan on the PM’s chair. The Army’s support for Imran Khan led to his being nicknamed a “selected PM”. Imran Khan was the instrument the Army had used to unseat former PM Nawaz Sharif when the latter’s policies, particularly towards India, had made the Army uncomfortable. Nawaz Sharif had gradually initiated policies that asserted civilian political supremacy.

Rumours circulating in Islamabad also alleged that Imran Khan tried to sack Gen Bajwa but the bureaucracy refused to cooperate. Imran Khan may have attempted to appoint Lt Gen Faiz Hameed the former DG, ISI with whom he was on good terms since the time the Army decided to propel him into power. Imran Khan had crossed swords earlier with Gen Bajwa when a new DG, ISI was appointed to replace Faiz Hameed. He had to eventually back off. Imran Khan and his Ministers have admitted that their government’s ties with the Army were strained beyond tensile limits.

Imran Khan’s earlier attempts to snatch back control of foreign policy from the Army had led to plummeting ties with traditional donor countries like Saudi Arabia and UAE. The latter had invited India’s EAM as an invited guest to the OIC summit, irritating Pakistan no end. Pakistan had also threatened to convene a separate meeting of the OIC over Kashmir when the OIC did not show any interest in convening one. Under Imran Khan, Pakistan tried to undermine Saudi Arabia’s primacy in the Islamic world and OIC by ganging up with Malaysia and Turkey. All these moves led to difficulties in ties with two important Arab countries which had traditionally been generous with grant and loans to Pakistan, even providing credit facilities and discounted process for import of oil. When feathers were ruffled by these tactics, it was the Army which had to step in to mollify Saudi Arabia and UAE.

Imran Khan’s most brazen tactic was to point a finger at USA for organizing the move to oust him. He kept alluding to a cable sent by the Pakistani Ambassador in Washington which had reported comments of a senior US State Department official. The latter is alleged to have suggested that it would be better if that no-confidence motion succeeded and Imran Khan removed from office, otherwise bilateral ties would not improve. USA was unhappy with Imran Khan’s policies and was angered by his visit to Moscow to meet President Putin at a time when Russian escalated the war in Ukraine.

When a politician’s bloated ego is combined with hubris, the end result is predictable. Imran Khan too, fell prey to the temptation of attempting to assert civilian political supremacy over the Army. Imran Khan had outlived his shelf life by his own incompetence. He lacked administrative experience and gravitated towards the Islamist right-wing of the political spectrum, for which he earned the nickname “Taliban Khan”. He called the Taliban freedom fighters and Osama bin Laden a “martyr”. He tried to exploit popular perceptions of anti-Americanism and jihadi sentiments.

As for managing the economy, he was an abject failure. Economic mismanagement during his tenure as PM, saw a dip in GDP, hyperinflation, sharp drop in the value of the Pakistani Rupee, low exports and dwindling foreign exchange reserves. Pakistan’s economy shrank and in GDP and other economic indices, it slipped below that of Bangladesh. Imran Khan’s promise of a “Naya Pakistan” fizzled out quickly.

As the new government of PM Shahbaz Sharif settles down, the new PM is also going down the road of populism. Shahbaz has sent out friendly signals to China, USA and India, harping on the usual “Kashmir” issue, whose solution is “indispensable” for normal ties.  India has repeated her consistent position that she desires peaceful and normal ties with Pakistan, in an atmosphere free of terrorism. Terrorism is the preferred tool of the Army and there is no sign that this has been discarded. Marginal improvement in bilateral ties with India may occur, beginning with restoration of full diplomatic ties, opening of trade and travel. Shahbaz Sharif has to show that he is different from Imran Khan. Pakistan’s business leaders have called for restoring normal trade ties with India. Shahbaz Sharif government’s longevity, even for the 16 months of its tenure is doubtful.

Meanwhile, a wounded Imran Khan has taken to the streets, exhorting his supporters to come out in protest. His PTI party is largely intact and he can count upon his popular image to claw back the ground he has lost. Imran Khan is again attracting large crowds. The moot point is whether the Army will tolerate him or do a “deal” with him again.

Already, allegations of corruption have surfaced, indicating that the Army may want to initiate court cases against him and convict him and sent to prison. Then the inevitable “deal” will be worked out to offer him exile and banishment from politics. Will this happen? Only time will tell. 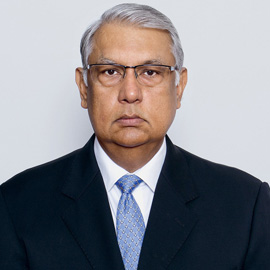 The author is a former Secretary in MEA and former Ambassador; he is a founder Director of DeepStrat and a Visiting Fellow at ORF, Delhi.

Apr 24, 2022
Dear people of Pakistan. I am delighted to learn of this 'purana Pakistan.' Here I was worried that a new government in Pakistan might actually do something good for its own people, and become a developing nation. Doesn't look there is any intent to do that. The first thing the purana Pakistan did, when it came into existence, is to appoint a commission to determine who was less of a Muslim, and who more. Restart that, Pakistan. I wish you well. This time, declare yourself a Caliphate (you are already an Islamic republic, and that was not enough). Surrender to the Taliban. It is the quickest way to transform backward as you are currently aiming to do. This time around, outlaw education entirely (your education system has produced nothing much of value anyway). Ban electricity as well, declare the internet 'haram.' Ban music (you are being corrupted by Indian entertainment anyway). Purana Pakistan assumed that they were caretakers of Islam, demanded that all Islamic nations should give them money, award them leader status, send them arms, send them their military personnel, so they could get Kashmir and destroy India. I hear things haven't gone that well on that front, but nothing wrong in trying again. Purana Pakistan assumed the supplicating to Saudi Arabia, taking their money, and then never returning it, was a great idea. Well, good luck with that now. Purana Pakistan invested heavily in friendship with China. So what if China is a bit upset with you, supplicating to them and pawning any of your remaining national assets to them, might take you back to purana Pakistan. Going backward, to the purana instead of the naya, might be the one thing you are capable of doing. God speed.