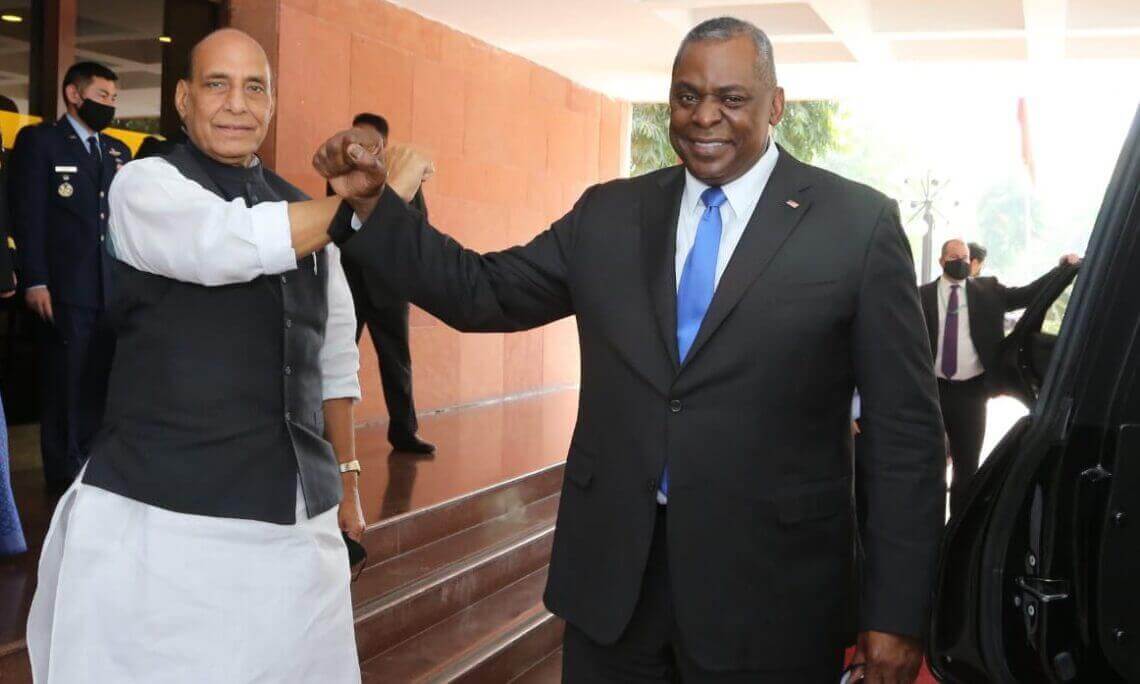 The US-India defense ties have acquired critical momentum. Given India’s geo-strategic surroundings and the downward slide in its relations with China in the recent years, this relationship is bound to move in the upward trajectory only. China and the Indo-Pacific will be the defining features of this relationship in the short and long term.

In just a decade’s time, the bilateral defense trade has crossed the $20 billion mark. India has purchased arms worth $7 billion even during the pandemic years of 2019-21. They include naval guns in 2019, Integrated Air Defense Weapons System (IADWS), and lightweight torpedoes and Harpoon Block II missiles in 2020. After the inauguration of the Biden administration in early 2021, orders were cleared for six P8I Poseidon Maritime Surveillance aircraft this year. India is also acquiring Seahawk and Apache helicopters. Companies like Boeing and Lockheed are in negotiations for India’s future fighter aircraft requirements.

India was made the Major Defense Partner (MDP) by President Obama in 2016, which placed India on par with US’ longtime allies and partners. In subsequent years under the Trump administration, several foundational agreements including Communications Compatibility and Security Agreement (COMCASA), Basic Exchange and Cooperation Agreement for Geo-Spatial Cooperation (BECA) and Industrial Security Annex (ISA) were signed by the two countries. India was accorded Strategic Trade Authorization (STA)-1 status, which was otherwise available only to the MTCR and NSG member countries.

The 2+2 ministerial dialogue and several bilateral and multilateral military exercises have added further heft to the cooperation.

India has substantially liberalized its FDI regime in defense sector allowing 100% investment in select areas. In this backdrop, the signing of ISA will give greater impetus to the cooperation between the private industry in the two countries.

All this points to the fact that the defense relationship is bound to scale newer heights in coming years. The overall trade relationship between the two countries too witnessed a significant rise in the last two decades. It stands at $150 billion today.  Ambitious targets have been set for the bilateral trade to reach $500 billion by the end of the decade.

But then, amidst all this euphoric narrative, there are certain important red flags that the two countries need to take cognizance of.

One, despite enthusiasm there is not much progress in areas where foundational agreements were signed. While India needs to improve its investment climate including regulating its regulatory bodies, US needs to push its military-industrial complex hard to explore opportunities in India.

Two, India is thankful that the US has accorded it the status on par with a treaty ally in signing those agreements. But it is also an important fact that we are only a non-treaty ally. As a non-treaty ally, India continues to insist on the flexibility to turn to other countries in defense trade.

Three, India’s dependence on Russia for military hardware and weapon systems like S 400s should be seen from that prism. As a non-treaty ally, India should get a waiver from the 2017-vintage CAATSA (Countering America’s Adversaries Through Sanctions Act) regulations in such matters. It must be borne in mind that almost 70% of India’s defense hardware has Russian footprint and that makes it imperative for India to depend on that country for spares and servicing. At the same time, India’s imports from Russia have fallen by more than 50% in the last few years, while the Indo-US defense trade has grown from near zero to $20 billion in last twelve years. A little more patience on the part of the chair and members of the Senate Foreign Relations Committee in this matter will be helpful. The CAATSA sword shouldn’t be allowed for long to hang over India’s head.

Four, the relationship should go beyond one-country obsession, namely China. While China does pose a great challenge for both the countries in the short-term, the defense partnership goes beyond the immediate into the long-term future objective of an open, inclusive, and prosperous Indo-Pacific.

Six, the secular and human rights Jehadis in media, academia, think tanks and even in the administration in both the countries, who want to interfere in India’s democratic functioning, have the potential of disturbing the rhythm of the relationship.

Last, India’s strategic autonomy and security imperatives will drive its decision-making. Just as Taiwan is the central preoccupation for the US currently, Afghanistan is for India. US and India should be able to appreciate and supplement each other’s priorities more meaningfully.

The trajectory of US-India defense relationship remained upwards under three different regimes in the US – that of Obama, Trump and Biden – in the last seven years. There is no reason to believe otherwise about the future. For achieving greater operational integration, the two countries need to work on the red flags with diligence and dexterity.

Shri Ram Madhav is a Member of the National Executive of the Rashtriya Swayamsewak Sangh (RSS) and Member, Board of Governors, India Foundation. He has formerly been the National General Secretary of the Bharatiya Janata Party (BJP). He is a columnist and an author with his most latest book being “Because India Comes First: Reflections on Nationalism, Identity and Culture”.

Jul 23, 2021
Though Americans have been saying that India is an important ally & further that they have entered into many agreements, it is rightly pointed out that there is an urgent need to ensure implementation through actions especially those issues which have been red-flagged. It’s time that they should walk the talk.

Jul 23, 2021
Well articulated and thoughtful insights with a passion for the same.