Quad-ASEAN Defence Exchanges On The Rise 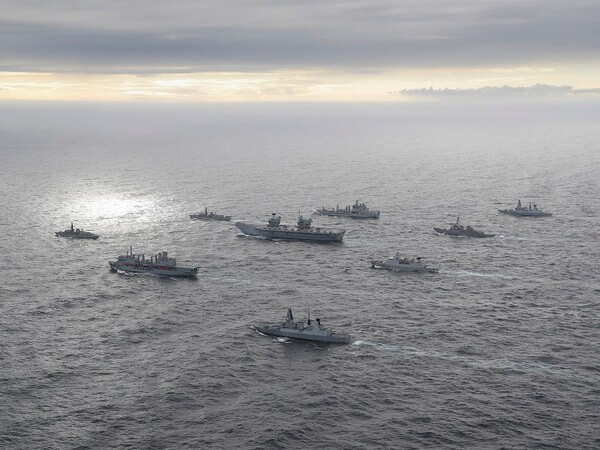 Quad-ASEAN Defence Exchanges On The Rise

The Malabar Quad exercise will take place in September of this year. For the second consecutive year all four Quad countries will participate.

An Indian task force of 4 ships from the Eastern Naval Fleet are already on a two-month voyage through the South China Sea (SCS) and Western Pacific where the Malabar will take place. The group comprises guided-missile destroyer Ranvijay, guided-missile frigate Shivalik, anti-submarine corvette Kadmatt and guided-missile corvette Kora.[1]

Besides Malabar, they will carry out bilateral exercises with the navies of Vietnam, the Philippines, Singapore (SIMBEX), Indonesia (Samudra Shakti) and Australia (AUS-INDEX). They visited Brunei before proceeding to Guam for the Malabar21.[2]

All the Quad countries have recently (2-6 August) participated in the EAS[3], ASEAN+1 Ministerial meetings as well as the meeting of the ASEAN Regional Forum (ARF)[4], the main forum for regional security architecture.

The Quad recognise that in the Indo-Pacific, particularly in the SCS, it cannot afford to be facing a hostile China and neutral ASEAN member states. Their buffer has to be more responsive than hitherto. The revitalization of US policy towards the ASEAN could be seen in this context.

The SCS and the Indo-Pacific is seeing an increasing level of activity from the Quad. They are engaging the ASEAN member states more. This has to take into account that China is certain of its control over the SCS and is focusing on Taiwan. China regularly breaches Taiwan’s ADIZ and has deployed both its aircraft carriers with full battle groups around Taiwan. The Chinese are using their occupied island territories in SCS with increased capacity of missiles and now aircrafts. At present, China has the capacity to deploy as many aircrafts as on an aircraft carrier on these Island bases at one time.[5]

Therefore, the US and its partners realise that a single carrier battle group (CBG) would be inadequate to deal with the Chinese strength based off these Islands. At least two CBGs would be required in the Indo-Pacific. The USS Reagan led CBG, from Yokosuka, was deployed to help in the evacuation from Afghanistan and could return soon.[6] It supported the 5th Fleet’s USS Dwight D Eisenhower and its CBG , which have been in the area since April 2021.[7] The CBG led by USS Theodore Roosevelt has also returned to the SCS.[8] If the Indo-Pacific Command is to be more effective it needs to constantly deploy 2 CBGs. The visit of the UK CBG may be partly seen in this context.[9]

Another notable point is that the US scrambled out of Afghanistan and may reduce its involvement in West Asia. The exit from Afghanistan could allow more leeway for releasing periodic CBG deployment under CENTCOM to the SCS and Indo-Pacific.

The US is aware that ASEAN as a whole has been slow in re-engaging them for a joint exercise. The first ASEAN-US maritime exercise was held at the Sattahip naval base in Thailand in September 2019. It passed through Singapore and concluded in Brunei. About 1000 people representing all 10 ASEAN member states and the US promoted a shared commitment to maritime security and stability in Southeast Asia. This included all ASEAN countries including Chinese allies like Cambodia and Laos. Though this was the result of a proposal at the ADMM-US meeting in 2017 and 2018, it has not recurred because of sensitivities towards China and lack of unanimity among ASEAN members. A China-ASEAN exercise of 2018 has also not recurred.

The three ASEAN countries which US Defense Secretary Austin visited recently, undoubtedly have strategic importance. Singapore, for example, is a key port for the US 7th Fleet, playing a significant role in providing logistic support for military aircraft and ships. Vietnam and the Philippines directly confront China over their respective territorial issues in the South China Sea.

Through such efforts, the US has enhanced its engagement with individual ASEAN countries. In April 2021, the Philippines and the US conducted the 36th Balikatan exercise held since 1991. It now has an Indo-Pacific dimension. It was held despite the pandemic with reduced participation, tabletop exchanges, training, real time security training, and similar activities.[10]

A significant result of Secretary Austin’s visit to Philippines was the decision to hold off on the abrogation of the Visiting Forces Agreement, the basis of the US Philippines arrangement for military bases [11].

The US-Indonesia Garuda Shield exercises is another annual exercise for more than a decade. Held in August, it covered the large outlying islands of Indonesia, including Kalimantan, Sulawesi and Sumatra.[12] Over a fortnight it involved amphibious, special forces and airborne units. In June 2021, Indonesian and US Marines conducted joint exercises focusing on conflicts in urban locations and are scheduled to do another exercise in the US later this year. US and Indonesia are constructing a joint maritime Training Centre in Batam, a small city on an island near the Malacca straits and close to Singapore.[13] The US tries to solidify the US-Indonesia Major Défense Partnership and cooperation in support of a free and open Indo-Pacific (FOIP) region.

Thailand manifests the American dilemma in dealing with ASEAN. For several decades, Thailand and the US had a mutuality of interests as Thailand saw the US as a support against Chinese and Vietnamese influence in the region. Thailand, now having abandoned its democratic credentials, its military regime is more inclined towards engaging China and sees it as an uncritical partner. Due to their domestic issues and accommodation with China, Thailand does not have a strategic interest with the US; its main challenge is democracy, not China. The US has reduced financing for Thailand’s arms purchases following the coup in 2014.

This dilemma over democratic rights, economic assistance and proximity makes the US rethink its ASEAN engagement. Thus, traditional allies like Thailand and Philippines become ambivalent whereas old enemy Vietnam is a strategic partner.

During July 2021, Australia and Japan with eight other countries held joint exercises around Australia. This was preceded by the Australia-US, Talisman Sabre exercise. It was later joined by Japan, UK, Canada, South Korea and New Zealand.[14] India, Indonesia, Germany and France sent observers. This combined exercise would further strengthen the FOIP.

The traditional ASEAN policy of outsourcing its security requirements mainly to the US was challenged when China became more aggressive and the US pivot to Asia did not happen under the Obama administration. During the Trump period, ASEAN was not a priority for the US. Under the Biden administration, the Indo Pacific and the Quad have a much higher priority.

Thus, the three-pronged policy recognises that China is the main factor and ASEAN has accommodated it, particularly in the economic sphere. The US wants to reengage with ASEAN and select member states. For this it prefers the regional architecture, to provide space, and a buffer between China and its rivals.

Increasingly the ASEAN buffer was inclining towards China. Now, efforts are made to restore the balance within that space particularly on the security and functional side. Undoubtedly for this to happen ASEAN member states also have to play a role.

ASEAN unanimity is now passe. When Cambodia takes over the chair for 2022 it is likely to play its pro-China role that it did in 2012. Hence, engaging ASEAN, praising its centrality and not giving up on it, is part of the policy.

A third prong of the policy of the US and other Quad members is clearly to engage with willing ASEAN member states who have greater strategic value. In this, Singapore, Indonesia, Vietnam, and Philippines are the main partners. Thailand, Malaysia, as well as Myanmar, due to their internal situations are not forthcoming. Such ‘ASEAN Plus’ policies from individual member states are small steps.

In my view this effort to deal with specific member states have increased their security and functional support for instance in fighting the pandemic. This could be viewed more vigorously by the US and its Quad partners. With this objective in mind, the significance of defence engagement of the US, the EU countries and the UK, with ASEAN countries certainly have greater significance as well.

Sep 07, 2021
QUAD if formed property can be a gamechanger in the southeast Asia as well as in the subcontinent. Provided that all the players involved play their cards right, it can lead to major developments.

Aug 22, 2021
Quad members must invite ASEAN members to Malabar exercise as observer countries. This will build confidence in these countries who are bullied by China and also will help to build their capabilities