Protests in China – Xi Under Pressure 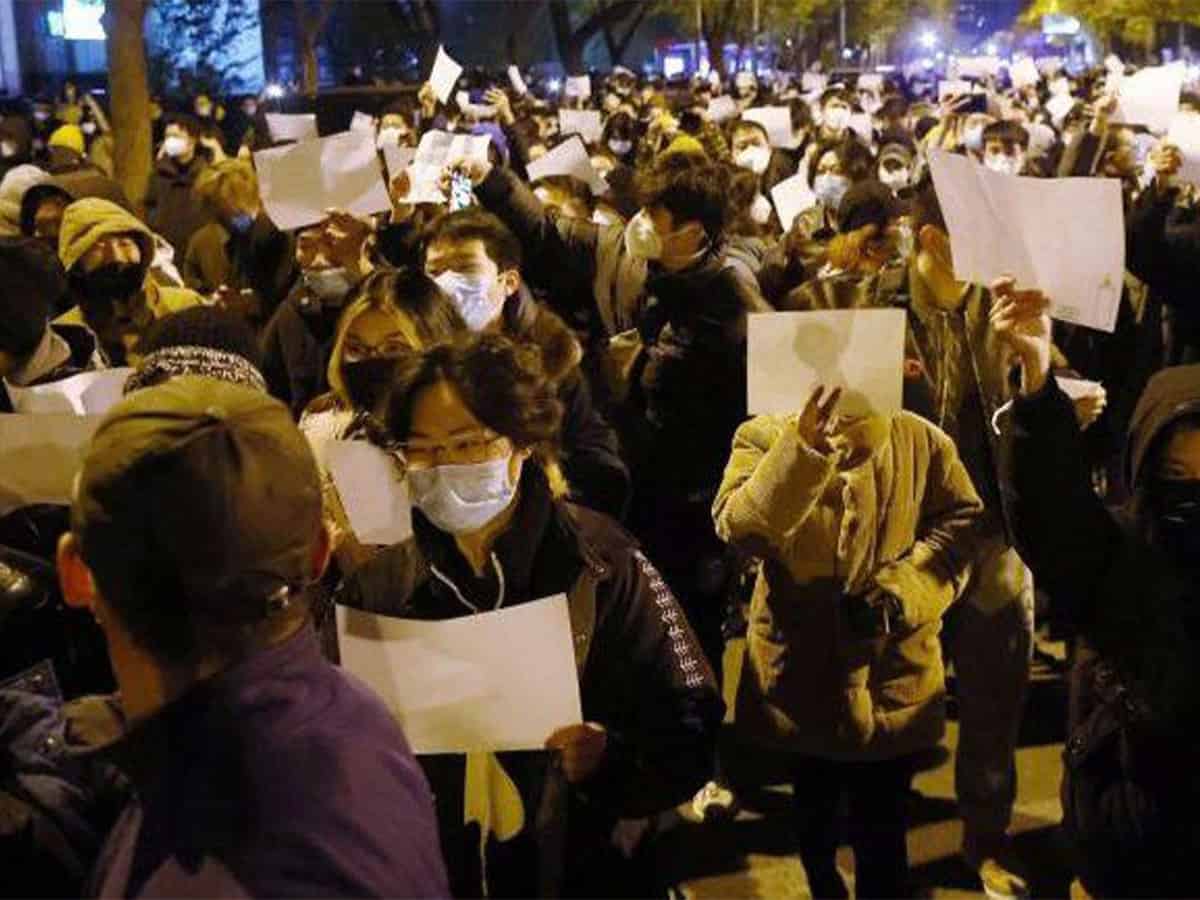 It’s all quite unheard of. Well, nearly. Protests spread across China into 14 provinces, lit by the governments ‘Zero Covid’ policy. At least so it seems. There’s a lot to anger the Chinese people these days, and it could be that the pandemic restrictions were the last straw. The scale of protests is unprecedented, at least over the last decade. Before that was the Falun Gong movement, which was far larger with millions of members, and which saw its height of protests in 1999. But that was a different China, waiting in the wings for its time of glory. Today’s Beijing, posing as a superpower, finds its face blackened, and questions being asked. No, it’s not going to be easy.

Trouble began slowly, first as workers in the largest Apple factory in the world located in Zhengzhou, breached security to escape a lockdown and return home. The company had to follow the strict government guidelines in place and had little choice but to offer to quadruple bonuses. But the damage was done as videos of fleeing people went viral on social media. That was in end October.

Then came a deadly apartment fire, where it was alleged that people were unable to get out due to a partial lockdown of the complex. That in turn led to a public questioning on WeChat for corrections in policy, quickly followed by a series of protests in Xinjiang, the first seen since 2017. By the end of the week, protests had spread to Shanghai, where a candlelight vigil was set upon by the police, thereby adding fuel to the fire.

At the time of writing, there are protests in 14 provinces, with the largest number if Beijing, and including dozens of  university campuses. Heavy police presence has led to a cancellation of some of the protests. But the anger is palpable.

The irony of all this is that Covid cases in China are going up, not down despite the suffocating ‘Zero covid’ policy. The last report noted a record rise of some 42,000 new covid cases, with a total of some 3,11,624 cases with symptoms. Whether these are the actual figure, or whether they have been damped down by local authorities in particular, who have much to lose under Beijing’s questioning gaze is not clear. And there is the inevitable question as the efficacy of its Sinovac vaccines. The fact that highly vaccinated countries like Malaysia who used Sinovac suffered high infection rates, and that George Gao, the head of the Chinese Centre for Disease Control and Prevention, acknowledged the poor efficacy of China’s vaccines at a conference in April, underlined the problems involved. That in turn led to high resistance to vaccines.

China undoubtedly scored over the rest of the world in the initial stage, keeping deaths low – to the extent of it even crowing over India, as a post from an official communist party Central Political and Legal Affairs Commission’s post compared the exhaust of a Chinese space shuttle to the flames of India’s thousands of funeral pyres. The severe deaths in the US convinced Beijing of the soundness of its policy, and which in turn was tied to the ‘wisdom’ of the ‘Great leader’, and his ability to lead the people. Controls got even more stringent, and then came the infamous ‘pop up’, a contact tracing feature that turned up a window in the mobile covid app that blocked access to almost everything till a PCR test was done, with the whole process random and illogical.

As covid cases continued to spread anyway, many towns or apartments found themselves quarantined for weeks together, as cases climbed with the advent of the far more infectious Omicron. By September Caixin reported 33 cities and some 65 million people under some kind of lockdown; some places seeing lockdowns of more than a hundred days.

An explosion should have been expected. Clearly it was not, as police cracked down on even peaceful protests. That inevitable escalated into smashing of covid booths, and shouts against President Xi, and calls for freedom. In Chengdu protestors declared “We don’t want lifelong rulers. We don’t want emperors,” a clear reference to Xi’s continuance. Videos on social media specifically asked that Xi step down.  That’s asking for big trouble.

That came soon enough. Authorities swung into action with reports noting heavy police presence, bars closing early, and its infamous network of surveillance cameras used to pick up some who had taken part in protests. Universities which joined protests have been closed and districts like Haizhu, with more than 1.8 million people, which had been the core of much of Guangzhou’s Covid cases has also seen arrests after prolonged lockdowns.

Meanwhile, the powerful Commission for Political and Legal Affairs of the Communist Party of China (CPC) Central Committee met and called for authorities “promptly dredge and resolve conflicts” and difficulties, and “resolutely crack down on infiltration and sabotage activities by hostile forces and illegal and criminal acts that disrupt social order”. That means all hell will break loose upon those who protested on the ground, and on social media.

The charge of sabotage seems surreal given that trouble has been building up for months, over high unemployment, particularly among the youth after lockdowns, the earlier tang ping (lying flat) culture of simply giving up on severe overwork, and a series of shutdowns of internet companies among others, as part of Xi’s projection of cutting down the rich, has done little for the country.

That things were bad were obvious enough outside the country, with extensive and reliable reporting on this outside the country. Inside Beijing, early warning was there in the banner hung on a Beijing bridge which rather prophetically declared in one sentence “We don’t want covid tests; we want to eat…. We don’t want lockdowns, we want freedom”, this at Haidian, a university district.

So the possibility that others have raised, and that coincides with the political theory that long time dictators or even second term democratic leaders, progressively receive less real information than others, as they surround themselves with ‘yes men’.  This was particularly apparent at the 20th Communist Party Congress when Xi reworked the entire top structures towards extending and perpetuating his power.

So, here’s the real trouble. The protests will be stifled, and their perpetrators ‘disappeared’. Beijing after all dealt with 307 protest demonstrations between 25 April to 22 July 1999 in the Falun Gong movement, and much worse in the Tiananmen Square before that with a million people plus.

What’s likely to be problematic is that someone’s not telling Xi the truth. That’s trouble indeed; for Xi. And maybe for all neighbours who assume that the President knows what he is doing. The protests across China clearly shows only one thing. He doesn’t.

Dr Tara Kartha has spent 17 years at the National Security Council Secretariat, which sits at the apex of India's national security architecture. At the NSCS, she worked on terrorism and other security issues relating to the neighbourhood, and held special charge of the National Security Advisory Board (NSAB), among other responsibilities. Earlier, she was at the Institute of Defence Studies and Analyses (IDSA) for eight years, where she authored her book, Tools of Terror: Light Weapons and India's Security. She was also a consultant for the UN Non Governmental Expert Group on Small Arms and Light Weapons, and a resource person for the National Defence College (Delhi) and College of Combat (Mhow), in addition to being a member of the Council for Security and Cooperation in the Asia Pacific (CSCAP), and Pugwash (India).