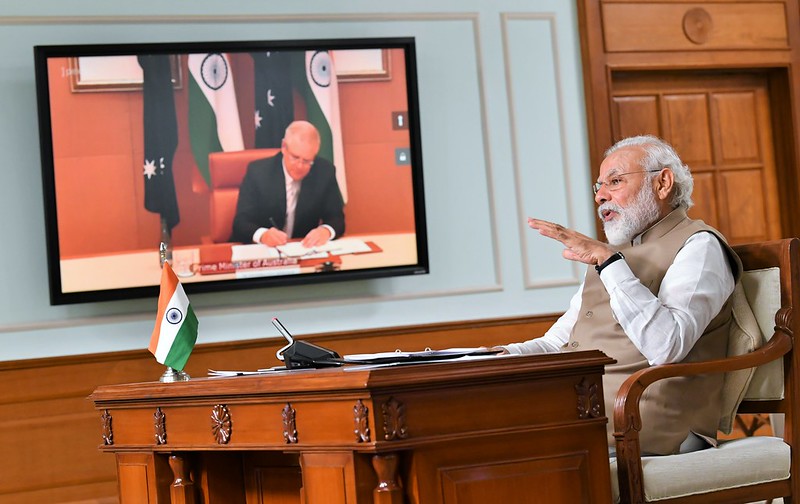 Prime Minister Modi conveyed his appreciation for the prompt and generous support extended by the government and people of Australia for India’s fight against the second wave of COVID-19. The two leaders agreed on the need to ensure affordable and equitable access to vaccines and medicines for containing COVID globally. Prime Minister sought Australia’s support for the initiative taken at the WTO by India and South Africa to seek a temporary waiver under TRIPS in this context.

India’s External Affairs Minister, Dr. S. Jaishankar, France’s Minister for Europe and Foreign Affairs, Mr. Jean-Yves Le Drian and Australia’s Minister for Foreign Affairs, Senator Marise Payne, met in London for the first India-France-Australia Trilateral Ministerial Dialogue on 4 May 2021, on the sidelines of the G7 Foreign Ministers’ Meeting. The France, India, Australia trilateral was launched in September 2020 at Foreign Secretaries’ levels with three joint priorities– maritime security, environment, and multilateralism. There have been Senior Official’s meetings on each track since then and now it is being raised to ministerial level. The trilateral mechanism is elevated at the ministerial level within one year of its inception.

The press release by MEA said, “India, France and Australia are committed to advancing their shared values and working together to achieve a free, open, inclusive and rules-based Indo-Pacific. The Ministers reaffirmed their support for the rule of law, freedom of navigation and overflight, peaceful resolution of disputes, democratic values, and respect for sovereignty and territorial integrity. During the Ministerial Dialogue, the three countries shared mutual concerns regarding the strategic, security, economic and environmental challenges in the Indo-Pacific region. They pledged to work together, and acknowledged the important role of regional forums such as the Indian Ocean Rim Association, the Indian Ocean Naval Symposium, ASEAN, the East Asia Summit and the Pacific Islands Forum. The Ministers agreed to deepen cooperation on maritime safety and security in the Indo-Pacific region. In this regard, the three Ministers welcomed the trilateral information sharing workshop on maritime domain awareness held at the Information Fusion Centre for the Indian Ocean Region (IFC-IOR) where both France and Australia have assigned a liaison officer, and encouraged information sharing between humanitarian and disaster relief agencies of the three countries.”

Today’s telephone call of PM Modi with PM Scott Morrison assumes significance as the frequency of higher level interactions between Quad leaders and countries like France, UK etc have increased over past few months. It is an assertion of the fact that India is going to play an important role in the emerging world order and balance the growing influence of China in Indo Pacific.

The leaders took note of the progress made in the India-Australia Comprehensive Strategic Partnership since the Virtual Summit held on 4 June 2020 and discussed ways to further strengthen cooperation and foster people-to-people ties. The Leaders also discussed regional issues and reiterated the importance of working together for a rules-based international order and a free, open and inclusive Indo-Pacific region.