Peoples Liberation Army and the Irony of the ‘Unmourned’ Soldiers! 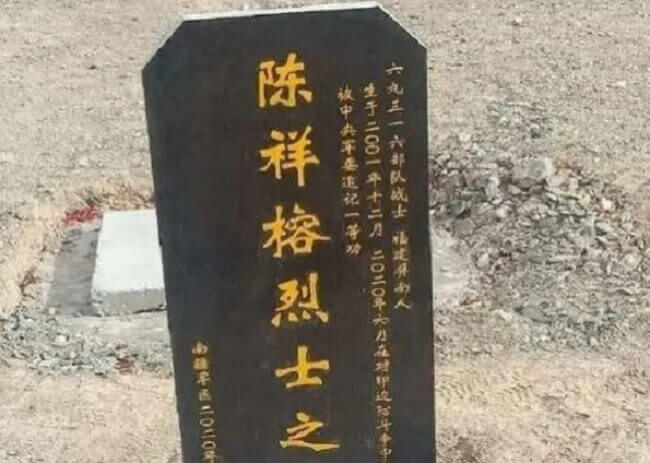 On 22 March 2019, Chinese President Xi Jinping laid a wreath at ‘The Tomb of the Unknown Soldier (Tomba del Milite Ignoto) at Rome, Italy. This monument is dedicated to the Italian soldiers killed and missing during war. Preserving and honouring the memories of those who died defending their country in any war, is a solemn occasion globally on different days, but the tradition of honouring is similar. The Memorial Day in the US is the last Monday of May, Remembrance Day in Canada on 11 November and on the Sunday closest to it in UK, on 25 April the ANZAC Day in Australia and New Zealand and Victory Day (la Fete de la Victoire) on May 8th in France, all celebrate and honour the martyrs. In India, on the Republic and Independence Days and the Vijay Diwas poignant memorial services are held at the National War Memorial and across the Nation.

China stands conspicuous by denying any ceremonial honouring of the soldiers who give the ultimate sacrifice. But then that is the way totalitarian regimes, like in China function, with the fear of adverse public sentiment, and to ensure the falsehoods of the invincibility of their Army!

The Great Leap Forward of 1958-1962 resulted in estimated between 15 to 55 million unsung deaths, making it the largest famine in human history. In the 1962 War which the China called “Counterattack in Self Defense on the China-India Border,” the PLA claimed that the Indian Army had more than 8,000 Indian soldiers who were killed, wounded, or captured. The Indian armed forces battle casualties toll in the 1962 War stood at 1,383, and 1,047 were wounded, besides, 1,696 Indians went missing and over 400 taken as prisoners of war. The names of the valiant soldiers are honoured by inscription at the National War Memorial in the Central Vista in New Delhi.

The Chinese clamped on the numbers of their soldiers who died in the 1962 War, and 26 years later in 1994, in an internal history document a figure of 722 PLA soldiers killed and around 1,400 wounded was seen! Even 40 years after the short yet devastating war launched by China in 1979 against Vietnam, which as per western estimates run as high as 28,000 Chinese dead and 43,000 wounded, there has been but no any official commemoration of the War in China.

Flash forward to the present! The PLA undertook the premeditated multiple transgressions by the PLA in Eastern Ladakh in May 2020. At the Galwan River clash on night 15/16 June with the Chinese soldiers armed with medieval-style weapons like spiked maces, the Indian Army had 20 martyrs, including the Commanding Officer of 16 BIHAR Battalion. Later the nation paid homage to these valiant soldiers and their last rites were performed ceremonially, at their respective native place across the country. These were poignant moments in the Nation that stood galvanised by the events of the Galwan Valley. A Memorial to the valour and raw courage of the Indian Army martyrs of Galwan River has already been erected pronto, and adorns the banks of Shyok River close to the Shyok-Galwan estuary.
The clash was reported differently in China, thanks to a totally controlled media and even the guarded social media space. Varying figures of PLA casualties in Galwan Valley have been spoken off from 33 to 45. According to American reports, the number of casualties on the Chinese side was over 100. Chinese social media was abuzz with speculation about the number of PLA soldiers that died during the skirmish along the border in Eastern Ladakh. The news of the clash started speculation on Chinese social media like on Weibo; people have been asking questions about the number of casualties among PLA soldiers. Though the Chinese state media had sought to control the narrative around the clash on Weibo and other social media by releasing limited information from official sources, the clash between Chinese PLA and Indian soldiers continued to trend on Weibo. On 17 June, the Hash tag “China-India conflict” was the fifth top trend on Weibo, used over 1.34 billion times.

On June 16, Wang Wenwen, a reporter at the Global Times, initially posted on Twitter that five PLA soldiers had died in the clash.

Soon thereafter that tweet was retracted, as the claim was based on an Indian media source. Global Times Twitter account later posted that “The official Global Times accounts have NEVER reported the exact casualties on the Chinese side. The Global Times CANNOT confirm the number at the moment.” Hu Xijin, the Global Times’ editor, also tweeted: “Based on what I know, Chinese side also suffered casualties in the Galwan Valley physical clash,” without providing additional details. On June 17, Hu posted a message along with a video on Weibo, urging netizens not to put stock in foreign media reports: “Finally, I want to say to netizens again, please trust our government and the PLA’s ability to deal with border issues. Don’t listen to any rumors about the number of casualties from abroad.”
A large number of Weibo accounts retweeted this message by Hu and questioned the official number of casualties released by the Indian media. In another message on 17 June, Hu said, “We must trust our government, the People’s Liberation Army, and they will resolutely defend every inch of China’s territory, and at the same time they will defend it well. They know exactly what to do every time.” As a typical obfuscation, on 17 June, Global Times’ official Weibo account shared a clip of a propaganda documentary about the 1962 war, which has been widely shared among Weibo users.
A prominent Weibo user with large number of followers posted that: There were zero deaths of Chinese soldiers, but there were injuries. The ones with serious injuries were already flown to safety. Indian soldiers crossed to hit our construction team.

On 10 February 2020, the Russian official news agency TASS reported that 45 Chinese servicemen were killed in the Galwan Valley clash. This news item seems to be a catalyst that propelled the events, thereafter. Hence inexplicably on 19 February 2021, the PLA Daily, official newspaper of the Chinese Military intimated that five Chinese frontier officers and soldiers stationed in the Karakoram Mountains have been recognised by the Central Military Commission (CMC) for their sacrifice in the border confrontation with India, which occurred in the Galwan Valley in June 2020. Those killed included Qi Fabao, the regimental commander from the PLA Xinjiang Military Command.
According to the report, three PLA soldiers were killed in the combat while another soldier died while crossing the river when he went to support the others. Qi Fabao, the regimental commander of the Chinese military, sustained a serious head injury. Later, the Global Times reported that the four were killed fighting the “foreign military”. The awards announced for the five are – Qi Fabao, the regimental commander from the PLA Xinjiang Military Command got the title of “Hero regimental commander for defending the border,” Chen Hongjun “Hero to defend the border,” and first-class merit to Chen Xiangrong, Xiao Siyuan and Wang Zhuoran. Convienently, Qian Feng, director of the research department at the National Strategy Institute at Tsinghua University, told the Global Times that China “unveiled details of the incident to refute previous disinformation that stated China suffered greater casualties than India or China incited the incident”.

That brings into fore the Global Times’ Hu’s explanation that China did not release the casualty figures because “the Chinese side doesn’t want people of the two countries to compare the casualties’ number so to avoid stoking public mood.” It is apparent that the announcement relates to awards posthumously, and does not reflect on the total number of casualties, which obviously will remain shrouded, for many a year, or many a decade! It is also paradoxical that PLA refuses to acknowledge that the clash is with India, shrouding it under the foreign military garb! Apparently the internal dynamics of China preclude any rise in public sentiment that can augment against the CCP establishment. This is apparent from the anger that flooded Weibo on the China’s foreign ministry’s mention of the death of five PLA soldiers in Galwan Valley. To offset the internal anguish, Chinese is conveniently leaking selective videos in media of Chinese soldiers in action! To avoid any challenge to its CCP’s supremacy, the PLA will not hesitate to bury the soldiers unsung, without familial involvement, rather dishonoured, and most unlike other professionally Armed Forces worldwide. Obviously truth will remain a casualty in China, in perpetuity!
A martyrs’ cemetery called the ‘Tomb of the Unmourned Soldier’ in China’s Yunnan Province that should rightly honour the Chinese soldiers killed in the Vietnam War, remains without due ceremonials. A great irony it is, that the Chinese President commemorated the martyrdom of the gallant Italian soldiers who had laid down their lives for their country as mentioned above, though the Communist Chinese Party (CCP), finds little time and place to honour the soldiers who died in various wars PLA, within the country! In drawing parallels, the Chinese soldiers who laid down their lives in the Galwan Valley on the night of 15/ 16 June 2020, will ever remained ‘Unmourned’ in perpetuity!

Feb 22, 2021
The narrative underpins the humanitarian aspects of a democracy vis a vis the monolithic totalitarian regime of CCP.Even the dictatorial regimes do honour the valiance of the military rank and file who make supreme sacrifice for the sovereignty of the Nation..The commemmoration of the fallen rank and file serves as a motivating factor for the nation.The instant happenings flag the basic apprehension of the CCP that the exact details may induce *social trauma* in one-child-norm Chinese society.Howsoever opaque the governance system be,the actual details will be known to the public as the family of each PLA soldier would have known the fate of its ward due to lack of personal communication over time.It also highlights the organisational peculiarity of the PLA wherein the all important aspect of maintenance of *morale and motivation* is the responsibility of the political wing of the PLA unlike Indian Army where it is the Command Function.PLA too follow the conscription like US army but the latter value its war heroes. THERE IS A LESSON FOR THE NAYSAYERS THAT OUR SYSTEM IS TRANSPARENT.