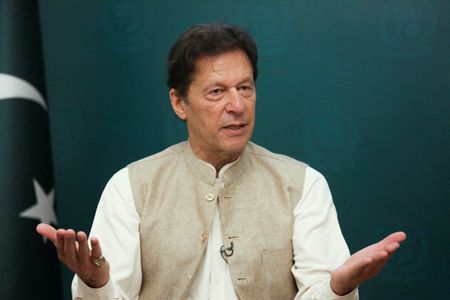 One way or another, history is in the making in Pakistan. One of two things which have never happened before, could happen in the next few weeks and months. If the opposition parties are able to carry through a no-confidence motion (NCM) against the ‘selected’ Prime Minister Imran Khan, it will be the first time in Pakistan’s history that such a move would have succeeded; alternatively, if the opposition can’t bring, much less carry through, a no-confidence motion, then it will be the first time in over 75 years of Pakistan’s coming into existence that a Prime Minister will complete his/her full term in office.

Of course, since it is Pakistan we are talking about, nothing is ever in black and white. Even if Imran Khan manages to ride out a NCM, he still might not be able to complete his full term. There are other ways of getting rid of him, including the foreign funding case. The bottom line is that whether Imran stays or he goes depends entirely on whether the guys who foisted him on Pakistan want to get rid of him, or they would rather have him dig the hole in which Pakistan finds itself even deeper.

That Imran Khan has been rattled by the opposition moves to bring a NCM against him is very apparent. The way he has gone after one of his former cronies and now his staunch detractor, Mohsin Baig, is a sign of how unhinged he has become. Pakistan’s political history informs us that when rulers start doing what Imran Khan has done with a prominent newsman like Baig, the curtains are about to fall. But the arrest of Baig whose only crime was to refer to a salacious paragraph in the book of Imran’s second wife, Reham Khan, isn’t the only sign of growing panic in the ranks of the ruling dispensation. Over the last few days, Imran Khan has been forced to get off his high horse. He is being compelled by the opposition’s overtures to his coalition partners to reach out and placate them after having ignored over the last three and a half years.

There are also reports and rumours that Imran is becoming so desperate that he is now considering doing what he was infamous for on the cricket field – tamper with the constitutional and legal provisions to cling on to power at any cost, even at the cost of irretrievably damaging the already much abused and distorted democratic polity. Among the steps he is supposed to be considering are using the police and other investigating agencies to round up opposition leaders and throw them in jail so they cannot organise the NCM or even vote on the motion. There are also reports that the speaker’s office will be used to play a fiddle with the votes cast – many of them will be labelled invalid, or the anti-Imran votes will be undercounted, or members of the ruling party opposed to Imran will not be allowed to vote.

All this might shock people in India who would be inclined to think this kind of thing is inconceivable. While it is inconceivable in India where a Prime Minister was voted out by one vote, it is Pakistan we are talking about where these sorts of shenanigans are par for the course. More seriously, there is talk of Imran playing politics within the Army – either giving another extension to the current Army Chief General Qamar Bajwa to buy his loyalty, or even announcing his successor nearly 6 months before he doffs his uniform.

While Imran is weighing his options, the opposition parties are also trying to get their act together. All sorts of confabulations are taking place between the main opposition parties – PMLN, PPP, JUIF – to work out the permutations and combinations to make the NCM successful. According to the grapevine, the opposition has the requisite numbers. A number of disgruntled members of Imran Khan’s party are all set to jump ship. Another one of Imran Khan’s former advisor, financier and political organiser Jehangir Tareen is reportedly marshalling the disgruntled element which is seeking to secure their political future by jumping the sinking ship of Imran Khan. Contacts have also been established with coalition partners to pull out support from the government. But they are awaiting for the signal from the Pakistan Army which had corralled them into Imran Khan’s camp after the 2018 elections. A nod and a wink from the military establishment will be enough for parties like PMLQ and MQM to switch sides. There are also reports of channels being opened between the military and Nawaz Sharif. The latter is believed to have given his nod for the NCM.

The issue, however, is not so much about bringing a NCM and making it successful – this is the easier part; the issue that is continuing to hang fire is what will follow after a NCM is carried. The roadmap on that is not clear. Will an in-house change take place, and for how long? Will it be just a temporary arrangement to put in place a caretaker government and go for fresh elections, or will the new dispensation serve out the rest of the term of the National Assembly? If it is the latter, how will the spoils be shared? Will the next PM be from the rump PTI supported from the outside by the other parties? Will the PM be from the PMLN or even PPP? Who will get to rule Punjab? Will PMLQ insist on getting the CM of Punjab? Will PMLN be okay with this? What’s in it for PPP? It already has Sindh and has virtually no presence outside the southern province. Will it be okay with an early election held simultaneously for both centre and the provinces?

While there is no constitutional bar on holding elections separately for the centre and provinces, by convention Pakistan has always held simultaneous elections and there is no sign as yet that the politicians are ready to break with this convention. What will happen to the MNAs who desert the PTI? Under the law, they stand to lose their seats. Will they be given assurances of getting re-elected in by-elections and given tickets of one of the opposition parties in the next elections? There are innumerable such loose ends that will first need to be tied up before the NCM. Plus, the opposition parties will have to be clear on their game plan in case the fascist regime of Imran Khan tries to obstruct the NCM. Will they then undertake a common Long March to oust the regime? How much pressure can they build on the streets to force Imran Khan out?

Even if the political questions listed above are sorted out, there remains the mother of all questions: what will the opposition parties do to fix what Imran Khan has broken over the last three and a half years? What is their strategy for putting the almost failed economy back on the rails? What manna from heaven will drop in their laps to provide relief to the millions who are reeling under Imran Khan’s economic mismanagement? How do they propose to ensure civilian supremacy and rule of law? There is absolutely no clarity on any of these issues. Worse, there is no trust between the various opposition parties; if anything they have competing and clashing interests which they want to secure as part of the bargain to get rid of Imran Khan. This is something that can becoming a big stumbling block going forward. What is more, this factor can also be exploited by the military establishment to keep playing the political puppeteer in the months ahead.

By all accounts, whatever has to happen will happen in the next couple of weeks. If things drag on beyond March, or even mid-April, Imran Khan will serve out his term. He will also make a play to rig the system in a way that he stands a good chance to win a second term backed by former ISI Chief Lt. Gen. Faiz Hameed who he will appoint as Bajwa’s successor and who will pull every dirty trick in the book to ensure Imran Khan’s victory in the next elections. This reality is not lost on the opposition. It knows that if Imran is allowed to complete his term, it will be curtains for them. The question is whether they can put their immediate interests on the backburner to secure their political future; or will they bat for the immediate goodies and risk losing it all. The next few weeks will give the answer to the future political trajectory of Pakistan.

Feb 18, 2022
The fake drama that is Pakistan will continue; a deluded and corrupted leadership in an uneducated, unaware, inarticulate, anti-intellectual people is capable of little more than cheap theater. Who cares - as if Imran (who is gloriously dull) is the problem. Remove him, keep him, what difference would it make? The next one will do exactly what all others in the past have done: (a) go with a begging bowl to every country - point to Kashmir - and ask them to deliver it to Pakistan and money to keep their people alive, and (b) take all the money that comes in and share it amongst the leadership and military (to fund real estate purchases in Pakistan and in the rest of the world). This is a vast criminal enterprise, not a country. This is a criminal enterprise with a military (that swallows much of the public funds) with a country attached. India should derive no comfort; the intent of every Pakistani politicians is causing of harm to India, cry about everything that is occurring in India. Maybe in Imran, whether he survives or not, will take his money - open an office in London - and claim his clients are all the leading nations who come to him to solve their problems. He did offer to solve the US-China relationship.