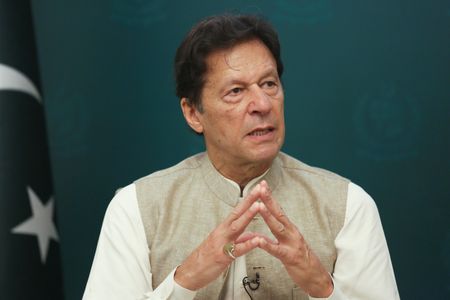 Islamabad, Apr 10 (PTI) Pakistan Prime Minister Imran Khan was removed from office through a no-confidence vote held in the wee hours of Sunday after a day of high drama, becoming the first premier in the country’s history to be sent home after losing the trust of the House.

The joint Opposition – a rainbow of socialist, liberal and radically religious parties – secured the support of 174 members in the 342-member National Assembly, more than the needed strength of 172 to oust the prime minister on a day full of drama and multiple adjournments of the lower house. No prime minister in Pakistan’s history was ever ousted through a no-confidence motion. Khan is the first premier whose fate was decided through a trust vote. Earlier, two separate no-trust motions failed respectively against former premiers Benazir Bhutto in 1989 and Shaukat Aziz in 2006.

Also, no Pakistani prime minister has ever completed a full five-year term in office. Khan, 69, was not present in the lower house at the time of voting. His party lawmakers staged a walkout during the voting. However, PTI’s dissident members were present in the house and sat on the government benches. The removal of Khan has set in motion the process to elect the new leader of the house.

The combined opposition has already named Shehbaz Sharif, president of Pakistan Muslim League-Nawaz (PML-N) as joint candidate. He could be elected as Prime Minister by Sunday. Shehbaz vowed that the “new regime would not indulge in politics of revenge”. “I don’t want to go back to bitterness of the past. We want to forget them and move forward. We will not take revenge or do injustice; we will not send people to jail for no reason, law and justice will take its course,” Shehbaz said in his speech after the voting result was announced.

After Shehbaz, Pakistan Peoples Party chairman Bilawal Bhutto Zardari took the floor and congratulated the house for passing a no-trust resolution against a premier for the first time in history. The opposition had filed the no-confidence motion on March 8, setting a set of events leading to the day of voting and rise in the tension due to Khan’s insistence that he was being targeted as part of a “foreign conspiracy” with the collaboration of top opposition leaders.

Khan, who came to power in 2018 with promises to create a ‘Naya Pakistan’, was dogged by claims of economic mismanagement as his government battled depleting foreign exchange reserves and double-digit inflation. He apparently also lost support of the powerful Army after he refused to endorse the appointment of the ISI spy agency chief last year. Finally he agreed but it soured his ties with the powerful Army, which has ruled the coup-prone country for more than half of its 75 years of existence and has hitherto wielded considerable power in the matters of security and foreign policy.

Khan wanted to keep Lt Gen Faiz Hameed as the spy chief but the army high command transferred him by appointing Corps Commander in Peshawar. Prime Minister Khan lost majority last month after some of the coalition partners decided to part ways while several dissidents openly defied his authority. A special session was convened in the light of the verdict by the Supreme Court which on April 7 declared as unconstitutional a ruling by the deputy speaker to reject the no-trust move against Khan.

There were many twists and turns throughout Saturday, which started with the National Assembly meeting at 10:30 am but after half an hour it was postponed until 12:30 pm. It reconvened at around 3:00PM and it was announced that voting would be held at 8:00pm. But again the proceedings were postponed twice – the last time at 8:00pm to restart proceedings at 9:30pm. But the NA reconvening was delayed as the Prime Minister called an emergency cabinet meeting and the speaker, Asad Qaiser, held meetings with various officials.

Finally, it started at 11:45pm and Speaker Asad Qaiser announced to step down as it was not possible for him to continue. He also nominated Ayaz Sadiq of Pakistan Muslim League-Nawaz to chair the session, who immediately started the voting process. The voting began just before the change of the day but Ayaz Sadiq was forced to adjourn the proceeding for 2 minutes to restart after the change of the date.

In another twist in the political drama, Prime Minister Khan summoned a cabinet meeting in the PM House. He got approval to share the “conspiracy letter” with the speaker, chairman senate and chief justice. Qaiser twice rushed to the PM House to meet Khan and he tendered resignation when he came back after meeting him for the second time.

Khan also met with a team of his favourite journalists, who are known for defending him in the talk-shows, and rejected rumors about making any change in the army leadership. He told them that would not resign and “fight till the last ball”. He also informed the media persons that he was not interfering in the process of implementation of orders of the Supreme Court to hold a no-confidence vote.

As the process of voting was being delayed, the chief justice of the Supreme Court became active and he reached the court along with fellow judges, apparently to take cognizance of any violation of the order of April 7. Similarly, the chief justice of the Islamabad High Court ordered his staff to open the court so that he could proceed accordingly if needed on any issue.